It was great to get a chance to catch up with Louisiana native and  “bell-bottom country” artist Lainey Wilson in the run up to the release of her hotly anticipated debut album ” Sayin’ What I’m Thinking” ( check out our album review here https://thinkcountrymusic.com/whats-new/lainey-wilson-sayin-what-im-thinkin/ ) .
As always her passion for her craft shone through, and I’m sure the week long celebrations she has planned for the release will be a blast, starting off with her stepping back onto the Opry stage this Saturday which is surely the best way to begin?
I hope you enjoy out chat…..and maybe try to imagine her fabulous Southern accent in her replies! 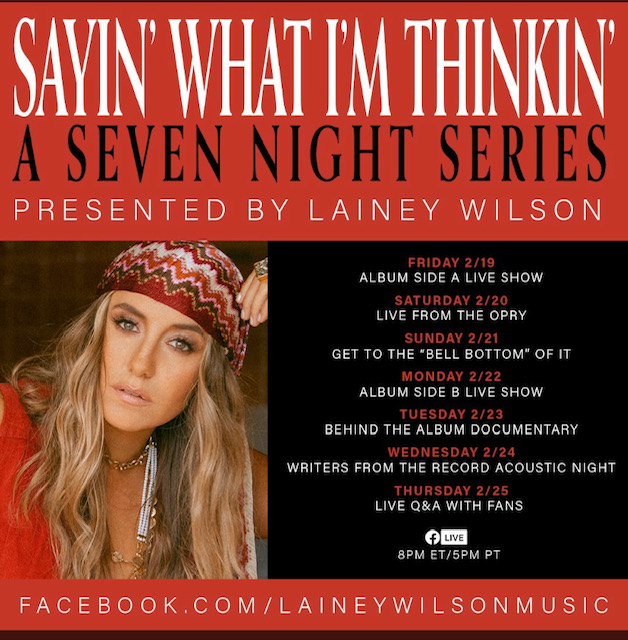 1. LH Hi Lainey!
LW Hey, what’s going on girl? You look warm and cosy!
LH Ha, my boiler broke down in our recent freezing weather and only got repaired a few hours ago so my house is like an igloo! And I gather Nashville now has a cold snap…
LW Oh my goodness, bless your heart!! Yeah we’re iced up here and won’t be moving for days!
LH But come Friday we can all warm up by dancing around to your album!

LW I’m good with that, I can do that!

9.LH  I’m so happy that the album will be available in vinyl format shortly,  red vinyl too I gather, very appropriately. It’s my favourite way to listen to albums, no shuffling or skipping of tracks ‘cos in my mind artists decide the order of the track listing for a reason….do you agree?

LW Oh yes, absolutely. we do take a whole lot of time and dive into that. I love putting on an album, listening to it from top to bottom,  and trying to figure out ” I wonder why they put that there?” and then it all makes sense and tells a story, and that’s the cool part about it. I have my record player over there.  It’s a body of work and we took a lot of time on ” Saying’ What I’m Thinking” wondering where it was going to go and tie it all together.
LH Yeah, to me the opening and closing tracks in particular couldn’t go anywhere else …the opening bars on ” Neon Diamonds ” heralds the entire album ….

LW Thank you, that was the goal! That introduction , the drums at the beginning, kind of feels like a show opener, it just worked, like ” Let’s get everyone to enjoy a live show!

10.LH And talking of live shows,  I’ve been fortunate enough to catch you performing here in the UK several times….what’s your overriding memory of your visits here and how surprised are you that your music resonates with country music fans outside the US?
LW You know, i would never in a million years dreamed that that first of all country music would be a thing over there, you know? That’s a long ways away from where I grew up . But that’s the cool thing about it , we’re all a little more alike than we think! No matter where you grew up, really and truly we’re all pretty much somewhat raised the same. Country music is my heart and my soul, the only thing I’ve ever known, and it’s so cool to see people latching on to it and loving it. I tell you every single time I get to go over there it just gets better and better! The first time I went it was for Country Music Week 2018, and I was like ” no one’s going to know me from Adam” and they probably didn’t ’til they saw my name on the flyer, and they went and learned every single song! It means so much to me that somebody would take the time to look my stuff up and be prepared for the show. It blew me away …honestly, people over there on the other side of the world were singing my music back at me before people over here! I will never ever forget that and as long as y’all keep on having me back I’ll be there because it does my heart some good!
LH We’d have you back here tomorrow if we could! Hopefully at some point in the near future anyway, fingers crossed!
11.LH In the meantime, how’s the rest of 2021 shaping up for you …as much as plans can be made at the moment!
LW It’s looking good right now you know. We’ve got some shows on the books,  hopefully they do happen, I’m sure they’ll be socially distanced and all of that,  June is looking like we might be getting back on the road with a few shows . And I’m also getting back into the studio, cutting more songs, i feel that now more than ever people need music so I’m just going to keep cranking them out!  And really taking this time I’m NOT super crazy busy on the road to really dive into my songwriting because there will probably be a time in my life that i’m so busy on the road I don’t have time to focus on that. So it’s gonna be good. We’ll figure it out…I’m ready of some live shows man I’m telling you right now!
LH Yes I know we all are…..Thanks for your time today, keep warm and I can’t wait see you back over here again!
LW Thanks girl!
Download/stream ” Sayin’ What I’m Thinking ” here  https://laineywilson.lnk.to/SWIT
Go to laineywilson.com for more artist information and links to Lainey’s socials
Enjoyed this read? Don’t forget to check out thinkcountrymusic.com for more interviews and articles….Think Country is always bringing country closer.