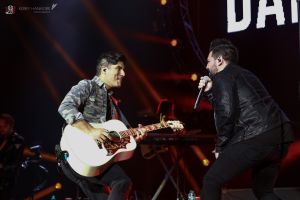 Dan & Shay opened Day 2 of C2C.  I will start by saying I really was NOT looking forward to this act.  I am not keen on their music, I think it lacks strength, it is very samey & gushy!

My mind was changed almost immediately when they burst onto stage with All Nighter.  It was a powerful performance, with yellow strobe lights adding to their stage presence.  Shay said standing on stage he could see a lot of beautiful girls in London!  Nothing Like You followed.  Shay then said “Let’s get this party started!”  As far as I am concerned, he did that 2 songs ago!!  He said “From the left to the right, from the front to the back, lets go!”  This made my friend & I howl as we went to the Isle of Wight festival a few years back & ‘From the front to the back’ was said – a lot, & it became our tag for that year!!

After Stop, Drop & Roll, Shay said he wanted to turn the party up a bit and went into a Bon Jovi cover – You Give Love A Bad Name.  By now I was kicking myself 1) for not looking forward to these guys, but 2) for missing their recent London gig! 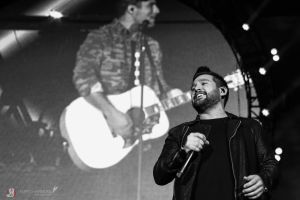 We were asked if London wanted to go on a road trip?  The next song was, rather obviously, Road Tripping!  Shay was doing all the talking, but you could see Dan was happy with this.  After Show You Off, Shay said that the next song was the greatest song they have ever written – From The Ground Up, phone lights went up all round the arena.  When they finished the track the 2 guys hugged!  Shay said this was the coolest moment of their lives, they wrote that song in a basement, now they were on the O2 stage in London & people were singing the song back to them with their phone lights on.  This earnt them a huge cheer!

Obsessed was next Shay then said “Let’s turn this party up!”  Didn’t realise we had turned it down!  After How Not To Dan spoke, he said Shay was one of the greatest singers there is and that they were living their dream sharing the stage together & performing their music to such a large crowd, who were singing with them  19 You & Me finished their set.

I was truly amazed at this performance!  I went from not keen to WOW in just 1 song.  The boys were vibrant and energetic and were so grateful at the response they were receiving, you could see they got quite emotional.  They put on a great show & if they come back again I will be 1st in line to buy tickets!