Cry Pretty, the sixth full length studio album from household name, Carrie Underwood. Now, I have been a self professed fan of Underwood since her appearance on American Idol over a decade ago. It’s exciting for me to see artists grow and find their feet in music and to take that journey with them. I was thoroughly looking forward to sitting down and listening to this record but I can’t help but find myself a little confused.

I will start by saying there isn’t a bad song on the album, which may make you wonder about my above statement. So let me delve into the album a little more and explain myself.

To get us started we kick off with Cry Pretty, the title track and debut single from the album. Co-written by Underwood, Hillary Lindsey, Liz Rose and Lori McKenna this sets what feels like a perfect introduction to this album. Even more so at this point. I am glad this review has taken me a little longer to put together as it’s given that opener more meaning than since the release. It was widely reported on social media about Carries fall back in November that resulted in multiple stitches to her face as well as a fracture to her wrist. More recently she has opened up about suffering several miscarriages before this current pregnancy and it brings her emotion and meaning of this song to the forefront. This is her story and from an artist so suited to tugging on the heart strings of her fans it left me wanting more.

‘Ghosts On The Stereo’ was up next, written by Hillary Lindsey, Tom Douglas and Andrew Dorff. I love this track and it’s a contrast already to what we have heard. Carrie gives a great performance of the song and it is well written and constructed but I feel I am missing something from it. There is a grit that I hear in the song that I don’t feel like I am getting from the vocals. I love Carries voice but I struggling to see her getting drunk at a party, drowning in Jack Daniels trying to act like she doesn’t care, convincing herself she is fine with Hank, Haggard and Jones keeping her company on the stereo. I appreciate not every song need to be indicative of someone’s life but there is just something in there that I feel like I’m missing.

Track 3, Low, starts off with an acoustic strumming and I’m captured yet again with the Country side of Underwood coming back into play. This also is another of her co-writes this time with David Garcia and Hillary Lindsey. This is what I was hoping to hear from this album something a little truer to the genre and a reminder of the Carrie that, I at least, fell for. There is a definite soul in her vocal line that actually I feel shines in this track and delivers it with strong emotion and sincerity.

‘Yeh im Low, and blue. Yeh I’m so lonesome for you’

As we move on through the album the next song is a write from the same set of writers as the previous, this one named ‘Backsliding’, it’s about an old relationship that a pair are trying to get away from but they keep ‘backsliding’ into it and each other. It has more of a current feel with a strong hip hop type beat that is becoming apparent in so many of the new Country tracks being released by many artist. I can’t deny that these sorts of songs fit Underwoods voice but after the last song i was hoping to hear something where the instrumental really followed through on the genre.

Southbound is next and kicks of with a chicken pickin’ guitar with a sound reminiscent of a Little Big Town track, this is more of a fun party Country track and that strong hip hop element is removed in this track and it even has a little ‘Chattahoochie’ type guitar lick part way through the song and it’s pulling me in with the rhythm and the catchy melody. This album is jam packed full of co-writes from this country superstar herself and this is no exception as she penned this with David Garcia and Josh Miller.

The next song however is one of the few that Carrie did not have a hand in. Written by Hillary Lindsey and Jason Evigan we have The Song That We Used To Make Love To. The song is a great song but, maybe this is me getting fed up and jaded by the bro Country era of this music, however…. as good as this song is and as well as it’s been delivered by the artist to me it seems that it would be better suited on an Alicia Keys type album. It’s hard because it’s not a criticism of the song nor of the delivery, it just seems to me that there is a conflict in what direction this record is taking.

Drinking Alone from Underwood, Garcia and Brett James continues the album and brings us something a little grittier, a little darker. The song is about drowning sorrows alone in a bar, the precedent of the song is why not drink alone, together.

I like this song though yet again it seems there is something missing. A grit and a truth to this story that Carries voice just doesn’t seem to deliver. I will round off and address all of this at the end.

Mark Beeson, Andy Albert and Allen Shamblin penned track 8, The Bullet. This is the Carrie that I know and love with a song that takes me back to tracks like ‘Just A Dream’. It focuses on the ever growing problem of guns and the devastating impact they have on families. It pulls at the heartstrings and is delivered with an honesty that is so indicative of Underwood. If you don’t have time to sit and listen to the entire album then make this one a priority, you won’t regret that.

Spinning Bottles, again Underwood, Garcia and Lindsey, follows the trend of the previous song, with regards to the emotion, as the character sings of her alcoholic partner who doesn’t return home. This again is more in the vein of what I’d expect to hear from Carrie and it leaves me feeling a little more content with the record.

Love Wins, her latest single is up next another song written by Carrie and her team of co-writers from ‘Drinking Alone’. This seems to have been a hit with her audience, a pop country track it’s another solid song and I think very suited to Underwood. It’s a powerful song and as always the delivery from this powerhouse vocalist with tracks like this is on point. Its relevant, relatable and a solid track.

Coming back to my confusion though we are introduced next to ‘End Up With You’, Lindsey, Brett McLaughlin and Will Weatherly, which is a huge contrast to the previous 3 songs. There is nothing even remotely Country about this track, which of course doesn’t have to be a negative however I am sitting here reviewing an album by a Country artist. It’s a great track and on its own it deserves that accolade and it has the premise of being a great mainstream radio single.

Then what do you know after that little detour we are reminded of the country, family orientated Carrie Underwood with Kingdom, co-written with Chris DeStefano and Dave Barnes.

A soft, emotional song which I can only imagine is a tale which has many tie to her relationship to Mike Fisher and her little boy and one on the way. This personal touch to the album is one of the few things that really makes it a Carrie album.

Finally the bonus track, Champion, the song that Underwood recorded with Ludacris, a song used for a variety of sporting events across the USA. It was a successful song but having the record finish on this yet again leads me to question what I have actually listened to.

To sum this up, somehow… each song stands out in its own merit on this album. However there seems to no real thread through this record with where Underwood sees herself as an artist. We go from country to pop to a contemporary hip hop/r’n’b feel. I am all for seeing artists grow but this feels confused. Like Carrie doesn’t really know where she wants to be and this is her album to test the waters.

For me I have always been more of a fan of her Country side. Her vocals are perfectly suited and it’s always seemed to be where she is most comfortable, one listen to her cover of You’re Lookin’ At Country on Loretta Lynns tribute album and you can hear that.

This has been a tricky review because I can’t say it’s a bad album. It’s not. It’s just not what I expected and I think that the mix of songs gets a little to diverse for it to have any direction within the genre that Carries audience sits within. I think with this any further albums from Underwood are really going to concrete where she wants to be and as much as I hate to admit it, it seems to me that Carrie Underwood is yet another great country artist we are losing to the mainstream pop/hip hop world.

Jillian Jacqueline ” Side B ” Review 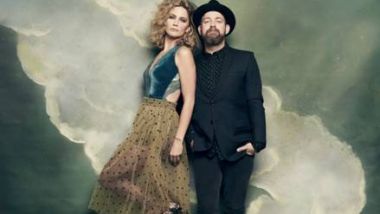