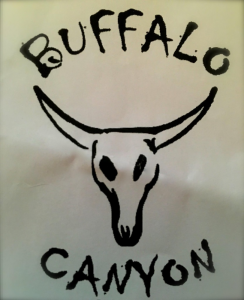 After another successful Grievous Angel Promotions gig at The Hut in Corby, I managed to have a quick chat with local support band Buffalo Canyon’s frontman Colin Mcgreevy…

Introduce yourself and the band to me Colin…

Buffalo Canyon are a five piece unit from Corby, Northamptonshire that are deeply influenced by the Alt Country Scene.  We are myself on vox and acoustic guitar, Gary Grant on lead guitar, John Conway on banjo, accordion and harmonica and backing vocals, Shaun Wilson on bass and Craig Morrison on drums.

Where do you draw your musical influences from and tell me about starting your band?

Our influences come from a wide range of music from ‘old school’ Country to Punk.  We try to combine all our genres and styles together – that’s what gives us the small cult following we have.  We started the band when I was approached by Gary and asked if I wanted to sing with them, as it was the style of music we all liked.  And we clicked.  This band is different, we work well as a unit and enjoy playing together.

Why Americana out of all the different genres that have influenced you?

Why we picked Americana?  This is a hard question as everyone has a different opinion to Americana and what it’s about.  I guess when you have something different that’s not exactly Country and it’s not exactly Folk it just gets a new tag.  That’s why we went down the Americana, Alt-Country route.  We didn’t want to be too Indie or too Country.

Tell me about your support slot at The Hut, supporting Don Gallardo…

Opening for Don Gallardo was a strange one for us because we don’t normally play like that.  We normally play as a complete unit, bouncing off one another’s stage presence, so to be stripped back like that with just myself and Gary was a challenge, rearranging songs – but I think we pulled it off well.

How can people who want to hear more, access your music?

People can find our music on our YouTube channel under Buffalo Canyon.  You can also find us on SoundCloud and we also post our new songs and shows on Facebook first.

What is the one song you had wished you’d written?

Well, that would have to be Ryan Adams ‘Come Pick Me Up’.  Sometimes, I kick myself for letting that slip by, haha!

It has to be Led Zeppelin – they had the balls that Pink Floyd lacked.

It has to be the UK, ‘cause I live there.  And, they don’t do proper bacon like us!

Buffalo Canyon are playing Foxton Locks Festival on Saturday 18th June along with other Think Country firm favourites, Dexeter, Emma Swindells, The Hardy Band & The Brandy Thieves to name just a few. Visit www.foxtonlocksfestival.co.uk to get your tickets.

Check out their fabulous cover of the Felice Brothers ‘Forever Green’