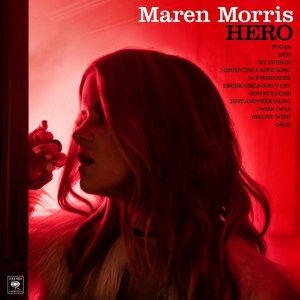 Maren Morris is probably one of the most exciting artists in Country Music today – her  Bluesy single My Church was a massive hit and caught everyone’s attention and her ‘self – titled’ EP, did exceptionally well, citing her one of the most respected and loved artists amongst fans, critics, other Country artists and songwriters. It seems everyone would like to either work with her or record one of her songs. Some of her biggest fans are fellow Texans such as Miranda Lambert and Kacey Musgraves.

Maren seems like a fairly new artist, but has actually been in the industry a long time – not just as a singer but as a songwriter, writing songs recorded by Kelly Clarkson, Tim McGraw and Brothers Osbourne, to name a few. She has also released three other albums independently.

Maren’s EP is probably one of my favourite releases from any artist in the last few years. With a voice that I would describe as an “in tune” Rihanna, she has so much power and strength in her voice, bringing a totally different style of singing to Country Music.

This album does not disappoint; most of the songs from her EP fortunately made it to the album, apart from The Company You Keep- although that song did make it on the Target exclusive version.

Maren has a large variety of genres in her music, covering cool Country, Funk, Soul, Bluesy, Reggae, Rocky kind of sounds, that she is almost a genre in herself. I think Maren would do very well as a mainstream artist in the main charts and not just Country charts but I guess it depends on whether the mainstream radio DJ’s would give her the time of day.

There are a number of stand-out tracks on this album and it is hard to pick out favourites, but I have to say Second Wind, Drunk Girls Don’t Cry, 80’s Mercedes and My Church are. It seems the best were mostly on the EP.

Sugar – a Bluesy Funk style song; a bit darker musically than the songs on the rest of the album. It is not really a very catchy song like some of the others, but it’s a nice song to listen to, and I really like the bridge too.

Rich – the first song that was available before the full album was released.  This song reminded me straight away of Little Big Town’s Pain Killer. It has that same Caribbean type rhythm and same style vocally to it.

My Church – originally released on her EP. It’s not a religious song, which many think it will be. A nice use of lyrics, with homage paid to Hank Williams and Johnny Cash and a salute to Highway FM Radio. This song has a very Country Blues feel, which I assume is also meant to have a little bit of Hank and Cash’s style to it. A very memorable song.

I Could Use A Love Song – a ballad and a love song of course! This song, I would say, is the most ‘Country’ song on the album. It’s one of those songs you may dismiss upon first listen and then later becomes your favourite track off the album. I can see this being recorded by one of today’s popular artists – possibly even Kelly Clarkson. After all, the two do have certain similarities.

80’s Mercedes– originally on the EP – a nice song about a Mercedes, which the title gives away. Apparently Carrie Underwood wanted to cut this record, but Maren had reserved it for herself, which in my opinion was the right move. As much as I love Carrie, this song suits Maren more and Carrie would surely have changed the lyrics, as she was born in the 80’s and the chorus goes “I’m a 90’s baby in my 80’s Mercedes”. This is a wind-your-windows down song in the sun – or rooftop down in your convertible.

Drunk Girls Don’t Cry – another track also featured on the EP and was my favourite from there. A nice reggae type melody to it. A song about pretty much being fed up with a friend taking back an ex over and over again. I really like the style of the lyrical content in this song.

There’s a fine line between an accident and an L-O-S-E-R.

How It’s Done and Just Another Thing are probably my least favourite songs on the album – they are still good songs but ones I may skip from time to time. The intro to How It’s Done, reminds me of Bjork, who I love! There is a lot of organ use in that song too, which is nice and gives it a bit of a gospel church feel, mixed with R & B Country. Again, many cross-over genres in both songs, as most of her songs seem to have.

I Wish I Was – originally on the EP – has an element of Eric Clapton’s style and a bit of Soul mixed with Country Blues. A down beat song with a lovely use of guitar and the entire melody, is stunning, despite being sad.

Second Wind – originally recorded by Kelly Clarkson. Never having listened to Kelly’s version before this release, I went on to listen to it. There is not a huge difference in the two and both artists have such undeniably strong voices, it’s hard to say who sang it better. However, overall I do prefer Maren’s version as Kelly’s is more pop which, as a pop artist, it would be. It is such a good song and I am so glad Maren decided to record it. The melody is really nice with a nice regular beat. The chorus is catchy and I love the lyrics. Probably my favourite on the album.

Once – another Rhythm and Blues/ Soul sounding track -very fitting for the last track of the album. Again, not one of my favourites – it is nice, but just not one I would personally choose to listen to very often.

I think there will be a lot of speculation about whether this album is Country or not, but good music is good music, so does it really matter?

You can buy Hero here: