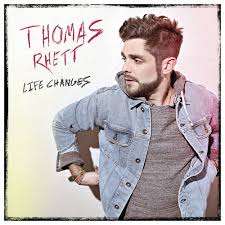 Life Changes is Thomas’ 3rd studio album and for me this is an artist who gets better & better with each album he releases.  This is by far my favourite of his albums and I liked it immediately on 1st play.  Often with albums I have to listen several times before it grows on me.  Not so this album.

One thing I quite like about Country music is the amount of artists who collaborate; you never know who is going to pop up or when!  This happens with the 1st track on this album – Craving You features Maren Morris.  Maren’s harmonies really compliment the track, in which Thomas’ love for his woman is something he just cannot resist or fight.  Can’t help but think if a woman had written it chocolate would feature strongly in the lyrics!

Unforgettable talks about the 1st night Thomas met his girl and how despite being drunk & pretending not to be, he can remember every single little detail of the night.  Had me Googling and then craving a mango-rita, which is mentioned several times!!  It is a toe tapping feel good song & you almost feel as if you are with them in an open air bar on a warm summers evening!

Sixteen is a song of youth, it starts with Thomas at 15, wishing he was 16 with all the freedoms it brings.  He gets to 16 & he still has limits on him, he wishes to be 18 & then 21.  Finally he gets to 25 & laughs about his younger self wishing he was 16!  Think it is something we all did in our youth & then we look back at ourselves wishing our lives away & wondering where the years went!  Quite poignant!

The next track is a real treat for the ears!  Thomas is joined by his dad, Rhett Akins (interesting fact here, both father & son full names are Thomas Rhett Akins!  Thomas now needs a son & he can perform as Thomas Akins!)  Rhett actually co-wrote this track & with a title like Drink A Little Beer you just know it is going to be good!  The song is about a bunch of friends partying & playing music, I hear this & I imagine them jamming in a field on a sultry summers night.  The best thing for me though is at the end when the song goes into some fiddle playing & Thomas & Rhett have a little conversation between themselves with Thomas saying it is weird having his dad on his record & ending with Rhett saying “I taught you everything you know son, but not everything I know”!

We come right down in tempo for Marry Me.  This is a tale with a twist in the tail!  It starts by describing the wedding his girl wants & how he will be there in his black suit, but then comes the twist, she is getting married, but not to him!  It is an age old song of unrequited love and it is beautiful!

We stay with the slow tempo with Leave Right Now.  This track is a bit odd with an 80’s electric type sound used for the chorus.  Very Thomas Rhett, using different genre sounds in the same track!  Thomas is at a party, has met a girl who came with a different fella & now Thomas wants them both to take off somewhere quieter & get to know each other.

Smooth Like The Summer brings the tempo back up & again is a feel good track.  It has a funky sound to it and again I envisage a hot sultry night with no cares in the world apart from having fun!

We then come to the title track of the album – Life Changes, it shows how you are planning your life, but then a spanner appears in the works – ‘You make your plans and you hear God laughing’.  It is an autobiographical track about Thomas’ life so far.  It goes to show how far Thomas has come in such a short space of time, from writing a bunch of songs in college & now those songs are available to buy.  It is also his story with his wife, Lauren, who he met in 2nd grade.  He proposed when they were both 22, but Thomas knew he had to keep hold of her.  I particularly like the line –  ‘And I wrote a little song about holding her hand and now everybody wanna die happy, man’.  The best part though is where Thomas & Lauren decide to adopt a baby girl from Uganda, whilst it is all going through, Lauren falls pregnant – ‘Yeah that’s two under two, hey, what can I say?’  The underlying theme though is that despite the obstacles in his path, Thomas wouldn’t change it for the world.  I love both this track and the sentiment!  The John Lennon line ‘Life is what happens to you while you’re busy making other plans’ has long been a motto of mine, this song is a similar concept.

We are in another bar with When You Look Like That.  Again a lady is driving Thomas to distraction, playing it cool is an impossibility.  I am not sure about changing gin & tonic to tonic & gin just so the rhyme fits though, that is a bit of a no no, it is ALWAYS gin & tonic, just like Ant & Dec, you never say Dec & Ant do you??

We change musical directions completely with Sweetheart, it is a definite 50’s doo-wop type croon, it even starts as if it is a crackly vinyl!  It is a stunningly beautiful song written for Lauren.  It is the type of song every girl dreams of a man writing for her.  Lauren sure is 1 lucky lady!!  There are other songs hidden in the lyrics too – I fall to pieces for example!

Kiss Me Like A Stranger is a track where life has got in the way of their relationship and they need some time to get reacquainted with each other.  This track has a funky type sound to it, a sound that I feel is fairly common to Thomas’ songs.

For Renegades we are back to a dating couple.  Thomas wants to lead his date astray – not too much, as he has promised her father she will be alright, he just wants her to let loose a little & cause a little trouble.

In Gateway Love, Thomas is talking to a girl he used to date, but she found someone else.  He obviously still has feelings for her and is torturing himself that the other guy doesn’t make her feel the way he did, but she is happy with her new man.

Grave is another wonderful love song and again you can’t help but feel jealous of Lauren that she captivates Thomas this much.  ‘When the good Lord calls me home and this life is through
I may be six feet deep, but I’ll still be lovin’ you’.

Once again Thomas has used an eclectic choice of sounds and genres in this album.  He is not afraid to experiment, and never has been – we have a mixture of funk, soul, RnB & Country.  It is funny how the most Country track on the album is the track his father is involved in!

As I said at the beginning I really like this album, but it is up against some corkers that have all been released at a similar time, including Old Dominion, who will be supporting Thomas when he comes over to see us again in November!