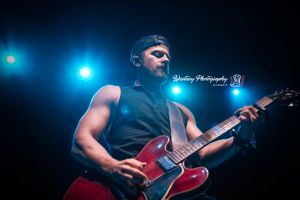 Friday night at the O2 Empire in London saw Kip Moore back in the capital for the final show on his headline tour for 2017 here in the UK. I had the pleasure to not only review the show but also to photograph the man in action!

Due to a very large number of photogs in the pit that night we were split into 2 groups and given one song to shoot! Group 1 would have the first song of the night and group 2 the second. When I received my pass it was branded with a number 1. I was instantly disappointed… No artist ever comes out on stage for the first song and really gets into it for some great photos, it usually takes that one to warm up… or at least that is what I thought!

The venue was packed with familiar and unfamiliar faces, all eager to see and hear what Kip had to offer. The house lights went down, the stage lights went up and Moore burst onto the stage, I always forget how much fun he is to shoot and with an explosive performance from the first song I already knew we were in for a treat!

After taking some pictures I headed up to take my place in the audience. Everyone was captivated by both Kip and his band as they went through the setlist with songs like Wild Ones, Just Another Girl, Beer Money, Come & Get It… and we weren’t even half the way through!

Since his first trip to the UK performing at C2C in 2015 he has continued to build his audience and be part of that growth is something exciting to watch. Every time I see Kip perform I am always impressed and this night was no exception, his vocals were flawless and his band were on point. Everyone looked like they were having fun and that translated to the audience too. The whole band performance is a setting that he excels in however there is something true and honest when he strips this all back with just his guitar.

As he reached the end of his performance he and his band played an incredible rendition of U2’s – Still Haven’t Found What I’m Looking For. A popular choice it seems this year with Miranda Lambert and her band also choosing the same cover on their recent UK tour. Each of his band members joined in to sing the title line at the end of the track before they left the stage to just Kip and his Gibson.

Just recently we heard the news that music legend Tom Petty had passed away, a name that has influenced so many artists over the years in one way or another. Kip Moore is no exception to this rule. Armed with only his acoustic, he filled the O2 Empire with ‘Learning To Fly’ by the late, great, Petty. It showcased his vocals in the rawest form and showed everyone why he was standing on that stage to a sold out show. As the words echoed around the venue, the words being ever so poignant with Petty’s recent passing you could hear the audience joining in, hooked on every word. He followed this up by playing Hey Pretty Girl; ‘the way it was written’.

After this he brought his band back to the stage to close the show with a few more songs including his hit Somethin’ Bout A Truck.

As the lights went down, Shepherds Bush erupted with cheers and applause to bring the man of the hour back out on stage; of course he obliged.

After an acoustic version of Guitar Man he closed the show with Last Shot.

A true talent in the country music scene right now, what Kip Moore brings to the table is energy, enthusiasm and a whole lot of authenticity. He is who he is and he does what he does. There is a sense of rawness throughout his music that, though has been challenged by commercial labels and the industry as it is today, still shines through.

With the announcement he will be back for C2C 2018 it won’t be long before we get to see this talent yet again! I for one can’t wait to see what more he will bring as we head into the new year.