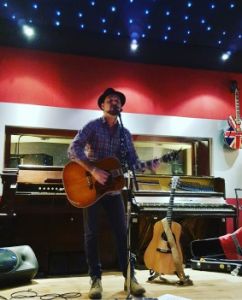 The prestigious Dean Street Studios provided the intimate setting for Steve Young’s showcase for his upcoming album Troubadour, bringing together a collection of international fans, friends, pledgers and press.

In a room with a wall lined with Noel Gallagher’s amps and a ceiling full of twinkling lights, ‘Out Of Our Minds’ was the first song on the setlist, and is also the first song on the Troubadour album. As a newcomer to Steve’s music, the first thing that grabbed my attention was how incredible his vocals were. After a guitar swap ready for the second song ‘Truth In Life’, Steve explained that his favourite thing about this song was that the album version has his family and friends singing with him on the last chorus. ‘Old Friend’ followed this, and had a much more bluesy feel.

‘Nuture’ was one of my favourite songs of the evening, based on an incident Steve witnessed while driving along the M25. He saw a mother sat cuddling her child in the middle of the tarmac, after they were involved in a car accident. He wrote the song about how protective a mother is over her child when they find themselves in awful situations. ‘Hold Me Close’ was dedicated to the couple who had travelled from Minnesota in the USA. There was also a lady who had made the trip across from Japan to be there.

Steve’s music career first took him from his home on the Isle of Wight to London, where he was part of a rock band. He has played with the likes of Lionel Richie before becoming a touring guitarist for Darren Hayes. The album Troubadour is named after a period in Steve’s life where he worked on ships, with most of the songs on the album written during this time. With a drum pedal background and the sound of crisp new guitar strings, ‘With Me In My Dreams’ was entrancing.

He politely obliged when the audience cheered for an encore, finishing with upbeat song ‘Norwegian Girl’, complete with a whistling tune before the lyrics started. Dean Street Studios has seen the likes of Ed Sheeran and Adele walk through there, and it was the perfect place to be introduced to Steve’s music. I can’t wait to listen to the full album.

You can find Steve on tour opening for Carlene Carter in June. Troubadour is released July 1st.