What do you get when you take a multi-instrumentalist/songwriter/producer from Chicago and mix it with a Nashville native with a musical background?  Something magical, that’s what.

Klaus Luchs, a classically-trained guitarist, who also plays just about any other instrument set before him, initially moved to Nashville to seek out new opportunities after feeling he’d exhausted most avenues in Chicago.  Esseri Holmes grew up in Hendersonville, Tennessee, a northern suburb of Nashville, surrounded by people who worked in the music industry.  She even did a good amount of singing herself back at Hendersonville High School, often with classmates who were children of artists.  Her father, Ken Holmes, is also a songwriter.  It’s hard for many people to fathom how much music enveloped her daily life growing up in Hendersonville, but to her it was just what was normal.  After high school, she left music behind, instead going into modeling and acting in New York City and has also worked in media. 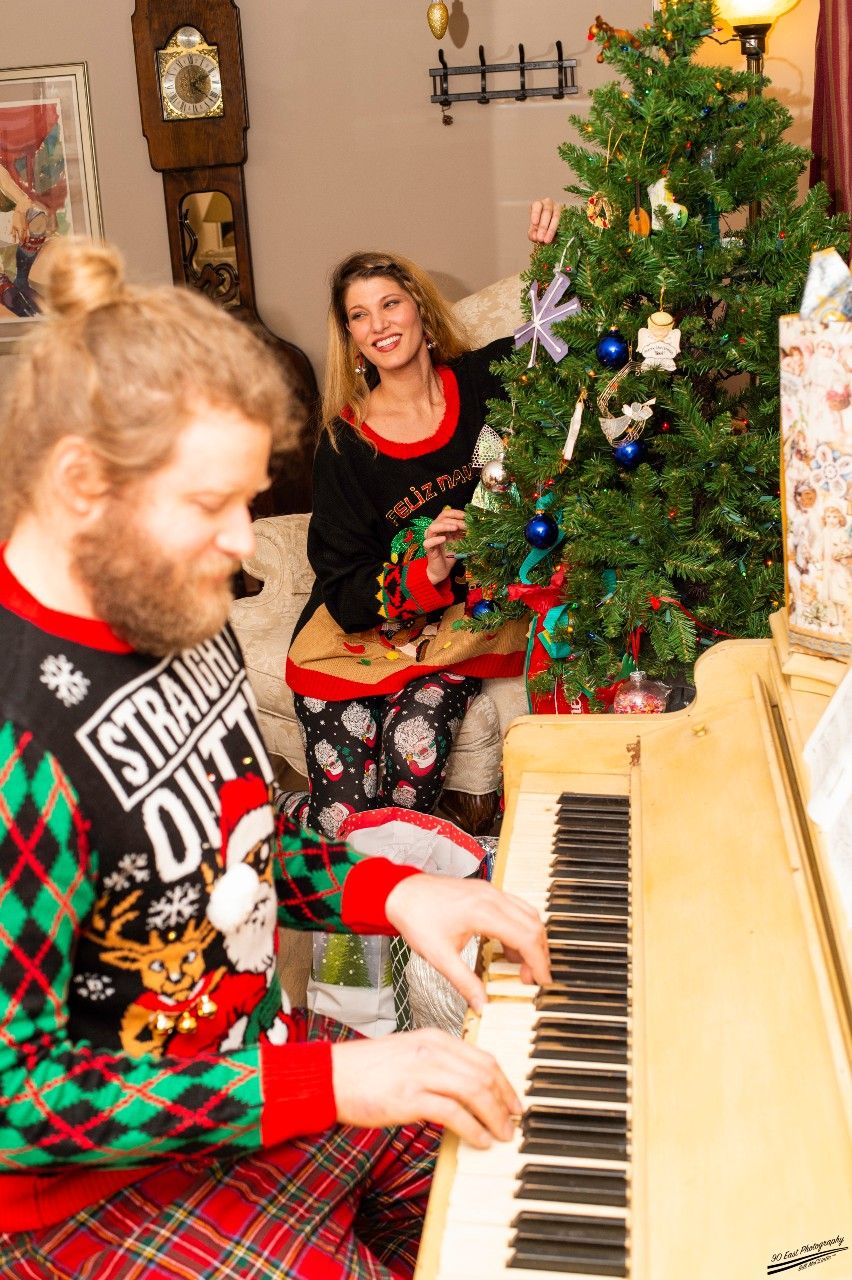 Unlike Holmes, for Luchs it’s always been about the music.  He attended Northern Illinois University, Chicago College of Performing Arts and took master classes at The Peabody Institute of  The Johns Hopkins University.   He played in bands in Chicago, most often in the lead guitarist role, one of which had him traveling to Nashville semi-regularly.  It was during this stint that he learned to fall in love with Music City and knew he wanted to move here eventually.  It was a land ripe with opportunity for someone with his set of skills.  He also had a goal to get into developing music for film and television, and he knew his chances were much better in Nashville.

Holmes had her own adventures living in Manhattan.  While working in New York, she often rubbed elbows with some very interesting characters.  Before she was a worldwide superstar, Holmes called Lady Gaga (then just known by her given name, Stefani) a close friend.  “I knew even then that she was the best performer I had ever come across,” says Holmes.  Even though music wasn’t her main focus, Holmes still dabbled in it while pursuing other things in the Big Apple.  Holmes and the future Lady Gaga  would sometimes throw song ideas back and forth at each other.  She wasn’t quite as outrageous in those days, but she still had something uniquely rock and roll going on.  She was also a really good friend to have on your side.  She wasn’t afraid to speak her mind, and she was especially adept at letting men know where they could take their unwanted advances.  “She was, and still is a great friend to have,” Holmes says with a smile.

Fast forwarding, Holmes eventually returned home to Nashville and Luchs ended up here as well.  They didn’t meet right away, it was several years actually, however, they have since become a couple and recently realized they could even work together.  It was upon discovering that Holmes could sing, and sing quite well, that their new project, DVM, was born. 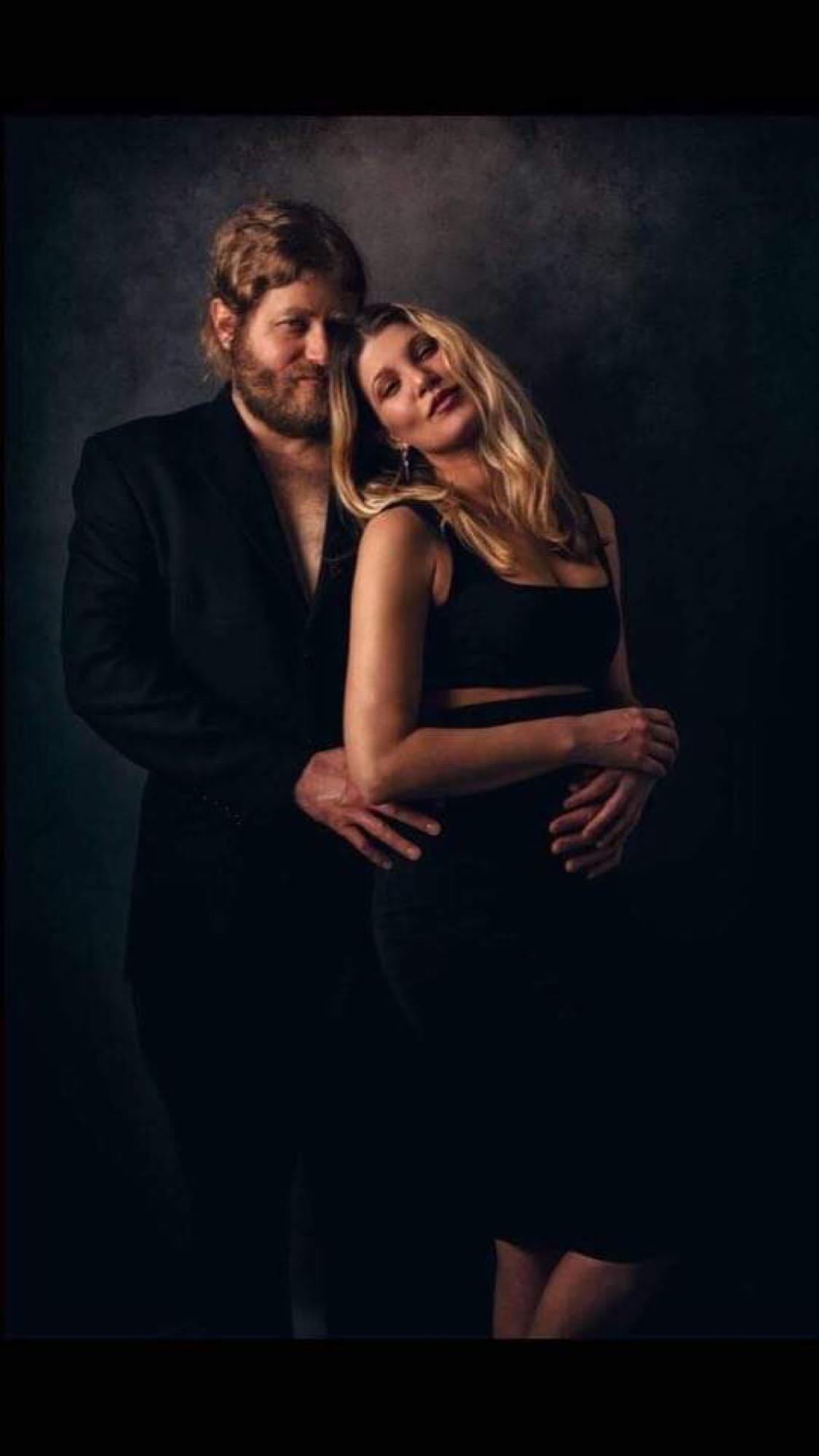 Luchs had a dream of one day becoming involved in music for film and television, and in the last several years, that dream has come to fruition.  He has been, and continues to be, successful in that field.  In addition, he’s released his own solo albums and has numerous songwriting and production credits.  A humble guy that doesn’t fire off a list of things he’s done, Luchs is much happier in his studio creating rather than bragging on himself.  If he wanted to, he would have every right to boast, his work is in demand, and quarantine has been a bit lucky for him.  “It’s been a year of yin and yang,” he says modestly.  For all the madness that 2020 has brought, there’s been a glimmering bright spot for him.  What makes it even better is Holmes is now not just a life partner, but one-half of DVM, and their collaborations are already going places.

DVM, which is actually an acronym based on a couple of nicknames that Luchs and Holmes have for each other, is an all-inclusive music project.  What that means is exactly what it sounds like, everybody is included.  The music they create is meant for all audiences.  Luchs was quick to point out that when writing music for film or TV, “the cleaner the better,” because unless a client specifies that they want off-color language or adult themes in their soundtrack, they will almost always grab the song most likely to not offend anyone, no matter what the actual content of the story.  So, you can be certain that anything from DVM will be okay to play in a home occupied by people of all ages.

So, where’s the track record?  Where exactly is DVM‘s music going?  That’s where things get a little tricky.  Luchs and Holmes would love to tell us, but they just can’t.  Not yet.  That’s because they’ve only been working under the name DVM for a relatively short time and all of the projects they have worked on are for shows that have them under strict non-disclosure rules.  They do, however, have a website where you can hear three of their Christmas songs right now.  While these songs are being looked at for use in possible television and film productions, they are available for the public to listen to by clicking here https://www.hotdvm.com/

Each of the Christmas songs on the DVM website was produced by Luchs.  He played every instrument.  Holmes handled the vocals.  While the first two songs, “Deck The Halls” and “Angels We Have Heard On High” are new arrangements of classics, the third, “Holiday” is an original, penned by Ken Holmes.  Since we happen to be right in the thick of the holiday season, there’s no doubt that all three are making their big debut at the prime time.  Luchs mentioned that even after the holidays are gone, there will be no shortage of demand for that type of music.  It goes on all year long.  While the rest of us are packing up the decorations, there are film productions that have their eyes still firmly implanted on all things Christmas.  The search for new holiday music is always on, especially with networks such as The Hallmark Channel and Netflix forever pumping out new Christmas movies.  Another bonus to creating music for holiday films is the repetitive nature in which they are shown on TV.   Everybody’s watching them at any given hour around the world, and many people can’t get enough.  They’ll watch the same ones over and over.  That turns into a lucrative paycheck if your songs are picked up.

What else is happening with DVM?  It isn’t all about Christmas.  In fact, a spring rollout of new country music is just around the corner, again, much of which can’t be talked about just yet, but I did get to hear a couple of their other songs.   Two of those were for a client that was looking for music designed to fit a film surrounding a “female vigilante”.  They both had a bit of a western flavor, with what I’d describe as a slow burn.  Gritty and a little intimidating, and totally fabulous.  Once again, Luchs was the man behind all of the instrumentation and the production, while Holmes laid down highly-convincing vocals on both.

From the family room of their comfortable Hendersonville home, I was able to listen to these tracks and hear music that I may be able to hear on either the silver screen or my own TV in the future.  That’s so very Nashville.  It’s an honor really.  It was fantastic hearing Holmes describe DVM as a “quarantine dream,” something productive and meaningful that she and Luchs are growing together.  The fact that their work is already being noticed by the right people is the perfect way to put a positive cap on 2020.   They are both passionate about this project, but as Luchs points out, it’s also fun.  “I need to have fun while I create,” he stresses.  Also, it may be of interest to know that some of the songs this duo has written and recorded may end up on an album.  Should that happen, they have complete freedom on how they present the songs.  Lyrically, they can say whatever they like, because they aren’t restricted the way they are when writing specifically for a film or television show.  They both agreed that’s always a good time too, because they let their imaginations run wild, but for the most part, they want their music to be heard by everyone, so they enjoy writing all-inclusive lyrics. 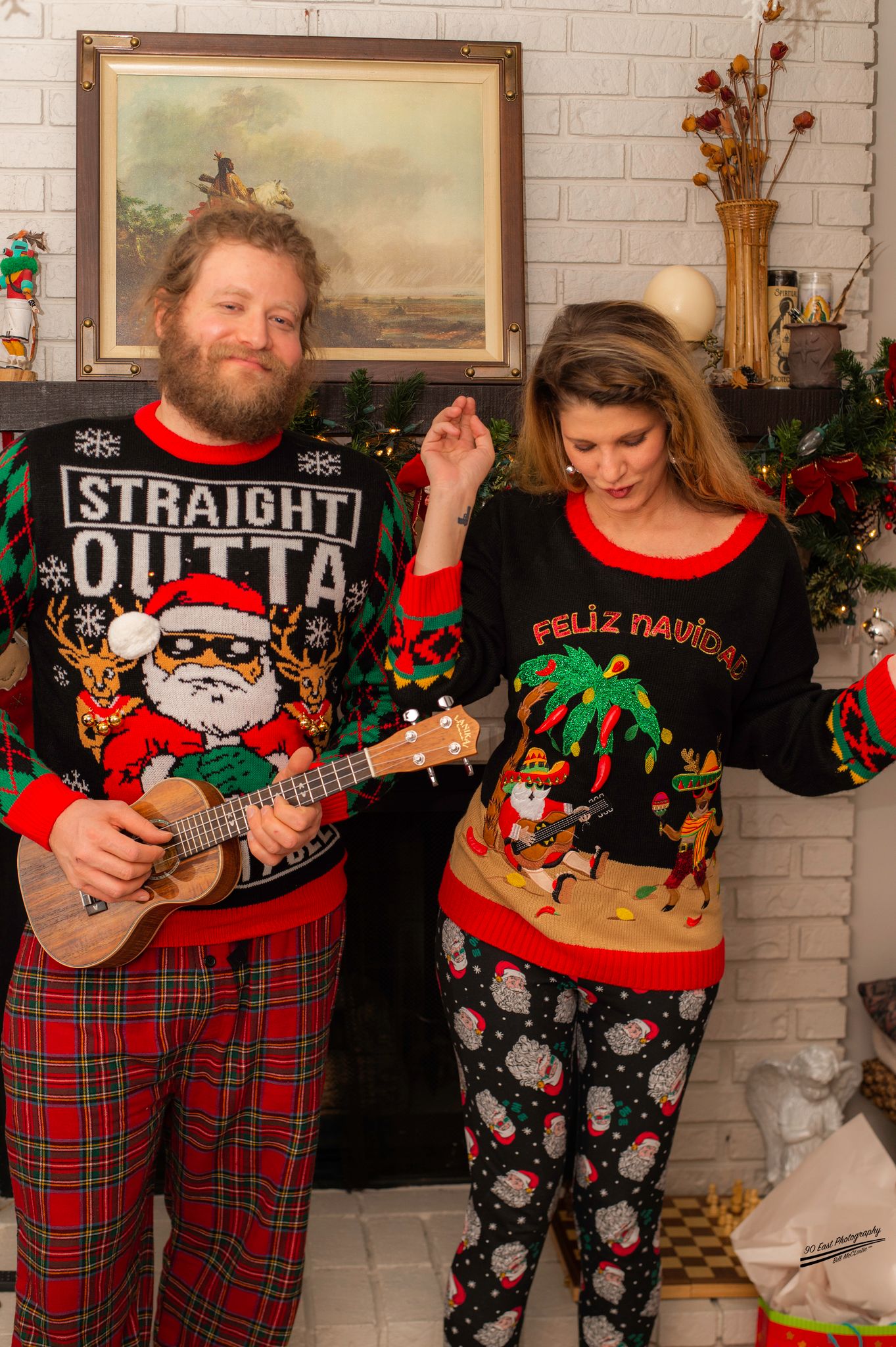 Being in the company of both of them today, dressed in their favorite “ugly Christmas sweaters” and sitting in the cozy winter wonderland they’ve crafted in their home, it’s more than apparent that there’s no shortage of fun with these two.  The old saying, “If you like what you do, you’ll never work a day in your life,” seems especially perfect for Luchs, Holmes and DVM.   Two talented individuals who’ve already lived their own lifetimes of successful endeavors have found each other.  It was a real gift to witness such happiness this holiday season.  Yes, Virginia, there is a “quarantine dream.” 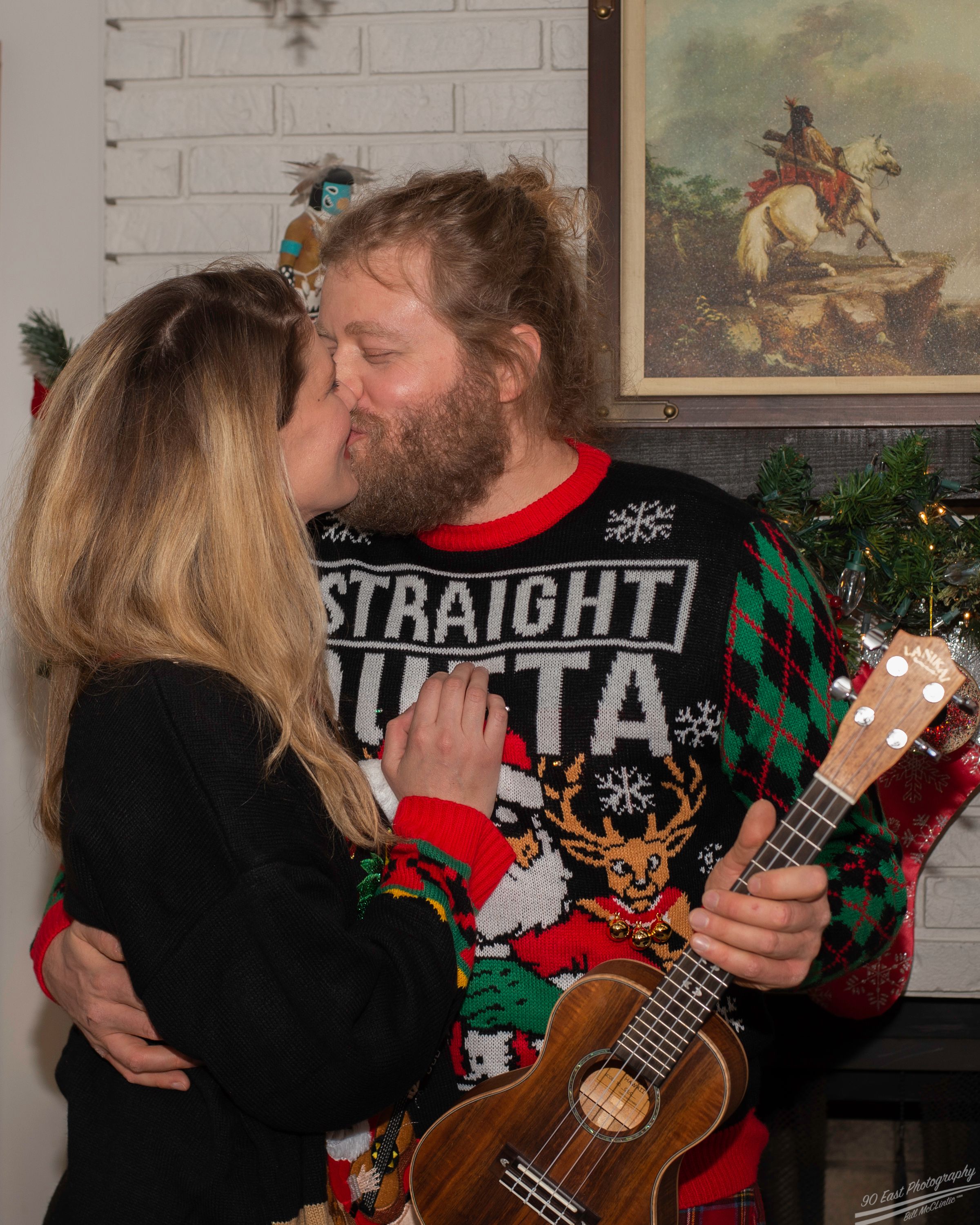 REVIEW: Cory Marks – Who I Am