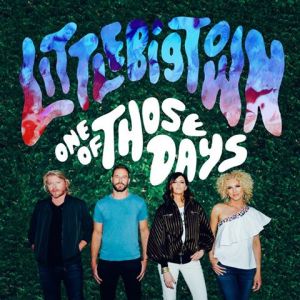 If any of you have read my review on Little Big Town’s single One Of Those Days, then you would have read that I was not a fan. Since Little Big Town later confirmed that the new album with Pharrell was just a side project, I breathed a little easier. This is not to say I dislike Pharrell, because I don’t – the man is undeniably talented and I used to be a fan of N.E.R.D., as well as enjoying a lot of his solo material. I was just a bit worried that we had lost the Little Big Town we love so much.

One Of Those Days is still not my cup of tea but I have to say, I am really liking the rest of the album. I thought that I would – I had this feeling that, after being so critical, (which I felt pretty bad about, because Little Big Town are so lovely), I would eat my words.

Wanderlust is very different from what we are used to from the band – but that is kind of the point. The rest of the album is so much better than One Of Those Days and I kind of wish that they had released one of the other songs first. I think the fact that the vocals were not so clear on the single was what partly upset me.

The album has a real mixture of wonderful sounds; a wide range of instruments, funky beats and fresh vocals with a different range we are used to hearing from the band. The different genres on this album work well and are a fantastic mix of 1960’s R&B, Reggae, Ska, Rocksteady, Gospel, Jazz, Soul , Blues and much more. With only eight songs, it is a fairly short album but definitely one worth seeking out, especially if you do enjoy a mix of various types of music.

I feel that I now understand a lot more why Little Big Town chose to do this project. For a band who have been around as long as they have, I guess they wanted to dabble in their art a bit further and if someone like Pharrell, with his talent and calibre wants to work with you, you aren’t exactly going to say no.

So, words eaten, pride swallowed, I put my hands up and say, “You know what? I love this album!”

I have shared my thoughts on the tracks below.

One Dance – This song has a 70’s disco element to it which reminds me of Nile Rodgers’ work. Karen Fairchild takes lead vocal, with the rest of the band on the chorus and Jimmy doing all the additional vocals. I can see myself dancing in a disco-funk club to this and being perfectly happy about it.

C’mon – featuring Justin Timberlake. Justin has been all over Nashville since performing at the CMA Awards 2015 with Chris Stapleton, so his part in this song isn’t a total shock. His role is very minor and I didn’t notice it at first. This is a nice 60’s R&B type of song with parts of it having a very Gospel feel.

One Of Those Days – Well, I said this song would grow on me since my rant and it has. However, it is still not my favourite song – in fact, I would say it’s my least favourite on the album. I do really like the Caribbean intro now, though.

Work – a Reggae/Ska/Rocksteady song, which has a funky twist to it. As a fan of Ska, I love this track and it has a lot of Soul in it too. The Ska stroke is spot on and makes me want to dance and go to a Ska gig.

Skinny Dippin’ – Bluesy, R&B with a SKA stroke. The vocals are all harmonies in unison throughout, which suit this style of music well. I guess it is a given that Little Big Town can sing anything.

Willpower – has a funky rhythm to it which reminds me slightly of Groovejet by Spiller feat Sophie Ellis – Bextor. It has a Hawaiian vibe to it too, which is nice.

Miracle – is another 70’s disco style track. This song has a nice jazz piano accompaniment

The Boat – I really love this song, too. The harmonies are great in this song, with overlapping verses and chorus, with a bit of Bebop.

I recommend having a listen to it, to decide for yourselves as, no doubt, this album will have a lot of mixed reviews.

Listen to Wanderlust by Little Big Town on @AppleMusic.