Little Big Town – One Of Those Days 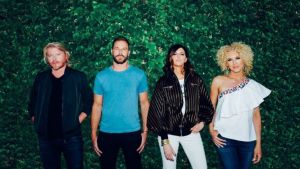 So it seems the Country Music world has gone a bit mad. Since Taylor Swift successfully crossed over to the Pop world full time, it looks as though other Country artists are trying to dip their toes into the sea of Pop – but the question is, why? Taylor Swift was leaning towards Pop for some time anyway, so that was never really a surprise to anyone. With Taylor writing her own music and always having her own style that set her apart from any other genre, whichever direction she took would always have that Taylor element we love and, as a fan, I always trust her decisions. But with all the other artists jumping on the bandwagon lately, such as The Band Perry, Thomas Rhett, Danielle Bradbery, Keith Urban and more recently Little Big Town, is it all getting just a little bit too weird? Although Little Big Town do write or co-write their own music, I am curious to know whether writing this song and their new album with Pharrell Williams was their idea or the label’s?

One Of Those Days – written by LBT and Pharrell Williams – is so far removed from what we are used to hearing from Little Big Town, that it first raised concerns that they had abandoned Country Music altogether. However, Little Big Town have confirmed that this is just a ‘fun’ project and that a new Country album will be released later this year. Thank goodness for that! I can forgive them and will go back to the song, listening to it with the knowledge that it is not classed as a Country song.

Upon my first listen, I was rather taken aback and thought to myself, ‘whats’s going on here?’From a band which has such perfect harmonies and strong vocal range, their voices do not seem to blend well together at all on this song. It sounds a bit like they just stumbled into the studio after a session of ‘day drinking’, started singing over each other and added a Caribbean themed backing track to it – which sounds similar to Dario G’s Sunchyme, especially with the ‘Hey’ vocals added. This will likely be more of a production issue rather than their singing abilities. I am assuming this song is meant to be their summer anthem, much like Pontoon and Day Drinking were, but the difference in standard between those two and One Of Those Days is quite a stretch.

I don’t think this song is the worst thing to come out of Nashville recently – if I can even say it came from Nashville, seeing as the song was never intended to be released as a Country song.  With the intention of it being a Pop record by a Country band, it is still better than The Band Perry’s ‘Live Forever’ by a country mile and perhaps the song will grow on me. Maybe in a couple of months I will be driving round town with it playing in my car full blast – but right now? I am just not keen. I think it will split the critics and fans though. Loyal fans will love it, new fans may emerge and others will just be left a little disappointed. You really need to go and listen to it though and hear for yourselves.

An 8 track album is to be expected this summer, with a Country album later in the year. I will always be a fan of Little Big Town and it pains me to be so critical – they are the loveliest people in Country that I ever had the privilege to speak with. I am all for artists experimenting to a degree, but I feel when it’s an artist so loved and suited to a certain style, then it is not the best move. However, at the risk of sounding repetitive, they say it is just a fun project for them -let’s hope that really is true. I am however, looking forward to hearing what the rest of the album sounds like.