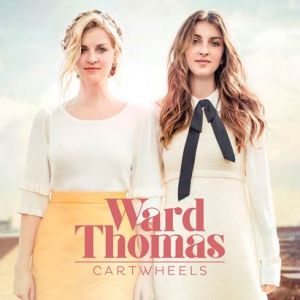 The lovely UK Country duo Ward Thomas have returned with a new song Carry You Home, leading up to the release of their second album Cartwheels. Catherine and Lizzy have had an exciting year career-wise; the success of their first album, From Where We Stand, which is released on WTW label, enabled them to have a joint deal with WTW and Sony records – and they truly deserve it!

From Where We Stand is one of my favourite albums ever! I am so excited about the new album and have high hopes for the standard of material that they will deliver.

The girls announced last night ( June 9th), during a hilariously failed live video chat, which took several attempts until they finally managed to get the words out, that their new album Cartwheels will be released September 9th – and that if you pre order on iTunes you will automatically receive the song Carry You Home, immediately.

Carry You Home is set to be the first track on the new album. The song goes right into an echoing and beautifully haunting vocal from Lizzy, before Catherine joins her in unison for the rest of the song, accompanied by a steady drum beat. This gives the song a Folk- Country sound, which they are no strangers to – as various tracks on From Where We Stand have a similar style. The chorus is very powerful and is very anthem like. Overall, this song shows off the girls’ undeniably beautiful vocal range, with Lizzy being the power house and Catherine bringing her raspy melodic sound. Whilst different, their voices fit together like a hand in a glove – the twins certainly know how to complement each other vocally, with flawless harmonies throughout the song. This is a really lovely song and has a nice exciting rhythm and I love every bit about it.

This is a definite step up from their previous material, which is difficult to admit to, because I simply cannot fault any of their previous album. Their music, so far, seems to have grown with them and I am very eager to hear the rest of the album. I am extremely pleased to see that not only are we getting 14 tracks on the album, but that fan favourites Cartwheels and Almost Easy will be on the record. Both those songs have been played at various live shows over the last year. Cartwheels was performed in front of 20,000 people at London’s O2 Arena during the Country 2 Country Festival in 2015.

With Bob Harris being a massive supporter of Ward Thomas, I have no doubt in my mind that Carry You Home will receive a lot of air play on BBC Radio 2 and will hopefully make the A list/Playlist.

Cartwheels will be released September 9th and can be pre ordered here:

And on CD here:

And on Vinyl here: