ALL IN FOR THE GAMBLER: KENNY ROGERS FAREWELL CELEBRATION’ FULL OF SURPRISES AND EMOTIONAL MOMENTS 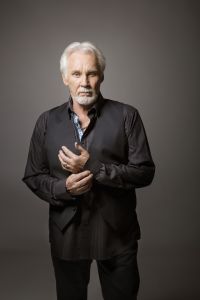 Kenny Rogers’ musical career has touched many different styles of music throughout various generations, and his farewell performance to Nashville, All In For The Gambler, served as a reminder of the musical impact that his career has had – and will continue to make for years to come. An all-star cast of Rogers’ contemporaries – and many of today’s hottest musical artists – turned up last night (October 25) at the Bridgestone Arena in Music City to pay tribute to the Country Music Hall of Fame member, who is in the midst of his farewell tour, “The Gambler’s Last Deal.” Perhaps the most emotional moment of the night belonged to Dolly Parton, who teamed with Rogers one last time on their 1983 hit “Islands In The Stream” after surprising both Rogers – and the audience – with a heartfelt performance of “I Will Always Love You” to her friend and collaborator. The two also reminisced about their lengthy friendship – which dates back to a Rogers appearance on her syndicated TV show from the mid 1970’s – almost a decade before they first teamed up. The two also closed out their performing career together with the Grammy-nominated “You Can’t Make Old Friends,” a single from 2013.

The evening was a mixture of song performances that balanced many of the singer’s iconic hits – as well as many of the early days of Rogers’ career as the lead vocalist of The First Edition. Jamey Johnson paid tribute to the singer’s versatility with a raucous take on Mickey Newbury’s “Just Dropped In (To See What Condition My Condition Was In),” a First Edition hit from five decades ago. The Flaming Lips shined the light on “Ruby, Don’t Take Your Love To Town,” with Reba McEntire tipping the hat to the group’s “Reuben James.” Elle King gave a jaw-dropping performance of “Tulsa Turnaround,” one of the First Edition’s lesser-known tracks – that Rogers himself recorded for his 1979 album Kenny. Rogers’ fellow Texan Kris Kristofferson paid tribute to the band’s cover of “Me and Bobby McGee,” which he wrote.

Of course, the main focus of the evening was on the record-setting solo career Rogers embarked on in the mid-1970s, and those hits were on full display during the evening. Justin Moore nodded to the beginning of the singer’s hit making era with “Lucille,” with spellbinding performances taking place from The Oak Ridge Boys (“Love Or Something Like It”), Chris Stapleton (“The Gambler”), and Lady Antebellum (“She Believes In Me”). A special moment took place with the appearance of Don Henley – who once lived with Rogers and his family – to perform the classic “Desperado,” which Rogers cut in 1977 for his Daytime Friends album.

Many of the 80’s and 90’s hits of the singer were featured during The Gambler’s Last Deal as well. Billy Currington delivered a sensual take on “Morning Desire,” with Lady Antebellum’s Charles Kelley and Idina Menzel teaming up for “We’ve Got Tonight,” a 1983 Rogers hit with Sheena Easton. Two of the singers’ most frequent collaborators figured prominently in this era with appearances with Lionel Richie giving a beautiful take on “’Lady,” a number one Pop and Country hit that he wrote for Kenny’s Greatest Hits album in 1980, and Alison Krauss saluted the singer with a pristine version of his romantic ballad “Love The World Away.” Another incredible performance came from Lady Antebellum’s Hillary Scott and mother Linda Davis – who has toured extensively with Rogers over the years – uniting on stage for the singer’s 1987 chart-topper “Twenty Years Ago.”

There were several other great musical moments during All In For The Gambler, with Naomi and Wynonna Judd reuniting for “Back To The Well,” and an all-star group of Rogers’ former opening acts paying tribute to the icon with a sing-along performance of his 1982 hit “Blaze Of Glory,” including Travis Tritt, The Gatlin Brothers, Kim Forester, T.G. Sheppard, Crystal Gayle, Lee Greenwood, T. Graham Brown, and Billy Dean.

Blackbird Presents’ Keith Wortman, creator and executive producer of Nashville’s recent highly acclaimed “Sing Me Back Home: The Music of Merle Haggard,” is the creator and executive producer of “All In For The Gambler.” GRAMMY® Award Winner Don Was served as music director, and presided over a stellar house band backing the performers at this historic concert event taping. Kenny Rogers’ manager, Ken Levitan, also served as executive producer. The event was filmed and recorded for multi-platform distribution throughout traditional media (worldwide broadcast, music, and digital).