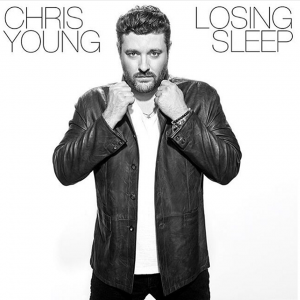 Losing Sleep is Chris Young’s seventh studio album and has been eagerly anticipated by his loyal and new fans alike.  His incredible performance at this year’s Country to Country festival in the UK cemented Chris’ status as one of the best country artists of the moment, and he has a voice that is, in my opinion, virtually unequalled by his peers. With an impressive back catalogue of hits culminating in his first number one album – I’m Comin Over – including the brilliant Think of You ft Cassadee Pope and Sober Saturday Night with the magnificent Vince Gill, it’s a hard act to follow.  Follow he does effortlessly, with another super-slick, tight production by Chris himself and a co-write on every single track on the album. This 10 track, 30 minute tour de force doesn’t disappoint.

At first listen I’ll admit I was like, is this it? It seemed quite short by today’s album standards and although I instantly loved it, there was nothing too unexpected that jumped out at me. A couple of listens later and I’m slipping into that voice-induced state (if there was a medical term for it I’m sure it’d be diagnosed as ‘Youngcoma’), where the smooth crooning and rich baritone of Young’s voice transcends any doubts as to the non-ground breaking choice of song matter. There is no doubt that Chris is THE go to artist for love songs, break up songs and just feeling downright sexy songs. The overtly sexual lyrics just make this album ooze sensuality from every pore. No more so than in the self-explanatory Leave Me Wanting More & Radio and the Rain, a steamy little number that cleverly uses atmospheric pressures to crank up the steam rating tenfold.

This is a solid album with 8 great, radio-friendly tracks and 2 absolutely knock ‘em dead songs – Where I Go When I Drink & Blacked Out respectively, both incredible ballads full of heartache that showcase Young’s voice and talent flawlessly – and absolutely NO filler. Losing Sleep opens with familiar ‘Bieberesque’ pop overtones and a sexy guitar hook (if you can call a guitar hook sexy) that sets the tone for the rest of the album.  Hangin’ On is a playful, romantic, summery song which flows perfectly into Holiday, a smooth vacation song which would give Blake Shelton a run for his money in the Margarita making stakes.  Yes, I sometimes wish Chris would take a real risk and throw something unexpected or different into the mix, something to wow us and knock us sideways with its originality and surprise factor.  But seriously, why wish for something that’s really not necessary?  Chris admits that Losing Sleep is his most ‘poppy’ country work to date but that is balanced perfectly with an equal mix of powerful, traditional vocals and tremendous instrumentals. This album proves that Young can deliver, time and time again.

With news of a new tour on the horizon which will encompass a visit to the UK and Ireland, the promise of hearing these new tracks live is a treat that every Chris Young fan will be fervently awaiting. I for one will be losing sleep waiting….

Radio and the Rain

Where I Go When I Drink

She’s Got a Way

10 songs, 30 minutes – worth every penny! Download now and visit www.chrisyoungcountry.com for the latest news and updates.