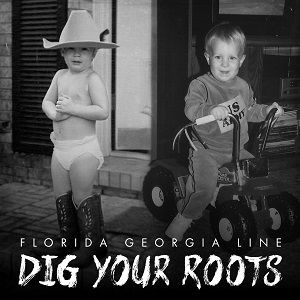 By Paul Nicholson
It may have been two years since they released an album, but Florida Georgia Line return with their third compilation – Dig Your Roots.

For fans of the duo, it is a welcome return. But this album is not aimed solely at the fan-base they have built up over the years since their debut EP “Anything Like Me” was released in 2010.

This collection brings with it a new sound for Tyler Hubbard and Brian Kelley (B.K.). A sound that is softer, more mellow and deeper than anything anyone will have heard, or associated, with them before.

It is a deliberate change of pace and direction for them. This more soulful, more mature, Florida Georgia Line is a sign that they have come of age – you could say they have grown up, musically.

This album will still have their fans lapping it up gleefully, but it will also appeal to fans of a more traditional country sound – dare one say, an older, more reserved audience that consider themselves self-professed connoisseurs of what “proper” country music is.

The signs of a change were there from the pre-released H.O.L.Y., which was put out digitally on platforms such as Spotify in April – a full four months before the album’s release date. If they were putting the feelers out for what reaction it would get from the listening public, then they received a huge thumbs up, with the track sitting at number one on the Hot Country Songs list for 16 weeks.

What they have produced, is a musical masterpiece that is impossible to turn off once you have hit the play button.
Without exaggerating, in my opinion, this CD could go down as a future “Hall Of Fame” album that could be passed down through families for generations as parents try to explain to their kids just why they love Country music so much.

It still features the unmistakeable FGL tones, but in a much more subtle way. It crosses genres, with the heavily reggae influenced “Life Is A Honeymoon” – which features Ziggy Marley, in case anyone was in any doubt – and the R & B soul-sound of their Backstreet Boys (yes… you read that correctly!) collaborated track “God, Your Mama, And Me”.

But it isn’t just these collaborations that cross the musical boundaries. The title track “Dig Your Roots” oozes a soulful sound that is more often associated with Motown than Nashville. The song itself takes a look at not only the importance of family and where they came from, but also what they came from. It speaks, subliminally, of not taking their success for granted, and appreciating how fortunate they are to be in the position they are in – a lesson that many of us should learn.

Then there is “H.O.L.Y.” (High On Loving You). The song is simply a thing of absolute beauty. It is everything great about music…of any genre. An exquisite, immaculately produced, beautifully arranged, fantastically written love song that should be the future wedding song of every bride and groom to be for years to come.

Hot on the heels of it is the following track “Island”. Another love song that every time I hear it – along with “H.O.L.Y.” – reminds me of how much I love my wife and why I married her in the first place. But of course it is not all slow-paced. The opening track “Smooth” is a typically country sounding song, complete with strumming Ukulele, sliding guitar rings and also croaking frogs and hooting owls. You can almost imagine them sitting around a sunset camp-fire having a freestyle jamboree and just playing the song between swigs of Miller Lite and spoonfuls of Chilli.
There is also another collaboration, this time with Tim McGraw, on “May We All”. Another song that will have fans of “proper” country toe-tapping and singing along to in their cars. A song that suggests that you have to have the ability to adapt… or risk being left behind, with the message being summed up in the chorus lyrics “Yeah you learn to fly and if you can’t then you just free-fall”.

I could wax-lyrical about any and all of the 15 songs that make up Dig Your Roots, but I would probably run out of superlatives.The best thing I can say, is to urge… nay… plead with every single one of you that may read this, to listen to the album and see for yourself – It may well be the best decision you will make.