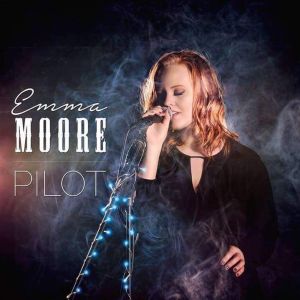 Based in Blackpool, singer songwriter Emma Moore released her first album Pilot in June this year; produced by the UK‘s top Country Music producer Justin Johnson and recorded in the legendary Parr Street Studios. Showcasing some of the best self penned lyrics for a first album that I have ever heard, she certainly deserves some award nominations next year! 8 of the 10 tracks are exquisitely written by Emma herself creating an album that takes you on an emotional rollercoaster through timeless stories of love, break ups and a whiskey track; always welcome on a Country album!

Emma has previously mentioned in conversation with Think Country that she loves the way women craft stories into music and she has certainly excelled in delivering this within her own song writing.

The opening track Before I Fall Asleep begins the emotional rollercoaster and sets the build to the rising and falling theme that runs throughout the journey Emma is beginning to take the listener on.

My personal favourite comes next, I Don’t Know. This up tempo track was the first track to be released and spoke so much to me it was instantly added to my play list and continues to be on repeat!

Alone follows next with its catchy beat that manages to turn what aren’t the happiest of lyrics into an uplifting song with its rhythm and vocal tone.

Emma’s most personal track Daytime Black sees the tempo drop back to the most emotional of heartbreak songs. Allowing a showcase of Emma’s exceptional vocals this track is so stunning it brings you to falling apart with her.

The rollercoaster sets of on another build again with the gentle vocals on title track Pilot into the beautifully harmonic I’ll Say Yes, another fantastically relatable song of an idyllic relationship. Before taking us back down the dip, however this time with momentum meant by the powerfully written and assertive Tired.

The tempo is slowed again for the graceful Paper Roses which contrasts so much with Bottom Of The Bottle next with a darkness that haunts and evokes.

Finishing off the album is a track that builds fabulously, Why Don’t We Lie; not too subtly finishing the relationship rollercoaster where none of us want it too end up, a fantastic draw to see where Emma’s going to take us with her next album!

You can catch Emma out on her winter dates below or check out her website http://emma-moore.co.uk ( Lee )

A 2 Week Whirlwind That Blew Me Away