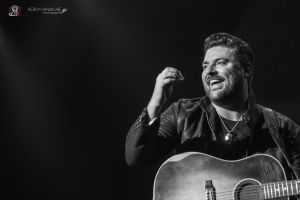 Ok, fan hat off and subjective music reviewer hat on. This is my 3rd time seeing Chris on UK soil; he has already played C2C back in 2014 but lower down the bill. A sold out headline show at Shepherd’s Bush followed and now he finds himself back in London, creeping up the bill and almost at the ultimate, revered headline position. Stepping out into the arena and opening with ‘Underdogs’, the hugely excited crowd erupt with unabashed cheers, as now we all know this festival (and musical outlet for frustrated British cowboys!) is finally getting started. 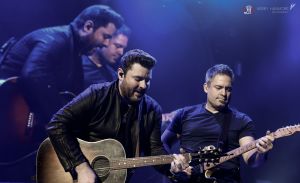 Chris has the ultimate, traditional country music vocals – an effortless, artistic range which can switch from full on, Patron swigging party song to beautiful, sublime ballad in a heartbeat. Pair this with a good natured, unpretentious personality, commanding stage presence and you have a Superstar. He has the 20,000 strong, O2 Arena, eating out of the palm of his hand. Not bad at all for a Southern boy from Murfreesboro, Tennessee.

Sharing the news that his set had just gone live on BBC Radio 2, it was time to ‘up the ante’ and give the listeners a party song – ‘Aw Naw’ almost took the roof off the O2! The hits just keep on coming – ‘Lonely Eyes’ – penned by a song writing friend from Florida rolls off the set list next and then we are treated to the news that as Chris was boarding the plane to England, ‘Sober Saturday Night’ was turning No.1 in the USA charts.

This magnificent pairing of Chris and Vince Gill is made more compelling by the fact that Vince was one of his first concerts as a young boy. There’s another country song in that story – dreams are made and broken in Nashville but that’s a winner right there. 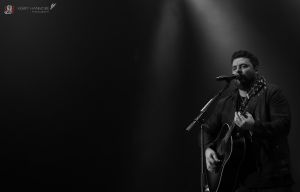 Chris’ versatility just keeps on being showcased, highlighted by a superb cover of ZZ Top’s Sharp Dressed Man. His band are tight and compliment him perfectly. Rock with a southern twang; can this set get any better? Another cover, this time Keith Whitley’s beautiful ‘When You Say Nothing At All’, and then the worst kept surprise of C2C as the gorgeously talented Cassadee Pope makes a guest appearance to rapturous applause. ‘Think of You’ is one of the best performances of the entire festival. Worthy of a Grammy actually, but what do I know?!

More hits keep the crowd dancing in their seats and a hilarious interlude during ‘You’ where he jokes about not always hitting the high notes at the end. Easy peasy, job done – in the wise words of Mr Keith, proceed to party. Big props also go to Terry Crisp for his steel guitar playing during Neon. Just mesmerising.

Chris told the audience that this was one of the best nights of his life; a sentiment that I’m sure is echoed all around the arena tonight by his many fans. The title track to Chris’ latest album ‘I’m Comin Over’ brings his set to a close. A fantastic performance from a truly great, hard-working artist and one of my favourite success stories in the music business. I’m looking forward to dates being announced for a full solo tour and one certainty that I can predict, is that the next time Chris Young comes back to play C2C, he’ll be at the top of the bill.

Underdogs
Getting You Home
Voices
I Can Take it From There
Who I Am With You
Aw Naw
Lonely Eyes
Sober Saturday Night
Sharp Dressed Man
When You Say Nothing at All
Think of You
You
Save Water, Drink Beer
Tomorrow
Neon
I’m Comin Over