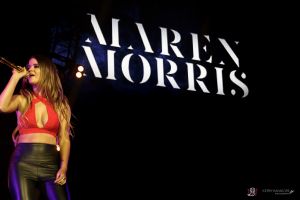 Maren positively bounced onto the stage looking truly FABULOUS, all the men’s eyes popped out on stalks!  She was wearing very tight leather trousers and a teeniy tiny bright red top, not much more than a bikini top really and her waist long hair was flowing down her back!

She started her set with Sugar, followed by Drunk Girls Don’t Cry.  Her microphone looked as fab as Maren, it was all gold & sparkly!  She thanked C2C for having her back and on the main stage, not the Yamaha stage which she was on last year.

After 80’s Mercedes, Maren asked how we were feeling, a big cheer was the answer!  She said she wanted to take it back a notch & she picked up her guitar (which is either huge or Maren is tiny!)  She sang I Could Use a Love Song and Let Me Show You.  She said the next song was an acoustic song and had been requested, Bumming Cigarettes is a bonus track, but it has proved to be so popular Maren is going to release it. 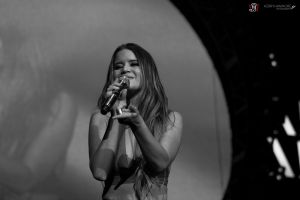 At this point, the difference between Maren and Hunter Hayes yesterday was amazing.  Maren was cool, calm, collected & confident, whereas Hunter had come across as a bag of nerves!

After Just Another Thing Maren said she had never seen so many people!  She said the next song inspired the album, it is a song about being a villain, which is odd as the song is called Hero!

Once and Rich followed, Maren then introduced her band, paying particular attention to the “bad ass chick with the fringe shirt” who was playing bass guitar!  She said she has had a hectic year and the next song she sang last year on the Yamaha stage and was amazed as the crowd sang along with her, that apparently was the craziest thing that has ever happened to her!  She continued saying that music brought us all together and for the next song she needed a gospel choir and that she needed us to sing along.  My Church was the song – naturally!  The crowd were in full voice and when she finished Maren said that that was even louder than last year!

For her last track Maren sang Second Wind, in the middle she went seamlessly into Beyonce’s Halo and then just as seamlessly back to Second Wind.

Some people question as to whether Maren is Country or not (the age old Country or not argument!)  To me, it doesn’t matter if she is Country or not, that performance was spot on!  She looked fabulous and sounded great.  She oozed confidence and was a pleasure to watch & listen to!