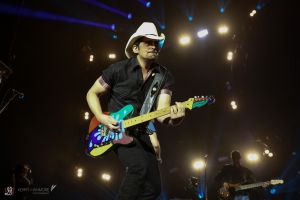 Last act of Day 1 was Brad Paisley. For the final time this evening the lights dimmed and the crowd roared in approval. The words Life Amplified appeared on the back drop and with the theme music of Star Wars playing we were taken on a journey through space on the back drop. We went past a satellite station, towards earth, we came in closer & closer, you could see we were heading for Europe, then England, London & then we zoomed into the O2 arena. He then went straight into American Saturday Night, half way through this song he swapped guitars! 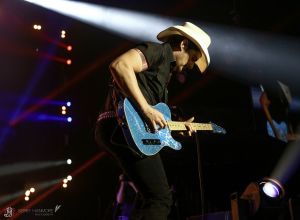 Brad said he has wanted to come back since the last time he played C2C (2014), that every seat had been sold & he was proud to be here. He could see lots of cowboy hats and he was going to play for as long as we wanted him to, with that he went into Water. During this track the fiddle player was very apparent and was sounding superb! During Perfect Storm the back drop was a stormy sea, it made you feel a bit sea sick! Brad had swapped guitars again & was now playing a very funky looking colourful guitar! 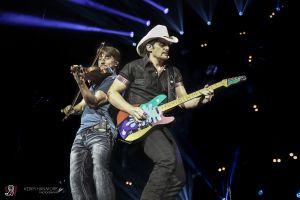 After Online, Brad had another chat with us, he said he loves the British culture, we drive smaller cars and he loves our accent! Looking at us from the stage it was like looking at a British Nashville and it is a small world when we all know the words to all his songs!

After This is Country Music a stage hand brought a guitar onto the stage & gave Brad a sharpie pen, Brad signed the guitar & then looked down at the audience, he selected a young girl and passed the guitar down to her saying “That is how you make a Taylor Swift!” He then swapped guitars again and went into Still a Guy, just as he started, Chris Young walked on stage – to a huge cheer and they sung the song as a duet! They started messing around, they took a phone off a girl in the front row & started taking selfies with it with the crowd as the background! Chris took the mickey out of Brad, saying he was rubbish at taking selfies & to pass the phone over as he (Chris) has longer arms! Both the guys fun sense of humour really came across in this section and it was a real treat to watch it! 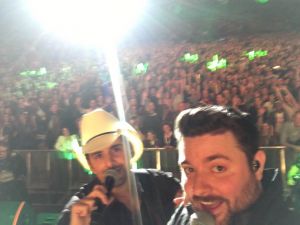 Thanks to Kirsty White for sharing her photo

Chris then left the stage and She’s Everything was next. Part of the way through, Brad took another phone from someone in the front & said he was going to video the guitar bit! Chase Bryant then came on stage with his guitar & joined in, again Brad took the mickey as Chase plays his guitar the ‘wrong way’ – Chase is obviously left handed! Brad swapped guitars again for Ticks.

During the next track – Celebrity, clips of South Park and an animated version of Brad were on the back drop.

Old Alabama was next, after which Brad introduced his band paying particular attention to his newly divorced drummer! The fiddle player then took centre stage as Brad walked down the side of the auditorium to the Yamaha stage at the back. This was no surprise to the people who were there in 2014 as he walked down to the back and performed a couple of tracks on a makeshift stage, before the Yamaha stage was there, perhaps it was him that gave the organisers the idea of the Yamaha stage!

Once he reached the Yamaha stage, his 1st comment was “ You smell of beer back here!” He then thanked the audience for giving them our weekend! He sang Then. He told us he has a new album coming out, mainly observing culture and the stupid stuff people do, this lead him quite nicely into Ashamed of Your Selfie, a classic Brad humorous song! He then continued with the online culture theme and said about Social Media, mentioning Vernon Kaye and saying the internet is forever! I couldn’t help but think that Online would have fitted in better here, whilst he was talking about the internet & social media! 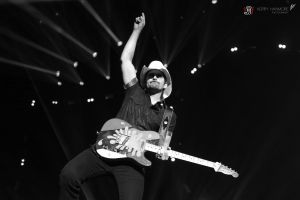 During Southern Comfort, Brad walked back to the stage, down the other side of the auditorium, the side that I was sat on. I am going to say here, that the team of security Brad had with him were overly rough. I had an aisle seat & obviously people came out to get closer to Brad, the security team were overly zealous about pushing people out to the way though, I was behind the line marked on the floor, but I got punched on the shoulder – quite hard, another friend got shoved so hard she nearly fell & it was only a girl behind her catching her that saved her! Why did these guys need such bully boy tactics?

Back on stage and reunited with his band, I’m Gonna Miss Her was next up, with the video to the song palying on the back drop. We were then treated to something very cool. Brad got his own phone out & said “Wait a moment”, on the back drop the screen of a mobile phone appeared and it looked as if Brad was Facetiming a person – C.U. Roadcell. A guy answered, Brad said “Hey Jeff, its that time!” Jeff seemed startled, Brad said “We talked about this remember?” Jeff said “Sure, hang on a minute” and we saw corridors flash past as he ran down round, whilst he was running, Brad struck up with Remind Me and right on time for her section, Carrie Underwood appeared on the back drop and sang her section via ‘Facetime’! It worked really well, several members of the audience really did believe it was proper Facetime, not a recording – it was that good! When they finished Brad said “Has she gone? Good!” Brad and Carrie are really good friends, they present the CMA Awards in Nashville every year and Brad takes the mickey out of Carrie a lot, this all goes to show the strength of the friendship they have!

On with the show and We Danced was next followed by Whiskey Lullaby. Originally this was a duet with Alison Krauss and in 2014 Brad brought Kimberley from Band Perry (who had performed earlier) on stage to sing Alison’s section. I got excited and said to my friend “Jennifer or Cam to join him?” Unfortunately, Brad decided bringing 2 performers on to his stage was sufficient and he only sang the 1st verse! Gotta admit, I was disappointed, but you can’t have everything can you?

River Bank and Mud on the Tyres were next. Brad said the greatest thing about performing for us was that we allow him to be part of our memories! Today followed and then Mona Lisa. Brad then left the stage, but we were not finished, we wanted more! He came back on and Alcohol was his last song. During this song something rather strange happened, a posse of people came on to the stage, obviously members of the audience, but they just kinda stood there awkwardly, not really knowing what to do with themselves! It was a bit bizarre!

I really think Brad’s personality and his sense of humour shone through throughout his performance. Thought the amount of times he swapped guitars was a bit unnecessary – but I can’t play the spoons let alone a guitar, so what do I know?