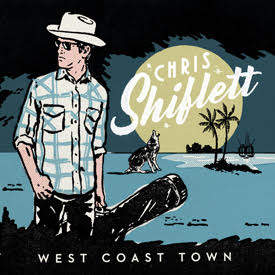 I’ve got to admit I jumped at the chance to review this album for two reasons. One being that Chris Shiflett is the lead guitarist of the Foo Fighters, of whom I’m a huge fan (and seen numerous times in concert), and secondly just sheer curiosity about the direction of this album.  Given that Chris is also a member of punk rock cover band Me First and the Gimme Gimmes, I was excited to see what his third solo album would reveal about his diverse musical channels. West Coast Town is Shiflett’s third solo album, after 2010’s Chris Shiflett & The Dead Peasants and 2013’s collection of honky-tonk covers All Hat and No Cattle.

Chris himself said in an earlier interview that his musical influences could be ‘traced back to his older brother’s love of Elvis, The Rolling Stones and The Beatles’.  Not that these are particularly country, but he was drawn to the ‘twangy guitars’ of which there were plenty on these artist’s albums.

The album was recorded in Nashville under the charge of Grammy winning Producer, Dave Cobb, who is carving out a reputation as a legend, and has worked with both Sturgill Simpson and Chris Stapleton. He has, once again, worked his magic on this album.  Described by some as country punk or rock ‘n’ roll/honky-tonk, I think this is the best slice of country rock with attitude I’ve heard in a while.

West Coast Town has a laid back ‘SoCal’ classic, almost retro feel, while at the same time exudes a party-like, fun vibe that makes me want to roll the roof down on my car and road trip the West Coast.  Then I remember I live in England, not California! Boo…

The album’s opener Sticks & Stones is a Rolling Stone-esqe break-up song. Lyrics like ‘Well we know what we’ve become, and there’s blame enough for everyone’ sets the scene for a story about 2 people who are stuck in a rut of spiralling destruction in their relationship.  All delivered however with a great jaunty tune and not a hint of sadness.

The album’s title track West Coast Town is a really catchy song with an infectious chorus. An autobiographical track about growing up in Santa Barbara ‘back before they chased the working class out’ and full of the ‘twangy guitar’ sound he so covets. ‘Room 102’ is one of my favourite tracks on the album.  A love sick man pining for his old lover after an alcohol sodden night, consoles himself with more alcohol and finds Dutch courage to ring or text her. Problem is she has another man, so he’ll have another beer – and a chaser on the side. A real honky-tonk style pleaser, as is Cherry (in which he also unleashes his impressive guitaring).

I’m still Drunk, manages to mix a punky attitude with strains of Marty Stuart-esque bass and guitar. One thing about Chris, he can really sing about being wasted in a way that you know he has really lived it. He’s been there, done it, and bought the t-shirt. Rock n roll is alive and kicking in huge proportion on this album, and another example of this is on Tonight’s Not Over – a real party song about unabashed, recreational drug use. Don’t try this at home kids…

Still Better Days is a change to the general theme of the album and is a welcome album closing track – paying homage to his wife.  A rockier number, unapologetic of his past actions, ‘I’d do it all again to wake up in the same bed with you’.

West Coast Town is a collection of country rock anthems, chok-a-block full of attitude – call it punky if you will.  I call it genius.  A brilliant album from a really refreshing, current artist.  This is exactly the kind of album that Nashville needs at the moment – a welcome break from all the pop country that has flooded country radio, where song after song just rolls into one. I hope the Alt Country scene embraces him and this is not the only country influenced album we get from Chris as I’m already chomping at the bit for more.