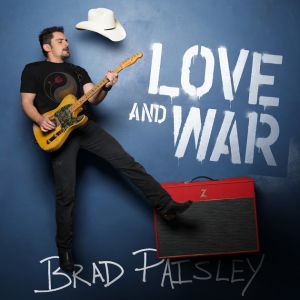 There are no wrong or right’s when it comes to opinions, music can divide many. We like to share both sides of a story. Here are two differing opinions on Brad’s new album.

Let me say straight away, that I’m a big fan of Brad Paisley. I’ve seen him live several times & enjoyed his albums, so three years on from his last, the disappointing “Moonshine In The Trunk”, I was really looking forward to his new offering. Unfortunately, what we have here is the same old, same old. You know exactly what you’ll get with a Brad Paisley album: killer guitar based country rock songs, brilliant lyrics, slow love songs, a couple of humorous numbers & a bit of self-indulgence, but all played brilliantly by Brad & his regular backing band.

But with “Love & War”, the tried & tested formula seems to be running down pretty quickly. Don’t get me wrong, there are songs on this album which will become Paisley classics in time, concert staples & fan favourites. But it’s the fillers which spoil this album. Brad should be aware of the maxim “sometimes less is more” – do you need to put sixteen tracks on an album, especially when one is a pointless reprise of opener “Heaven South?

Of the crackers, “One Beer Can” is typical Paisley, a brilliantly told story song about the perils of having an illicit party whilst parents are away.

“Last Time For Everything” comprises a list of things that come to an end sometimes & is lyrically clever. “Go To Bed Early” is Brad getting horny, a grown up song of lust & quite unlike anything he’s done lyrically. The Mick Jaggger co-write “Drive Of Shame” is a song which could be from the classic Stones cannon, complete with a Keith Richards style opening riff, with Brad & Mick trading lead vocals on what will be a real favourite live.  “Dying To See Her” reminded me in concept & construction of his classic “Waiting On A Woman”, this time with breathy input from Bill Anderson. This is a love song to a lost partner, & describes in Paisley’s inimitable way of how this old man is “dying to see her”

The outstanding track though is the title cut, “Love & War” co-written with former Creedence Clearwater Revival leader John Fogerty. This anti-war song with biting lyrics criticises the treatment of war veterans, & is one of the best protest songs since….Fogerty’s CCR song “Fortunate Son”, all those years ago. With a driving beat, watch out for the video that accompanies the song.

Of the other songs, the much hyped collaborations with R & B artist/producer Timbaland,  are really nothing to write home about. “Grey Goose Chase” has a bluegrassy feel & kicks along, but “Solar Power Girl” is one of those by numbers songs which probably took them no more than ten minutes to write. “Selfie#The Internet Is Forever” which was premiered at this years C2C Festival is just the right side of corny, but doesn’t seem as funny after repeated plays. “Heaven South” is musically “Mud On The Tires” part 2, the bluesy “Contact High” is redeemed by some brilliant guitar playing, & “Today”, the first single should be known to many by now, but doesn’t do anything for me.

“Gold All Over The Ground” probably wouldn’t be noteworthy without the back story to it, the lyrics were written by Johnny Cash which he wrote for his then future wife June Carter. Brad has put these words to music. Result? – a nondescript track unfortunately.

“The Devil Is Alive & Well” is Brad’s second stab at social comment, & final main song “Meaning Again” is an ode to the woman he comes home to everyday, & is nice enough.

I hoped that the days of self-indulgence would be gone now ( the “Wheelhouse” album was full of it ), so again, why the reprise of “Heaven South” as a closer?

Make no mistake, this album will please long time fans & be gobbled up by those introduced to him by his C2C appearances, but I was hoping for more. All the songs are well written, brilliantly played, the excellent songs are just that, but there’s just a little too much filler on this one. That said, the title track is a real belter!

Love and War is Brad Paisley’s long-awaited follow up to Moonshine in the Trunk and is unmistakable as a Brad Paisley album. Musically it’s not a huge move on from previous recordings, in fact you really could take any one track on this album and drop it on any of his back catalogue and it would blend right in. Yet don’t mistake that as a criticism nor does it mean the quality has diminished – it really hasn’t.

Musically he’s on the top of his game and lyrically the songs have a great storyline – whether it’s the witty Beer Can about a lad called Bobby who doesn’t quite cover his tracks after a house party whilst his parents were away, or the sassy selfie#theinternetisforever which we were treated to at C2C this year. Paisley has the ability to write songs with humour whilst never losing the quality of the music – these aren’t whimsical folly’s, they’re bona fide 3 chords and the truth – it’s just that the truth sometimes puts a twinkle in Brad’s eye.

However, the standout tracks on this album are those which are a little more serious – the first single Today has surely been heard by all Paisley fans and does sentimental without the mawkishness that affects so much writing.

Go to bed early is another cracker – I often think Country Music artists have the ability to record something which is sexy and provocative and unashamed of its focus on two people ‘getting it on’ – and yet not be crass, cheap and it certainly isn’t blunt – it’s the tale of a fella wanting to make love to his beloved – end of!

Love and War the title track is an emotive call for fairness for ex-service personnel and by duetting it with John Fogerty of Creedence Clearwater Revival fame Brad has employed the services of one of Vietnam’s most vocally prominent critics. CCW wrote some brilliant political songs in the late 60’s – including one of my favourites – Fortunate Son. Love and War is one of the most political songs I can recall ever hearing from Paisley and it’s a cracker.

It’s a seriously good album, one after another of excellent songs – and don’t think that not picking out some of them by name means I don’t rate it – I do. I’m a fan of Paisley but I do recognise that many of his albums have a track that I could/do skip – there isn’t one on Love and War and that is testament to the breadth of Paisley’s talent. We recently heard him on the couch at the BBC or being interviewed by Bob Harris for Radio 2 explaining that he (Paisley) focusses on the song-writing – because he feels that that’s what his fans require and what makes him the success. He is (by comparison to many) achingly ordinary – probably the fella you would barely even notice if it wasn’t for his ten gallon hat – he isn’t hunky, he doesn’t squint into a camera like he’s about to wrestle a bear and he doesn’t smoulder like some stud – he is the chap next door, which for me magnifies his musical ability and his writing.

I can’t finish this review without mentioning three more songs.

Gold All Over The Ground will be one of the most talked about tracks on Love and War. It was oringally a poem from Johnny Cash to June Carter before they were married and their son John Carter Cash presented Paisley with the hand-written lyrics! It’s a tender love song and Paisley’s treatment of such gold-plated material is highly respectful.

Drive of Shame finds Paisley duetting with Mick Jagger for a very Stones driven rocker – reminiscent of the Stones classic Tumbling Dice. It’s a romp along, good fun and Jagger and Paisley work well together.

However the award for the Brad Paisley This is Country Music and we do moment on an album goes to the sumptuous Dying to see her.

Victor Hugo once said ‘music expresses that which cannot be said and which it is impossible to be silent’– I can only assume Paisley had this in mind when he and Bill Anderson penned this eulogy to a man who was succumbing to death to join his beloved wife in the hereafter. If that isn’t sufficient warning as to the raw emotion packed in to 3.45 minutes then you haven’t been paying attention. It is a stunningly good song, but I’m not sure I’ll ever be able to listen to it again!