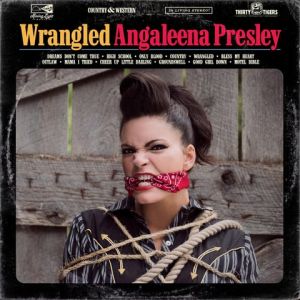 Wrangled is the second solo album from Pistol Annies –  Angaleena Presley, its been 3 years since Angaleena’s debut album and Wrangled is very brave record which she has herself said will make or break her.

This honest and well thought out album, in my opinion should definitely ‘make’her.

The Kentucky native has been on the country scene for a long time but is truly honest in the fact the country music genre is pushing male country artists more than the females.

Angaleena is not a `pop’ country artist, she is the real deal, she has the old school country sound that I really love to hear.  She has written all of the songs on the album either by herself or co-writes which shows how talented and under rated she is.

Some of my stand out songs on this 12 track album are as follows:

Wrangled opens with Dreams Don’t Come True a co-write with her two other Annie’s – Miranda Lambert and Ashley Monroe, an honest account of what her dreams where but in reality it doesn’t always work out that way.

Only Blood co-written with Chris Stapleton and featuring Morgane Stapleton, tells a story about getting revenge from an abusive partner.

Country written by Angaleena and featuring a rap by Yelawolf is probably Angaleena’s most controversial song on this album, she takes a dig at Bro-country, as much as she is friends with a lot of these artists, she doesn’t like that they are so pushed out in front of anyone else.

Wrangled – The title track, a beautiful composition about how women are ‘meant to act’ but she is rebelling against this ideal and being her own woman.

Bless My Heart – this is my favourite on the album, a literal slap in the face to those girls who think they are better than you.  I’d love to give this song to a few people I know!

Cheer Up Little Darling – co-written with Guy Clark which sadly and more poignantly was his last co-write before he sadly passed away last year.  The melody on this song is gorgeous and Angaleena’s voice is perfection.

Good Girl Down – Another co-write with the Rockabilly Queen herself – Wanda Jackson – Angaleena aint going down without a fight and I believe every word she says!  Wrangled proves she is here and she is showing what she’s made of and she is here to stay, no matter how many times they try and stop her! 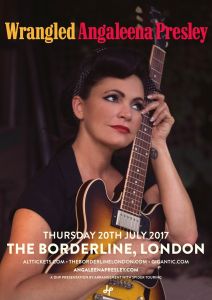