So here it is! This years full lineup for the biggest weekend of country music that the UK has to offer coming our way in March!  However Country 2 Country in London is so much more than a series of 3 nightly concerts at the O2 Arena, similarly to CMA Fest in Nashville there are a variety of other stages taking place during the daytime.  These stages present emerging acts from the United States along with some of the most talented artists from this side of the Atlantic with the opportunity to play for a new audience some of whom may not have discovered them previously.

In past years these “pop-up” stages along with the “satellite stage” in the main arena have brought the opportunity for fans over here to get an early glimpse or a long awaited opportunity to see people who are now massive stars in the genre and many of whom have gone on to play the main stage in subsequent years. The likes of: Sam Hunt, Old Dominion, Maren Morris, Drake White, Jana Kramer, Cassadee Pope, Lauren Alaina, Morgan Evans, Jillian Jacqueline, Delta Rae, LANCO, Ashley McBryde, Charlie Worsham, Danielle Bradbery and Lindsay Ell are just some of the artists you may have got to see for the first time under cover (London in March can be quite unpredictable) and for free! 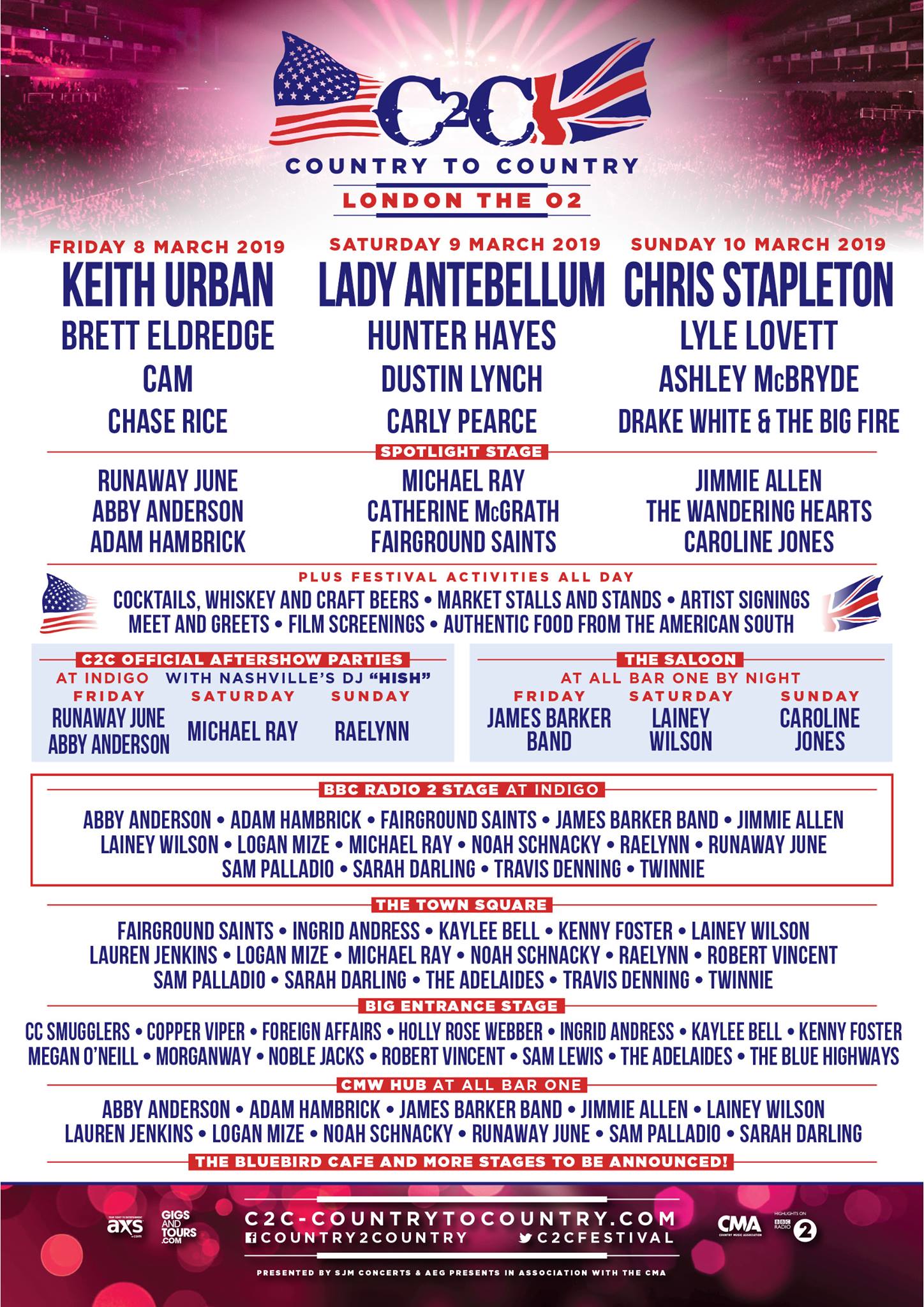 Many people will be excited about the long overdue 1st London performance in 12 years from Keith Urban or the return of Lady Antebellum to these shores amongst all the other fantastic headline artists but we thought we would give you some ideas of the other acts that we think will be the other names on the tip of everyone’s tongue come the end of the weekend and that you don’t want to miss out on:

Runaway June: The mesmerising 3 part harmonies of Naomi Cooke, Hannah Mulholland and Jennifer Wayne gracing these shores was something that many fans and people in the industry over here have really been hoping for (I even requested UK dates in my letter to Santa Claus https://thinkcountrymusic.com/whats-new/dear-santa/) and from seeing the girls live in Nashville last year I can tell you all that you can raise that tenfold because they will seriously have you absolutely mesmerised as live performers, vocal talent and how relatable their songs are to anyone, anywhere!  You can get a taste of what to expect from their debut EP here and the video for last year’s lead single “Wild West” from their debut EP below.

Fairground Saints: Just to put it quite bluntly for anyone that did not get to see Meg McAllister, Eli Edwards and Mason Van Valin when they came over for Country Music Week at the back end of 2018 (which you can read all about HERE) YOU REALLY ARE IN FOR A TREAT when you see them for the first time at C2C!  I was instantly blown away with their infectious sun kissed Californian blend of modern country with bluegrass influenced pop hooks as this sound is just so unique with slick melodies, such relevant songwriting and an incredible harmony sound.  They have a new EP on the horizon this year with “Somewhere Down the Line” and new release “California” being a great starting point as to why we really think these guys are pretty special.

RaeLynn: Another artist that I really wanted to see over here after her being one of highlights during CMA Fest last year and good old Father Christmas delivered when I asked for her to come over too.  Some people may be familiar with her as a former contestant on The Voice 7 years ago where she was part of Blake Shelton’s team but her southern charm, wit and charisma comes across so beautifully on stage that it is very hard not to fall in love with this little Texan.  With an array of songs that will be on repeat in your Spotify playlist for weeks and weeks after first hearing such as Tailgate (video below where you may spot guest appearances from C2C performers in previous years) and the beautiful God Made Girls which she co-wrote with 3  C2C alumni: Liz Rose, Lori McKenna and Nicolle Galyon.  If that is not enough RaeLynn will be back in the UK in May as the opening act for Maren Morris and her Girl: The World Tour.

Logan Mize: Back in August 2016 during the first Nashville Meets London festival in Canary Wharf many people got their first taste of this guy and how he really does absolutely bring it as a live performer.  Logan however had been a visitor to these shores playing shows prior to the NML show and we are really excited he is back again in March.  The Kansas native is currently on tour with Carly Pearce and Russell Dickerson prior to his appearance at C2C and 2019 looks set to continue getting bigger and bigger for him following on from last year and the success of the incredible single “Better Off Gone”

Sarah Darling: This incredibly talented lady is as close to an honorary Brit as you will find in Nashville and anyone that has seen her before will know we are absolutely thrilled to accept her as one.  Following on from her incredible 2017 “Dream Country” release and being no stranger to appearing at C2C in previous years, 2019 marks the incredible next release and the anticipation of her new project “Wonderland” which you can pre-order now prior to its release on March 1st.  Based on “Call Me” and the sneak peek we got of some other tracks we got back in October, her C2C appearance and UK tour to coincide with the release of this reflection of our great country is definitely something to be excited about.

The Adelaides: Despite not having yet released an EP or even a single, The Adelaides are one of the most in demand acts on the UK country scene.  Having already played a number of the mainstream UK festivals such as Cornbury and British Summer Time in Hyde Park in addition to some of the biggest country music events this side of the pond along with an array of opening slots including Charles Esten’s recent tour it is no surprise to see why Paris Georgia, Abi Phillips and Alicia Alba continue to grow in popularity with their terrific harmonies, catchy lyrics and really tight live performances.

Travis Denning: One of the best discoveries that we made during our 2018 trip to Nashville, when we caught the Music City Gives Back concert in Ascend Park during my first night in the city.  A great performer with some really relatable songs that will undoubtedly be a roaring success during the CMA Songwriters show taking place on the Thursday night before the festival and I can pretty much guarantee we all have a time in our lives when we were a “David Ashley Parker From Powder Springs”

There are plenty of other incredible musicians and songwriters playing across the weekend and the whole experience of C2C has such a community atmosphere so whoever you discover and go out of you way to see over the 3 days we can be pretty sure it will be as fantastic a weekend as it looks on the poster!  I have been a big fan of Abby Anderson’s debut EP “I’m Good” so personally will be great to catch her for the first time then although I didn’t get to see her, there were a lot of great things said about Lainey Wilson when she was over for Country Music Week last year who is part of the latest class of the CMT Next Women of Country along with Ingrid Andress who I am really excited to see for the first time if not just for how hilarious I think she is from seeing her socials and her pop songwriting background including being a writer on Charli XCX’s smash “Boys”.

If you haven’t got your tickets yet (as they are still available and you can find more information out HERE) then hopefully hearing some more of our ideas about what else is going on off the main stage will give you that extra bit of encouragement you may need to head down to North Greenwich!

Tickets for Official Aftershows on sale Friday 1 February at 10am

C2C 2019’s Official Aftershow Parties will see some of the hottest country talent take to the stage, when indigo at The O2 opens its doors from 10pm on Friday 8, Saturday 9 and Sunday 10 March.

Abby Anderson, named in CMT’s Next Women of Country Class of 2018 and ACM Award nominees Runaway June will perform on Friday, while Saturday night belongs to Michael Ray, whose debut single, Kiss You in the Morning, reached No. 1 on Country Airplay. RaeLynn closes the Aftershows on Sunday, having been recently revealed to join C2C alumni Maren Morris on tour, previously opening for Miranda Lambert, Rascal Flatts and Blake Shelton.

Each Aftershow will also feature the latest country sounds via Nashville’s DJ “Hish”, who has toured with some of the industries’ leading artists, as well as spinning at country music’s biggest festivals.

Glasgow’s Official Aftershows will be hosted at SWG3, with Michael Ray kicking things off on Friday. Saturday is headlined by Logan Mize, who’s previously opened for headliners Lady Antebellum, while established songwriters Ingrid Andress and Travis Denning will close Glasgow’s Aftershows on Sunday.

Also revealed is the much anticipated line up for the BBC Radio 2 Stage in London, which will see performances from Sam Palladio, Jimmie Allen, RaeLynn, James Barker Band, Travis Denning, Logan Mize and many more over the weekend.