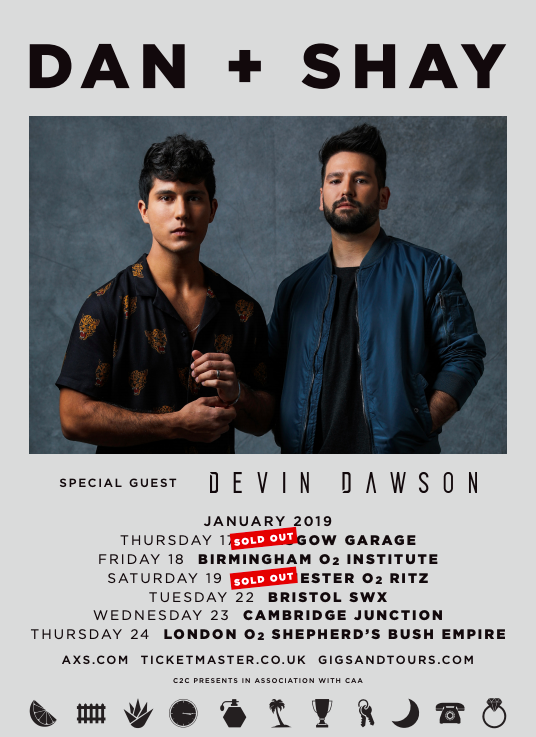 By Katie Ingram and Jamie Gardam

Dan + Shay have amassed millions of fans all-over the world and January 2019  was the UK’s turn to have the fan favourites back. During  and after each show there was a familiar sighting on social media, everyone was posting videos, photos and comments sharing the feeling that these were one of the loudest crowds heard at a UK country concert.

It seems like every fan was singing every word to every song!

They say you save the best for last and that is exactly why the London date of UK tours is becoming more frequently the final night of the run. Shepherds Bush Empire is always acoustically and aesthetically the best venue for any artist to play in the capital which with the loyal and dedicated country fan base over here always promises to be a fantastic evening. BUT this was totally different! I have never been to a gig here or anywhere else for that matter where the crowd were singing every single word to every single song giving everything that they have got and Dan & Shay reciprocated to give their absolute all back!

I must admit I don’t really know a massive amount of their songs that well (luckily everyone else did) but their general sound, vocal delivery and energy is something I was aware of from the 3 times I had seen them previously. I think “From the Ground Up” is an absolute masterpiece and one of the best country songs of the modern era and “19 You + Me” is such a great tune too which is a superb choice for an opening track to get the crowd going right from the start. Personally I find a lot of their songs sound quite similar and have the sort of the late nineties and early noughties Westlife vibe where without knowing the songs too well you are always expecting a key change imminently as you listen. Despite this I think as performers they are very entertaining, they are very engaging and there is just some sort of big likability factor that just draws you in.

The venue was built in 1903 and really is a venue made for Shay Mooney to deliver one of the finest voices in all of country music to every single part of it. As a duo there is a lot of charisma (along with some dancing you may be familiar seeing from relatives at a wedding) which engages with the crowd so perfectly and they really captivated the audience who were so much more committed than most sets of fans appear with how people really did sing at the top of their lungs for the entire show.

Tequila was a resounding crowd favourite to end the show which from the videos that had appeared online from the previous UK dates was always going to be a really passionate sing a long from both the duo and the crowd. However this really was the loudest and most fascinating sound I had ever heard at a gig, which culminated with them coming to finish the song in the middle of the floor and added to why I overheard many people talking about it as the best gig they had ever been to.

The Universal Synchronicity of Carvin Walls