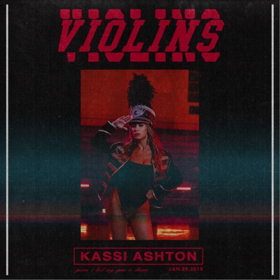 Kassi Ashton, a rising star in country music and a 2018 CMT Women Of Country artist. She has a whole lot of attitude and I can attest that she certainly doesn’t take herself too seriously! One thing she does take seriously is her music and for all the bravado her latest single ‘Violins’ was clearly an act of some seriously hard work!

I hear the violins you’re playin’, there’s no symphony inside my head

With a pop country feel and a sound reminiscent, for me, of Maren Morris with a little more twang this single is a catching track that will have your foot tapping along before you realise it. Her sassy swagger translates perfectly into this from the lyrics to the melody.

The song was written by Kassi Ashton, Natalie Hemby and Luke Dick, who were also responsible for Ashton’s debut hit Taxidermy, as well as Rosi Golan who did not take part in this write. With talents that have already proved them self to work well together this was already sounding great and I hadn’t even hit play!

When I first listened I heard the story of a romantic relationship song about an ex but actually the topic of the song could relate to any relationship where you get tired of that one person always being the hard-done-by-victim and finally you just can’t take it anymore. Something I can definitely relate to and I think most people have been in that situation. It’s a blunt wake up call to that person that enough is enough and, in the words of Jo Dee Messina, that your give a damn is busted!

I got my own marching band, guess I lost my give a damn

Kassi has found a niche in this genre that is incredibly popular at the moment and this most recent single has only continued to support her brand and show that she knows exactly where she wants to be as a artist.

She has a definite twang in her vocals but there is a distinct modern pop beat running throughout this track.

Ashton’s brand of country may not be to everyone’s taste but this song is catchy, it’s relatable and it’s a sure fire way to dig up a little bit of your own sass whilst singing along obnoxiously as it’s blasting out of your car with your windows rolled down!