Support from The Southern Companion & Angels With Dirty Faces

Half-term has a lot to answer for.  A long, lazy lunch full of Prosecco & Gin on the Thursday night resulted in a monster hangover on the Friday.  All I wanted to do was lounge around in my pj’s looking like a ‘less than hot’ mess, but I had a date with the one thing that could get me out of bed and looking ‘kind of’ presentable. Dexeter were playing in Leicester – an add on to their recent tour and too close to home to pass up.  The Firebug venue is a pub downstairs (with a great range of beverages) and a small venue upstairs, which is a regular feature on the stand-up Comedy Scene in Leicester along with a thriving live music scene. I usually just go to concerts with my gig buddy, Mary, but this time had brought along a couple of friends who were total Dexeter virgins (for want of a better description). Hell, it was a bank holiday and I felt like exposing my non-country friends to my world – what better introduction for them?

Opening for Dexeter were one of the newest bands on the UKCM scene ‘The Angels With Dirty Faces’.  Not an ounce of dirt in sight however, just strong lead vocals from Stuart Landon, sweet harmonies from their newly added female singers and some really good tunes with a rocky edge. The band was stripped back from the usual 7 to just 3 tonight for their support slot.  If this is how they sound with just 3, I cannot wait to hear the band with a full line up. Highlights for me were ‘Battered and Bruised’ which just about summed up how I felt that morning and a really great cover of Chris Stapleton’s ‘Whiskey and You’ – Stuart’s vocals really lend themselves well to a cover with a bluesy edge. They finished off by bringing on Darren from The Southern Companion and performed a brilliant cover of Ryan Adams ‘Firecracker’. I’m looking forward to seeing their career progress onto bigger things. Check out The Angel Sessions on YouTube –

The Southern Companion. Wow. I’ve been waiting a long time to see these live and my god they didn’t disappoint.

Last year was a huge one for the band of extremely talented and experienced past session musicians who have worked with artists as diverse as James Morrison, Rumer, Lulu and Tom Jones.  Countless festival appearances, C2C pop up artists, openers for Lulu’s tour and double BCMA award winners are just a few accolades they have under their belt.  Due to the size of the venue, we are treated to just 2 members of the band, the wonderful tinkler of the ivories, keyboard player Lee Maycock and Darren Hodgson on guitar and vocals. Again, my appetite has been wetted for the full band experience, looks like I may have to pull my finger out and travel further afield for this later on in the year. 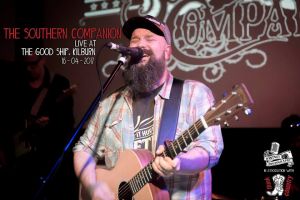 Opening with the mid-tempo lead single ‘Feels like Years’ from their second album 1000 Days of Rain, the gear shifts up a notch and Darren’s vocals soar effortlessly into the folksy ‘The Leaving Kind’. A real gem is the cover of Jason Isbell’s ‘Cover Me Up’ which enables Darren’s vocals to really open up and showcase the emotional rawness that just comes so naturally. Another superb cover of Del Amitri’s ‘Driving With The Brakes On’ earns a big cheer from the ever appreciative audience and just when I fancy something a bit more up-tempo, we’re treated to the very folksy ‘Crash’ with some superb keyboard accompaniment. Slowing it right down, there could only be one cover that could finish the set with the most perfect match to Darren’s voice as ‘Tennessee Whiskey’ by Chris Stapleton. Close your eyes and it could even be Chris up on that stage – don’t peep, you’ll spoil the illusion! A fantastic performance from a band who make it look easy.  I’ll be making the journey down south more often after this I think.

Onto the main event.  Dexeter have been flying over the past year. Bob Harris has really championed the band and enabled them to have the exposure that unsigned bands dream of, even describing them as a ‘country Fleetwood Mac’.  Woah, that’s a big claim to make and Bob knows what he’s talking about right? They have played sessions on both BBC Radio 2 and Bob’s ‘Under the Apple Tree’ sessions, recorded, written and played in Nashville, released a record on the Decca label (Nashville You and Me)…the list just goes on and on of past, current and soon to be realised achievements. 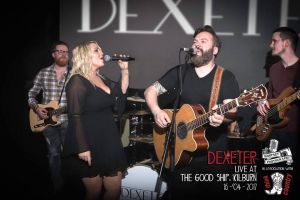 I’ve heard the album and EP on iTunes – the music is great – both catchy and feel-good, with intelligent lyrics and gutsy ballads, surely it doesn’t get any better than that? Wrong! It gets much, much better than I was expecting.

From the minute they open the set with ‘Weight of the World’, Deanne’s beautiful vocals are accompanied by the very prominent percussion of Tobi Ripley’s drums – who ever said that nobody cares about the drummer?! It’s clear already that Dexeter are on fire and with the addition of the percussion and guitars, they have transcended from their country, folky vibe to a country rock band with a one hell of a pumping base line (this sounds incredible on new single ‘I Hope It Hurts’). The crowd are feeling this too and the cheers are getting louder and more raucous.  Deanne has embraced the bad living, rock star cum pirate lifestyle, admitting she’s only brought rum onto the stage with her. Ok she really wants water and she gets some. Part rock star; part clean-living, wholesome, country-loving girl. For now, anyway.  It’s clear that the band, as a whole, are having a ball, their personalities are bouncing off each other as they flow from track to track.  Gareth & Dee are a superb front to the band, Did’s guitar work is fantastic, Dom’s base is awesome and Tobi just keeps laughing as he plays, clearly enjoying every minute. Its infectious, and I feeling myself grinning like the Cheshire Cat as I sing along, swept away by the moment and electric atmosphere.

The new single ‘I Hope It Hurts’ which has charted at No.1 in the iTunes Country Chart – congratulations guys! – sounds incredible live.  I hope the guy who inspired the song winces every time he hears it, cause it’s going to be around for a long time, and played A LOT. Bang! Straight into a brilliant cover of ‘Telescope’ from the Nashville Soundtrack. Gareth encourages everyone to ‘take a few steps forward’ and they don’t need to be asked twice. The room is hot, the drinks are flowing and it’s time to ‘Slow it Down’, one of my favourite Dexeter tracks as Deanne’s vocals are particularly beautiful on this one and I love the almost reggae-like vibe. A few ballads follow ‘Waiting for a Lifetime’ & another new song ‘Half a World Away’.

I don’t think anyone in the UKCM scene delivers a ballad quite like Dexeter, you can really lose yourself in the moment. Just as Deanne’s vocals finish the guitar kicks in and carries you away – their sound feels really complete and it’s obvious to me that this is their time.  It’s also obvious to everyone else going from the level of excitement and cheering in the room.  Got to love an obligatory ‘singalong’ competition during ‘Meet me There’ of men vs women, or should I say boys vs women – of course, I’m biased, we rocked – Hull, eat your heart out! 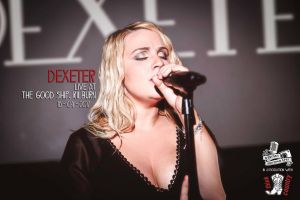 A special mention for the impressive cover of Lady Antebellum’s 747 both musically and vocally and it’s great to hear Gareth’s stand out vocals complimenting Deanne’s so well.  Drum sticks thrown out in style, the band exit the stage to leave Deanne and Gareth play truly magnificent, acoustic versions of Older and Rascal Flatt’s ‘What Hurts the Most’ to wrap their set up.

A couple in front of me (hello – you know who you are!) have seen Dexeter on numerous occasions and were emphatic in their declaration that this was by far, the best they had ever seen them perform.  My friends were really impressed, thinking that I was dragging them to a toe-tapping, country hoedown they were almost speechless at the sheer talent they had just witnessed and the main consensus was that ‘Dexeter rocked!’

I loved every minute of the set. I’ve been thinking long and hard to try and find something in the way of constructive criticism to mention so I don’t sound like I’m fangirling. Truthfully, I can’t find one thing to say which isn’t showering Dexeter in the praise they truly deserve.  Hmm, there is possibly one helpful thing I could mention.  Leaving the building I passed guitarist Did Coles on the stairs.  Telling him his guitaring was terrific, he paused, thanked me and added ‘I’m also single’.  There you go ladies…. 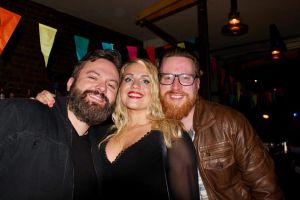