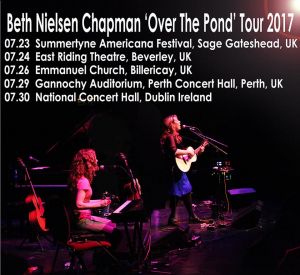 Who would have thought that a friendly chat in the queue to see Rick Astley at the Pinetum in Goudhurst would result in me sitting in a church in Billericay, Essex listening to Beth Nielsen Chapman.  My friend and I got talking to Paul and Paula Carr in the queue to see Rick. During our conversation it transpired that we had a mutual love of Americana and country music. Paul (Rev. Paul Carr) promotes live music and regularly has gigs in his church, the Emmanuel Church in Billericay.

On Wednesday evening myself and Jacquie attended the Beth Nielsen Chapman concert. Paul had been approached by Beth’s management as she wanted to perform an intimate gig following her performance at the Summertyne Americana Festival Gateshead and ahead of her performance at the Americana festival in Perth as she wanted to play some new songs from her album due for release next year. Beth is only playing 5 gigs on this mini tour so it’s quite a coup for Paul. The Emmanuel church is 25 years old this June. The seating inside gives you a feeling of being ‘in the round’.

The event was a real family affair with Paul’s daughter Annabel on the door, his son Ben and wife Paula at the merchandise table and family friends helping out throughout the evening.

We were a bit late, but thankfully only missed half of Ruth Trimble’s first song. Ruth was Beth’s support act, but as we found out during the evening Ruth plays and sings with Beth regularly. In fact she proved to be a very talented multi-instrumentalist playing the keyboard, bass guitar, acoustic guitar, tambourine and whistle (Irish flute?).

Ruth is from Northern Ireland and until 2009 was a pharmacist  and music was just a hobby. She won a scholarship to attend one of Beth Nielsen Chapman’s songwriting workshops in Nashville , and from there went on to record her debut album. Her skills as a talented musician have enabled her to tour with Kimmie Rhodes, Beth Nielsen Chapman and Olivia Newton John.

Ruth has a beautifully clear voice and is a very talented songwriter and musician and sung for about half an hour beginning with ‘Before the Rain followed by ‘Judah’ (written for her nephew). She dedicated her song “Pray for you’ to her father’s friend Dave who was in the audience. Her final song was ‘GoodBye’ which she sang with Beth.

There was a half an hour interval before Beth took to the stage which gave us a chance to have a quick chat with Paul and other familiar faces that we recognised from other gigs.

Beth Nielsen Chapman needs no introduction. She came on stage and started with a dedication to a gentleman who’s wife passed away recently. She sang ‘I find your love’ which is about loss and finding their lost ones love in everything, the sun, the sky, the rolling sea… catching their smile on someone’s face.

Her next song was ‘Enough for me’ accompanied by Ruth singing and playing guitar.

As many fans will know the late Terry Wogan and his producer Paul Waters were huge fans of Beth Nielsen Chapman and their favourite song was “All I have’ which Beth sang and dedicated to them. It’s a beautiful song about loving someone and needing nothing else but being in their arms.

‘Stone in my pocket’ is a moving song about grief which touched both Jacquie and I, describing grief so poignantly, sometimes the grief is a stone in your pocket, sometimes a grain of sand and sometimes a boulder. This is from the Liv album about grieving and healing released in 2016 with Amy Sky and Olivia Newton John.

During the gig there was a lot of laughter between Beth and Ruth especially during the tuning of Beth’s guitar, this added to the intimate atmosphere of the gig.

Beth sang a couple more new songs from her forthcoming album, one written with Graham Gouldman (10CC and The Yardbirds) called ‘Come to Mine’ the name of the song coming from Graham inviting Beth to ‘come to mine’ when she asked if they could write together. This was an upbeat happy song.

She sang some songs from her ‘Uncovered’ album; her recordings of songs she’d written that other singers had hits with’ Faith Hill’s This Kiss, Tanya Tucker’s ‘Strong enough to bend’ with Beth singing the mandolin part. For The Kiss Ruth joined in harmonising and playing the tambourine and at the end of the song both ladies burst into giggles.

Another new song was dedicated to Bob Harris’s son Miles who recently became engaged to his girlfriend Katherine ‘You’re still my valentine’. I really liked this song, it reminded me in parts of The Mamas and the Papas.

We really enjoyed the gig it is a lovely venue, so much that we both bought tickets to see Ricky Ross there in November.