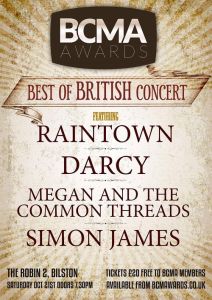 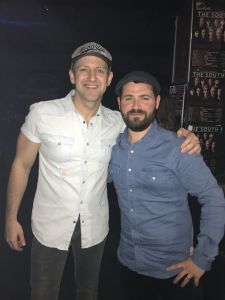 As a dedicated follower of most things country music since 2007, after C2C back in March this year I felt it was time that I try and discover a bit more of the Country music from the UK shores. So I took the decision to become member 474 of the BCMA and to attend the 7th Annual BCMA weekender which this year was to be held In Wolverhampton.

The weekend commenced within the town of Bilston, within a quirky venue called the Robin 2 which judging by the thousands of posters lining the walls this place a has seen many great artists over the years, and I also have to complement its flawless sound system which is big bonus for a small venue.

The evening was to be a showcase of the ‘Best of British’ country music and featured artists such as Megan O’ Neil (Ireland), Gary Quinn (Manchester), Simon James Band (Preston), Darcy (Manchester) and British Country regulars Raintown (Scotland), there was also an appearance from Sarah Darling all the way from Des Moines, Iowa.

Up first was an in the round session with Megan O’ Neil (of Megan and the Common Threads) on piano and Gary Quinn and Sarah Darling equipped with their acoustic guitars. If you have not seen an in the round session in the past, in short terms a few artists will sing a song acoustically and give a bit of background to how the song came to be.  Each of these artists gave a resounding and crowd-pleasing performance. The highlights for me from each artist were Megan’s ‘Why I Need You’ which displayed her vocal ability and musical talent with the soft piano, next up Gary Quinn’s ‘Body Language’ I had heard this song prior to the night and was a big fan, and live Gary did not disappoint I truly feel that he could tear it up with any of the big American Country Artists of today, and finally from Sarah ‘Halley’s Comet’ of which the room was so silent you could have heard a pin drop.

Next up it was time for the Simon James Band now with full band, this was my first experience of this group and unfortunately, I tried to do some research prior to event however clearly, I was looking in the wrong place for his music. However, I found the band to have an extremely good and upbeat vibe and had a good few songs which got my Toe’s tapping! I didn’t manage to catch any of the song names so don’t want to pretend I’m an expert, although I do feel that Simon James can go places in UK country and hopefully beyond they delivered a great set and are a band that I will be looking up and keeping a close eye on in the future.

Simon was followed by Darcy, now Darcy I felt represented the very Epitome of British Country music in his very sharp Tweed suit (If Tweed’s not country then what is it!), I learnt the 4-piece band (which includes Darcy on lead vocals) have only been around for a short period roughly a year, however when on stage their musicianship was as sharp as their namesake’s suit

I had managed to listen to a few Darcy songs prior and had enjoyed what I heard. His sound I felt was very Chris Young esque mainly due to the tone in his voice. The man himself was very good at working the crowd and appears to have a lot of natural charisma about him. The band has come very far in a short space of time by picking up two awards the next night at the awards (Best UK Country Song ‘Too Country for You’ & UK Video of he Year ‘Hooked’). To finish his set, he treated the crowd to a couple of popular covers featuring his spin on Drake White’s ‘Make me Look good again’ (which picked up International Song of the Year) and Brothers Osbourne ‘Ain’t my fault’ which brought the majority of the room to its feet.

Finally, was Raintown, which consists of couple Paul and Claire McArthur Brown now over the years I have seen this band a few times either at Nashville Meets London Festival or at C2C on one the various stages outside of the main arena, and each time they seem to get better and better. They entertained the crowd with to a set which included a cover of Little Big Towns ‘Girl Crush’ but also a selection of their original songs which included ‘Writing on the Wall’ which never fails to fill a floor. They ended the set with a new song ‘Run with the Night’ which received a great response from the audience so much so that once the song was finished the crowd continued to sing back to, much to the delight of Paul and Claire.

Overall the night I personally thought was a triumphant celebration of UK country music and for me personally it has made me see that there are acts on our small Island who are just as capable as those from the USA.

The BCMA awards host Baylen Leonard wrapped up the Awards on Sunday night with a quote which stated, ‘if they keep playing the music, he will keep playing the songs on the radio and together we can show the world the British country music is something to be reckoned with’

A sentiment to which I firmly agree.