Margo Price “ All American Made” Review 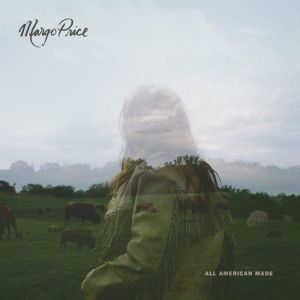 I’m sure every artist dreams of their debut album making such an impact, and receiving such incredible reviews, as Margo Prices’s “ Midwest Farmer’s Daughter” did last year.

But where would she go from there? We got to find out last week with the release of “ All American Made” , one of the most highly anticipated albums of the year for me and I’m sure for many reading this.
Whetting our appetite further Margo brought out her four track EP  “ Weakness” a few weeks back which indicated that her new music would take inspiration from a wider range of genres while still staying rooted in country/blues and also that the writing would tackle more far reaching subject matter than her essentially auto-biographical debut offering.

Heading back to Memphis to record for Third Man Records as before, this time round there was the luxury of more than just three days studio time and the sound is consequently less raw and more expansive, particularly in its instrumentation and backing vocals which even include a gospel choir.  Her husband Phil Ivey has once again had major input, co writing a large percentage of the twelve tracks and playing guitar and bass, and he and his wife have had a hand in the production once more. Naturally Margo’s stunning vocals are to the fore, her range and emotional outpourings a total joy. And her deep, observational lyrics are as sharp and witty as ever.

As mentioned earlier, this album isn’t in general as introspective as her first, but that doesn’t mean that her upbringing and experiences as a touring artist don’t provide a lot of inspiration, this time often peppered with social commentary.

In “ Wild Women”, an uptempo, drum driven track,  she sings about how it’s “ hard to be a mother, a singer and a wife…..but all the men run around and no-one bats an eye”. You may already be familiar with the lead single “

A Little Pain”, a soulful, funky track drawing on her struggle so far in the music business, and there are further laments on tracks such as  “ Nowhere Fast” and “ Loner” ( a real thought provoking track in waltz time…..” even the bums on the streets are just dreamers”). Possibly the most reflective track relating  to her career is the stunning “ Learning to Lose”, featuring Willie Nelson who duets on this beautifully arranged ballad. “ All the things I’ve had to do without are just a blessing but sometimes a blessing is a curse in disguise……is winning really learning to lose?” Willie sings, questioning whether it’s inevitable that sacrifices have to be made in order to succeed.

It’s no secret that Willie is a huge fan of Margo’s music, I love how his comments of “ Alright, that’s good!” have been left at the end of this recording. A classic in the making I’m sure.

Like Willie, Margo doesn’t shy away from condemnation of a political system that continues to perpetuate inequalities on many levels. Willie instigated the  Farm Aid concerts  in 1985 to raise funds to help the plight of American farmers struggling to cope with economic conditions ( it was during this period that Margo’s family lost their farm,  referred to on her first album, in “ Hands of Time” ) and this subject is expanded on in “ Heart of America”. “ Neil and Willie tried to help”, she writes, after describing the losing battle her parents fought despite their best efforts.

In “ Pay Gap” Margo  highlights gender inequality with regards to wages ( “ it’s been the same way since 1776” ) talking  of her dollar being “ ripped in half” in this mid tempo track which interestingly changes key signature between verse and chorus.

But it is the epic six minute title/closing track, “ All American Made” that really cuts to the political chase,
commenting on how US policies can be detrimental not only to the country’s working class but to the world as a whole. A slow, pensive number with actual political speeches playing in the background throughout this is a real no holds barred composition sung with the vitriol it deserves.

Yes there are lighter moments on the album ( “ Cocaine Cowboys a great tongue in cheek track about phoney country singers for example, and “ Weakness in which Margo’s explores her  chameleon-like  character ) but essentially this release is a hard hitter.

Midwest Farmers Daughter didn’t need country radio play to reach the ears of those who appreciate non-generic, from the heart writing and I’m sure this will be the case with “ All American Made”.
If you get the chance to catch Margo live, even better, she is already announced as playing C2C next year, and hopefully some more intimate UK shows will be scheduled soon.
Tracklisting
1.  “Don’t Say It”
2. “Weakness”
3. “A Little Pain”
4. “Learning to Lose” (featuring Willie Nelson)
5. “Pay Gap”
6. “Nowhere Fast”
7. “Cocaine Cowboys”
8. “Wild Women”
9. “Heart of American”
10. “Do Right By Me”
11. “Loner”
12. “All American Made”