Time flies!  It’s hard to believe, but this is my third interview with Adam Yarger.  You would think we had said all there was to say for a while, but think again.  Yarger’s new album, Scratched Up Vinyl, is set to release March 13, 2020 with pre-orders being taken right now, not to mention other big changes he wanted to talk about.  It was a solid interview, but in many ways, it really felt like a good chat with an old friend.

With so much to cover we opted to jump right into the new album first.  The title, Scratched Up Vinyl, comes from lyrics in one of the tracks, “What a Way to Go” (Bill DiLuigi, Adam Yarger), which was actually a single on his last EP, but don’t think you’ve heard it before, because you haven’t.  There are 10 songs on this new project, and six of them appeared on the last EP, but new producers, Patrick Murphy (Dolly Parton, Joe Diffie, Amy Grant) and Kent Wells (Dolly Parton, Paul Anka, Jimmie Van Zant) made some big changes to those older tracks.  For instance, where there was no steel guitar, now there is. Yarger told me there was a totally different feel and sound to those songs and being familiar with them, once I listened to the re-crafted versions, he was right, and they’re really good. You definitely won’t be buying the same songs over again.

Adam Yarger is a credited writer on every track.  I picked one of the new ones to talk about. “Crazy” is one he wrote by himself, so I chose it first.  It’s a slow, reflective ballad that Yarger explained was written when, “I was in a weird place. I wasn’t drinking heavily, but there was a lot going on.  Memories were popping up. I had so much to do, all the booking, just everything. I thought I was losing my mind. I thought I was literally going crazy.”  He said he rarely plays it at gigs because it’s such a dark song, but after hearing it myself, I think he probably should throw it in the mix more often at more intimate venues.  It’s one of his best.

There’s also a video that was shot for “Don’t Tell Me You Love Me” (Adam Yarger), a single that has already been released off Scratched Up Vinyl.  Yarger points out that he loves the re-released version of this tune much more than the one on his EP.  “They kept the pedal steel out on the EP and put it back in for the album and it sounds so much better.”  He said so far the video has been something of a “hidden gem”, but plans to get it promoted more as the album release date gets closer.

The next single set to drop will be “I Like Where It’s Going” (Bill DiLuigi, Adam Yarger).  With all of this and a tour schedule beginning to book up, Yarger hopes to have a busy summer, bringing this new music to fans all over the country.  He has already played dates in Alabama and Texas, and has dates in Virginia, Pennsylvania, South Carolina, Florida and Delaware on the schedule. Keep checking his website and socials for up-to-date tour information.

One place Adam Yarger has not been, but would love to play is the UK.  He said he’d love to play one of the music festivals there or in Australia, he just needs to figure out how to do that.  Yarger parted ways with his manager/booking agent recently and is now living the life of a true indie artist. While it can be overwhelming at times, so far, it seems to be working out for him.

Taking the reins and running a music career for yourself is no small undertaking, that’s for sure.  If you don’t have a certain level of responsibility and self-motivation, you won’t go very far. Yarger has already demonstrated that he has the ability to be a totally independent artist, but he feels he’s grown as a songwriter and a musician as well.  “As far as shows go, I feel I’ve learned to interact with the audiences so much better. I was in kind of a rut for a while, but now I think my writing is a lot stronger too.”

If anyone believes working as a country artist in Nashville affords one a life of luxury, please think again.  Unless you’re a signed artist with a whole team helping you out, there’s an endless list of tasks you do all by yourself.  Yarger pointed out the miles and miles he put on his Chevy Cruze last year just driving all over the country from gig to gig.  A fan was astounded by the fact that Yarger actually drove himself from venue to venue and hauled all of his own equipment. “I told that fan there was a formula to get all of my stuff into the car.  The seats fold down, the speakers go here, this goes there, that goes there, he couldn’t believe it. He said to me, ‘That’s crazy!’ I told him, ‘Yeah, it’s crazy. It’s borderline insane,’ back problems from being in the car all day, it’s all good.”

Yarger’s story is no different than countless other artists doing it on their own.  They book their own gigs, drive to them by themselves, stay wherever they can afford, often with friends if they have any nearby and haul all of their own gear in and out of the venue.  It’s a tough life, but they do it because it’s their calling and they don’t know what to do without it. They’re often holding down other jobs at the same time just to make ends meet. This was the not-so-glamorous side of the music business that Yarger wanted to talk about, and I think it was something that needed to be said on behalf of so many other artists doing the same thing.  They work hard and if there’s a tip jar sitting in front of them while they’re playing, throw something in it. It won’t make them rich. The most it will likely do is pay for their gas to get to the next town.

Of course, like all of the artists out their pounding pavement and driving their lives away, Adam Yarger hopes to continue in a forward motion and is always striving to take another step up the endless industry ladder.  He believes his songwriting is getting better and he has a few people he’d love to sit down and try to write with someday. These are writers he admires and feels have already penned songs that fit into his own wheelhouse.  He said he knows he could also learn so much from them. So, if Mitch Rossell, Jeremy Bussey, Rhett Akins, Jeffrey Steele or Chris Janson want to take a chance on a regular guy that just wants to write one song with one of the highly-respected songwriters in Nashville, hit up Adam Yarger.  I’m sure he’d clear his schedule for whenever you can fit him in.

Aside from working harder than he ever has and being really ready to release Scratched Up Vinyl, Yarger has another big event coming up in his life.  He’s getting married in September of 2020. That’s great news for him and his bride-to-be, Lauren.  That might be bad news for all the single ladies wondering what his “status” was. Yarger seems ready to take the big plunge though.  When he talks about being married he doesn’t seem nervous or worried about it. He seems genuinely happy and relaxed. They aren’t having a big, fancy wedding.  It will be a small, private, low-key ceremony. That makes him happiest of all. They are doing this their way.

To tie all of it up, if you’re already on the Adam Yarger fan wagon and you own his previous EP, you will find some of the same songs on his new album.  That’s not a problem because those same tracks on the new record have a much different sound due to being remixed and produced by a new team. Absolutely get the new album!  It is ready to pre-order on iTunes and Google Play right now.  The album will be available to the public on March 13, 2020.  All the details are on Yarger’s website (linked below).

Do make sure you keep up with all of Adam Yarger’s social media sites to stay on top of his most current tour schedule.  If he’ll be rolling into your area, grab some tickets and go have a fun night out with your friends. Make sure you tell him Think Country sent you and if you like him, make sure to let the venue know you’d love to have him back again. 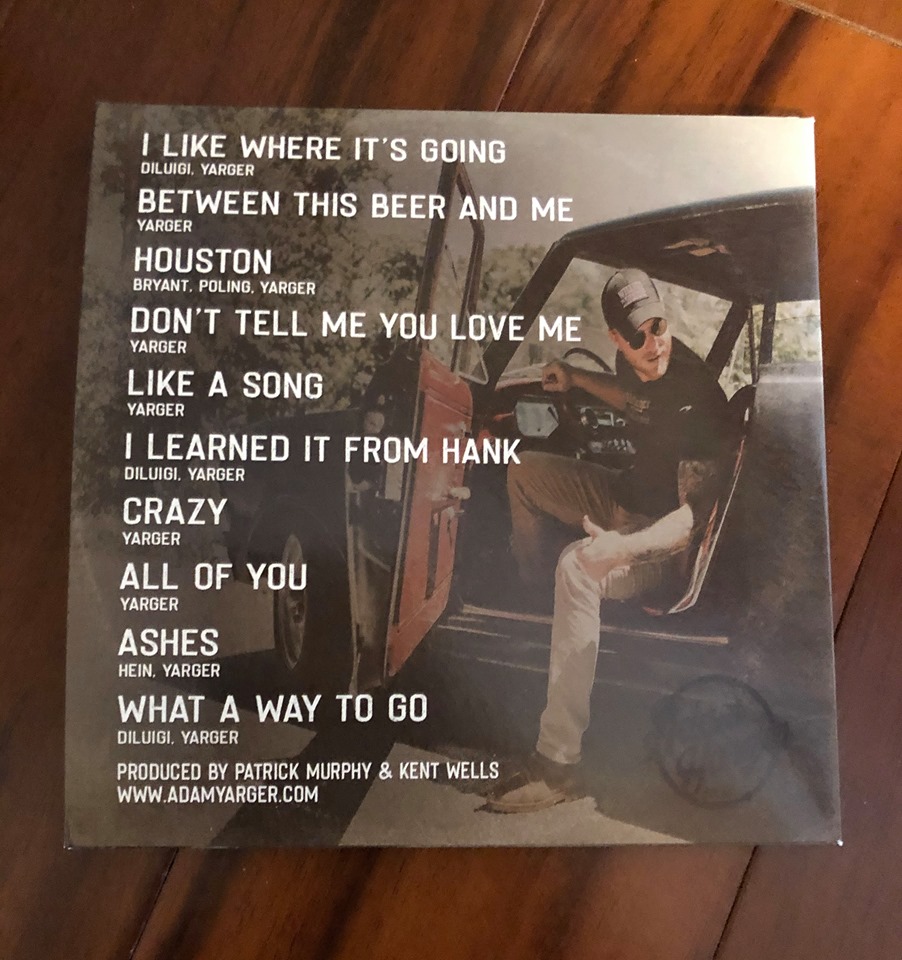