Well what a time I had the last two weeks. It seems like it always happens this way, I go on an amazing trip and pretty soon after I find myself attending an amazing concert. This was by far one of the best two weeks of my life.

The “Whirlwind” began with an extended weekend trip to Vegas to cover Route 91 Harvest Festival. I was excited not only to travel that far west within the US for the first time, not only to cover a huge country music festival but also to officially cover the event with my new boss, friend and one of my favorite Brits , Annette. Las Vegas, an experience in itself, wowed beyond imagination. The architecture, the grandeur and massive scale of all the hotels and the strip was beyond what I had ever experienced. I often found myself comparing the fantasy of it all to a larger scale Disney World.

After all the fun in exploring Sin City the festival began and what an amazing time it was. I have to say the dry heat and the concrete festival grounds was out of my wheelhouse being a Florida girl who’s used to humidity and a grass padded festival. The festival grounds in Vegas, located right across the street from the Luxor hotel, was a sight to see at night. While standing in a mass of country music loving people you could look over your shoulder and find the Vegas strip in the background. 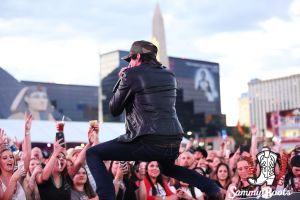 The weekend was filled with great music, a few interviews, and an altogether great time. The festival was filled with so many memories each night. Friday night’s memorable moments had to be Jana Kramer bringing out dance partner, Gleb Savchenko, on stage to execute a quick Foxtrot in the middle of her set, Chris Janson tearing up his harmonica and William Michael Morgan‘s set at the Next From Nashville stage which included one of my favorite covers of Mark Chesnutt‘s “A Little Too Late”. Night 1 wrapped with all american cowboy Toby Keith and his set of american pride tunes and fun drinking songs. 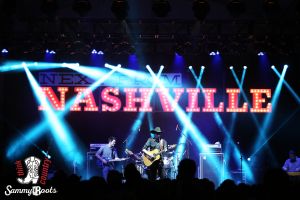 Before we knew it Saturday night geared up and we were off to the festival to catch the next round of performances. Saturday was topped off with moments like catching one of my favs, Courtney Cole, covering a little Shania Twain and rocking her girl power anthems, 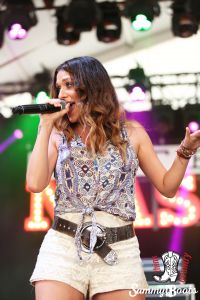 to waiting in the photo pit before Chris Young came on stage and looking up saying “hey that’s me” on the festival big screen when they shared the photo I posted with him before his set, to everyone singing along to “Lonely Eyes“ (a proud moment, knowing Johnny Bulford who wrote the tune and how cool it was to hear such a large crowd singing along to), and ended with Brad Paisley killing his set including singing “I’m Still A Guy” with Tyler Farr and bringing Lindsay Ell on stage so they could shred their guitars in tandem. 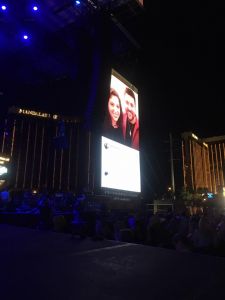 Sunday came with some resistance as the realization set in it would be the last night of the festival but that didn’t hold us back from having a great time. Sunday included my favorite duo Dan + Shay bringing Boyz II Men up on stage to serenade all the ladies with “I’ll Make Love To You” while handing out red roses, to Dustin Lynch making it one hell of a night (a future contender for Entertainer of the Year, I have no doubt) and the whole festival ending with Luke Bryan shaking his thang and entertaining the crowd with hit after hit and covers including some Marvin Gaye that he included tour mates Little Big Town on. 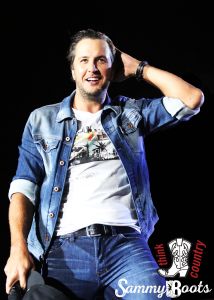 Talk about a whirlwind weekend and as soon as I flew home I got word we would be dealing with a real whirlwind, a hurricane in fact, that would be hitting the coast of Florida. Thursday was supposed to be the night I attended Garth Brooks World Tour with my friend Denise but instead myself and the rest of the state were penned into their houses with evacuations, county curfews, high winds and destruction due to Hurricane Matthew. Thankfully we got it very easy in Orlando and the concert was cancelled but rather postponed til Sunday afternoon. 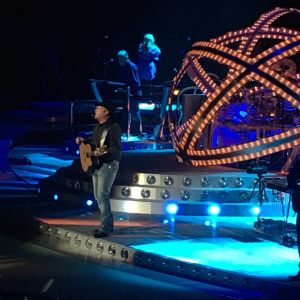 Yesterday was the day and what was supposed to be a Thursday night concert turned into a Sunday afternoon gig. Hold on, if you were thinking the audience would be subdued due to a weekend afternoon showtime, you’d be wrong. The crowd held nothing back and from intro to ending my face hurt from so much smiling. There is no doubt the man that holds so many #1 singles and has been named Entertainer of the Year in past years and is one of this year’s CMA EOTY nominees. He puts on a hell of a show, and if that weren’t enough on its own the fact that he is seasoned amongst all the other nominees makes it even more spectacular. Brooks’ leaves nothing out, singing hit after hit during the show. Trisha Yearwood came out halfway through singing their duet “Another’s Eyes” and continued her set with all the tunes of hers we know and love. As Brooks’ came back out to round off the show the crowd kept up the energy with screams and hollers after singing along to EVERY song he sang. I was most excited for Callin’ Baton Rouge and he sure delivered in performing it! I am no stranger to Brooks’ music but experiencing his level of talent in a live show was a first for me. What a memorable night, day.. whatever you want to call it if Garth Brooks hits your town you better have a ticket because you won’t want to miss it.

One of the fun moments of Route 91 was all of us photographers to the side waiting to go in to shoot Luke and us all singing along. Last night I got to be a part of a rambunctious crowd that couldn’t contain their excitement, like a child’s joy on christmas morning, with every song that was sung. I am so grateful I got to be a part of two incredible events, one as a photographer and another merely as a spectator. Either way I am a huge fan of the genre and that makes having this job even sweeter.