Brandy Clark with support from Ben Glover at The Glee Club, Birmingham 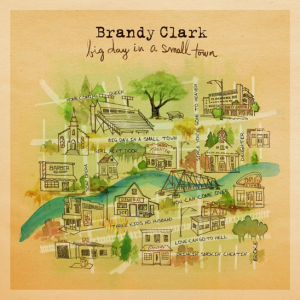 The Glee Club in Birmingham had the honour of hosting the first night of Brandy Clark’s current acoustic tour. It’s a great little venue, which reminded me of the intimacy of the Songwriters Series, the night before C2C kicks off at the O2 in London, but just about a third of the size. The atmosphere was clearly buzzing with the sheer anticipation of a crowd who already knew that tonight was going to be something really special.

I hadn’t heard of Ben Glover until he was named as Brandy’s support on this tour. A Northern Ireland turned Nashville resident, Ben has been carving out a name for himself as a singer songwriter, co-writing alongside UK favourite Gretchen Peters. Their song ‘Blackbirds’ is the title track to her most recent album and won International Song of the Year at the 2016 UK Americana Award for the co-write. Ben’s material is drawn from his experiences of home, his travels; musical roots and as Ben himself says ‘had to have the voice of someone who was figuring out their place in this world’. The result of these themes have been his acclaimed 2014 solo album ‘Atlantic’ and his most recent release ‘The Emigrant’. His writing is not for the faint hearted, subject matter is deep and serious with powerful, beguiling vocals which penetrate the very soul of the listener and carry you away on his journey of self-discovery. I really enjoyed the passion in Ben’s performance and highly recommend that you take some time to indulge in his music. You can find his music available to download on ITunes. 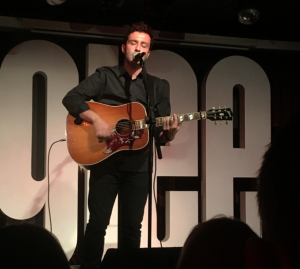 Brandy Clark. Just wow. In my opinion, one of the most original, sassy and talented singer/songwriters to have emerged onto the American country scene this decade. With the 2013 success of ‘12 Stories’ – her Grammy nominated debut album – and now celebrating universal acclaim with her new Warner Bros. Records album release ‘Big Day In a Small Town’, Brandy Clark has metamorphosed the female victim of old country into a confident, female protagonist who, even if she can’t fight back, can still have something sassy to say.

Accompanied by guitarist Miles Aubrey, a casual looking Brandy opens up her set with calm confidence on ‘Drinkin’, Smokin’, Cheatin’ and is met with rapturous applause by an audience that can’t contain themselves and just have to sing along as loud as they can. This is met with much amusement from both Brandy and Miles and we’re told to sing as loud as we want so they can hear our lovely accents, pitch is optional! This crowd certainly doesn’t need any encouragement, so with a licence to sing our hearts out, the tone is set for the next 75 minutes. It rushes by in a blur as we laugh, cry, chuckle, sob (or was that just me?) and sit, transfixed with admiration, by a woman who manages to evoke every single emotion possible in the human condition during the course of the evening.

‘Big Day In a Small Town’ sounds every bit as good stripped down acoustically as the romping, big production version on the album, mainly down to the strength and clarity of Brandy’s vocals. This is back to back with ‘Hold My Hand’ which sounds so much better live than on record, the tenderness in Brandy’s vocals a clear contrast to her sassy, punchy delivery before. Pausing to retune her guitar between songs she playfully jokes with her audience, stating ‘well, we are in a comedy club after all!’ Her versatility and down to earth personality just shines through at every opportunity. One of my favourite moments is ‘Daughter’, which she describes as her favourite revenge song she’s ever written, which co-incidentally doesn’t involve the usual ‘slashing of tyres’ or ‘blowing s**t up’ but involves a more lasting, sweeter revenge. It’s this dark comedic observation that Brandy has fine-tuned and turned to her advantage to make her song writing so compelling.

The punchlines just keep on coming along with her superb delivery and ability to keep the audience enraptured from start to finish. Her covers tonight include the hit she wrote for Miranda Lambert ‘Mama’s Broken Heart’ and ‘Better Dig Two’ recorded by The Band Perry. George Strait’s ‘The Chair’ was performed magnificently by Clark – I can’t think of too many artists that could dare to do justice to a song by such a classic, revered country Legend but of course, she pulls it off beautifully. Brandy shrugs off the chance of leaving the stage for an encore, stating that she might not make it in the heels she is wearing and opts to just keep on going. She’s a girl after my own heart. It made me wonder if she had her boots ready to dive into the moment she got off the stage and kicked her heels off! 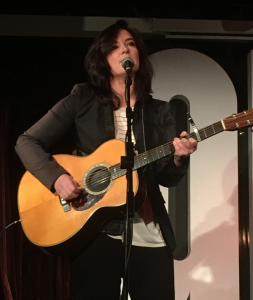 The songs just keep on coming and so do the laughs until ‘Since You’ve Gone to Heaven’ just stops me in my tracks. Her heart rending song, co-written with Shane McAnally about loss and its impact on the family, is drawn from the loss of her father in a logging accident. The poignancy of this song strikes a chord in the hearts of many in the audience and apart from Brandy’s gentle vocals and guitar there is not a sound to be heard. It’s a good job it was dark as there were a few tears flowing down my cheeks and I don’t think they were confined to the females in the crowd. To be able to move so many people with just a voice and an instrument never fails to render me speechless and tonight was no exception. Thank goodness for the final, uplifting song ‘Pray to Jesus’, a witty song which encompasses the struggles of the working class and brought me back down to earth with a bump!

In the true fashion that I’ve come to expect of the down to earth and respectful attitude the American country artists have towards their fans, Brandy waited at the end of the gig until every person in the queue had bought their merchandise, had a signing opportunity and a crafty photograph (her manager had said no photos but Brandy thought otherwise!). I think I floated to the front of the queue, garbled a few incomprehensible sentences as all the things I wanted to say seemed to disappear as soon as those knowing eyes met mine and then floated out the door, down the stairs and into the cold night air. That’s a Big Night in Birmingham Town that I’m going to remember for a very long time. 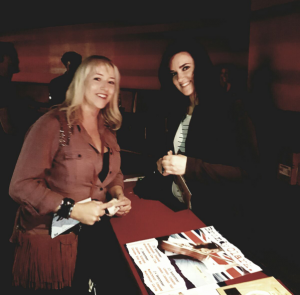 Drinkin’, Smokin’, Cheatin’
Stripes
Big Day in a Small Town
Hold My Hand
Daughter
You Can Come Over
Love Can Go To Hell
Girl Next Door
3 Kids, No Husband
Better Dig Two
Mama’s Broken Heart
The Chair
Get High
An unrecorded treat for us!
Hung Over
Since You’ve Gone to Heaven
Pray to Jesus

A 2 Week Whirlwind That Blew Me Away