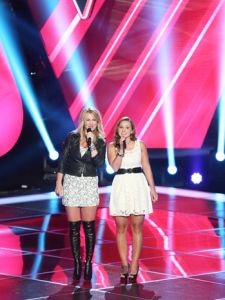 First, a little background on 2 STEEL GIRLS.  They are Allison and Krystal Steel, a mother/daughter duo originally from Ohio,  who first gained national attention on Season 3 of NBC’s “The Voice”.  Since then, they have been working as independent artists in Nashville, and drawing an impressive following of fans along the way.  In this piece, I’ll share what’s been going on with them lately and what’s coming up in the near future.

Allison (mom) grew up singing in church and always loved it.  Krystal, well, not so much, even though Allison says she always KNEW her daughter was born to sing.   Krystal had dreams of “being the next Michael Jordan”, but at 5’2”, her hoop dreams were cut short (pun definitely intended).  High school also intervened when other elective classes filled up and Krystal ended up taking chorus.  Describing herself as too shy to sing, chorus helped her beat that problem and she found that not only was she good at it, she actually enjoyed it.  It was at this point that she also began to sing in church with Allison.

So how do a mother and daughter that sing in church decide to audition for “The Voice”?  They don’t.  Instead, “The Voice” comes to them.  Yes.  It seems Allison and Krystal had a Facebook page with about 100 fans at the time and decided they needed a plan to reach more people and get those numbers up, so they started making videos of themselves singing and posting them to their page.  Someone from “The Voice” noticed, contacted them and the rest is history.  As for the show itself, the girls can’t say enough good things about it.  The entire experience was good, from beginning to end.  They still had to go through an audition process, which was both exciting and made them nervous, but everyone on the show “couldn’t have been nicer”.  The show worked with them on everything from wardrobe (“Should we match? Should we not match?”) to helping them identify themselves as a country act.  At the time, they hadn’t even really decided what genre they were going to be.  Asked if they would recommend the experience to other artists trying to make their big break, they answered, “Yes, absolutely!”

We talked a little about their last EP, “Red, White & Blue Girls”, and how the title suggests they might be a little patriotic.  They were quick to let me know that indeed, they are very patriotic, but none of the songs on the EP were written by them.  They were also quite candid and admitted that in the past they have been given advice to do things different ways that don’t necessarily feel right to them.  Case in point, this particular EP.   As independent artists, they ended up feeling anything but when all was said and done.  The songs were thought to be “more radio friendly”, but they didn’t represent who 2 Steel Girls are.  Things were starting to become less fun and they were losing their identity.  They knew this had to change if they were to continue.

If you’ve been following 2 Steel Girls for a while, you already know they’re fun and that comes out in their music.  It seems 2017 is about to bring a resurgence of the old Allison and Krystal with new music and nobody is happier about it than they are.  They’ve run the gamut.  They’ve taken all the advice they’ve been given.  They’ve tried to be “more Carrie Underwood”.  They’ve been told to “not be so goofy”.  Well, they’ve given these and other words of wisdom a shot and not only did they not work for them, they didn’t feel right, so now, they’re going to go for something new.  They’re going to be more “genuine to ourselves”.  They just signed with a booking agent six weeks ago and will be lining up dates to support their new music soon.

In addition to the upcoming tour dates to be announced, 2 Steel Girls were busy during this year’s CMA Fest in Nashville.  Most notably, they had their very first full band show on the stage outside Hard Rock Café.  Asked how that went, both Allison and Krystal said it went great and the fact that their band is now set with permanent players made it better yet.  Now everyone is always on the same page.  Band members include Andy Flores on keys, Barney Johnston on bass, Steve Frey, guitar, Aaron Steel, electric guitar and Todd Steel on drums.  One of the highlights of our conversation was when they talked about their band.  Their excitement level amped up because they really appreciate these guys and all the work they put in.  They couldn’t say that enough.

CMA Fest also afforded them the opportunity to reconnect with old fans and meet new ones.  They were quick to point out that aside from playing music, fan interaction is most important.  They played at The Valentine and also met fans and signed autographs at the Nashville Universe stage.  Fans allow musicians to do what they do and 2 Steels Girls understand this wholeheartedly.  “It takes a village”, says Allison.

It does take a village. That’s so true.  Social media has made it possible to stretch that village and make it as big as the entire planet, and 2 Steel Girls has embraced that technology.  Using tools like Facebook Live, Allison and Krystal have invited fans to join them in everyday adventures and it seems to work well.  Sometimes they’re doing exciting things that country artists do and other times, they’re just driving around and chatting, but in either case, it’s a glimpse into their world and fans and friends alike are eating it up.  They keep it G-rated so anybody can tune in and comment as it’s all going on.  People from all over the world tune in and interact and according to Allison and Krystal, it’s quite successful.  These ladies aren’t afraid to be themselves and that’s what I believe makes them likable.  Country music fans almost demand their artists to be real.  They don’t want artists who are so far above them on the food chain that they can’t relate to them.  Yes, they expect them to be talented, but the minute they find out their heads are too big, they’ll drop you and move on to the next guy or gal with a great voice.  That’s something you can bet your last dollar on.  I would highly recommend everyone follow 2 Steel Girls on all forms of social media and jump on this bandwagon so you can become a part of their journey, both musically and socially.  They’re a whole lot of fun.  The girls admit they haven’t had much time to partake in any of these online shenanigans recently because they’re busy creating new music, which of course is the priority, but they hope to be back at it soon.

Finally, I had to ask about their relationship with Realtree Girl.  This is a tremendous line of products and I was wondering how they got involved with them.  Once again, 2 Steel Girls did not approach them to ask for a sponsorship, just as they didn’t go roadtripping to cold audition for “The Voice”.  It was a matter of someone from Realtree seeing a picture of Allison and Krystal fishing on Twitter.  After that, Realtree ended up sending them a pair of tennis shoes and the next thing you know, they’re working with Realtree Girl.  I guess sponsorships can happen, if you go out and fish, and you know how to sing, and you have a band…

These two talented ladies and their band may be coming your way soon.  Do yourselves a favor.  Buy a ticket.  Go see them play.  Go meet them.  Follow them on social media.  You’re going to love them.  You’re going to want to hang out with them.  They’re as personable as they are talented, and they really do appreciate their fans.  I won’t say they’re reinventing themselves for their next record, because I don’t think that’s accurate.  I think they’re going back to who they really are.  I’ll repeat Allison’s words because I love them.  “We want to more genuine to ourselves.”  Look out 2017, 2 Steel Girls are coming your way!