THE AFTER-VIEW WITH 2 STEEL GIRLS 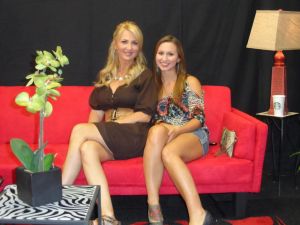 After the “real” interview, we had a little bit of fun!

Allison: “Crazy pair of boots that go over the thigh.”

Artist you would love to meet?

Krystal: “Shampoo! Seriously shampoo because by the end of the day it looks like I dipped my head in Crisco, so I love shampoo!”

Allison: “Cheap hair dye! I spend eight dollars on two boxes. The girl in the store told me she’s going to school for hair and she would do it for me, but I told her I do my own because I’m cheap!”

Something different between Ohio and Nashville? (Ohio is their home state and Nashville is where they live now)

Krystal: “I won’t say people are nicer here, but in Ohio, there’s no BS. They tell you like it is.”

Krystal: “Holes! You know, like sinkholes, I’m getting freaked out just thinking about them.” (Allison added that Krystal is also afraid of heights)

Krystal: “Half time at the Super Bowl”

Krystal: “An extra toothbrush. I don’t have any toothpaste in there though.”

Allison: “Dream On” by Aerosmith

Krystal: (There was a funny story attached to this, but I’ll make it brief) “Hardwood floor because the dog peed on it and it left a spot.”

Allison: My whole house because what used to be the country is now filled up with houses and isn’t really the country anymore.”

Krystal: “I’m saying the Opry because I’ve never been to The Ryman. I know, terrible for a country artist to say that. I did go to the Grand Ole Opry to see Blake Shelton.” (Blake was their mentor on “The Voice”)