The 22nd Annual Key West Songwriters Festival is now in the books!  Having never been to one of these tropical extravaganzas with the almost perfect combination of sun, beaches, adult beverages and non-stop music, I could say it was overwhelming, but somehow, it was not.  Key West has a way of pulling this potential sensory overload down to a level that’s manageable, if control is in your game plan, that is.  If not, you could very easily go way off the deep end in very short order.

I stuck with control, because I wanted to document it with some semblance of clarity for thinkcountrymusic.com and because I was really that into everything I was hearing.  It was all too good to miss!  So, I got home armed with notes and video and ready to write my life away and then I was just stuck.  How does one write about something which equates to four days in Walt Disney World, chasing toddlers from land to land with no real plan?  This was, essentially, what we did.  Only our theme park was a musical one with our “lands” being venues and our “toddlers” being marvelously talented songwriters.

After giving it a day of thought, I figured out that the best way was to break it up.  Write one piece on the experience as a whole, then write a second piece on the songwriters we saw.  That way, I can get my opinion on things like the lay of the land, the venues, the weather, the diversions, parking and all of that extra stuff out of the way first.  I can then focus directly on the songwriters and what I thought of them and their music (which is really the best part and what I love to write about most).  So, let me quickly rip through this little blog-like nonsense and then you can decide if maybe this festival is for you, but remember, these opinions are entirely my own.  Every hotel, every restaurant, every everything is seen through my eyes in one small segment in time, so take it with a grain of salt.

First things first.  If you’re going to go, do your research and book your trip, say…. YESTERDAY.  We were invited to go on this trip by friends about three weeks prior to the festival, so our pickings were slim to say the very least.  Hotels and airfares were hard to find (at least at prices less than a king’s ransom) and we ended up flying into Fort Lauderdale (FLL), renting a car and driving to Key West.  If you’ve ever done this drive, you know it isn’t exactly just down the street, it’s a good three and a half hours in light traffic.  If time is of the essence, and driving long distances isn’t your idea of fun, find a flight that flies directly into Key West (EYW).  In any event, if you want to go, make your decision, and start booking things.

We ended up at the Doubletree Key West which is NOT in Old Town, where most of the events are held.  Another lesson learned, as parking in Old Town can be a nightmare.  Next year, we’re changing that up.  The Doubletree was great, but as they say, location, location, location, and because of our late booking date, it’s really all we had to choose from anyway.  You take what you can get.  Now we know why it was still available, even though there wasn’t much left in that hotel either.  You have to be quick people.

Key West is beachy, as one might imagine. I mean, it’s really beachy. If you aren’t a seafood person, and I’m not, you won’t die of starvation or anything, but it might be best to check out menus prior to entering a place.  A lot of the menus are dominated by seafood, with some chicken tenders or a burger thrown in to appease people like me.  If you don’t like chicken tenders or burgers, there’s always key lime pie.  That’s everywhere too.  I managed to survive on that a time or two.  If you can’t make it on key lime pie, there’s always beer.  Throw a lime in it and it’s a health food.  Almost a week in an island paradise and they’ve got me thinking like them. 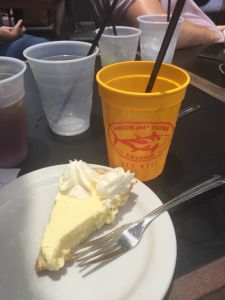 Transportation isn’t always necessary if you have two working legs.  Many of the venues are close enough that you can walk from event to event, and there are cabs and golf carts for hire as well, but let me tell you about those scooters!  Scooters, scooters everywhere!  Think they’re dorky?  You won’t think so after about a day.  Everybody rides them!  Really!  It’s a THING in Key West.  Ditch a real car and drive a scooter.  I saw a mailman driving one.  You can rent one while you’re there, and you probably won’t be sorry.  I kind of wish we had.  Parking them would have been easier than parking a car and those little buggers buzz around everything!

Speaking of things that are EVERYWHERE and buzz around everything, how about roosters and chickens?  Yes, the “gypsy chickens” of Key West are everywhere!  They roam into open air cafes, the roosters will wake you up before dawn, so no need to set an alarm, and like a never- ending snooze alarm, they’ll continue to crow, not every nine minutes, but probably every nine seconds until you simply can’t stand it and finally get out of bed.  An oddity, perhaps, but don’t harm them, or you’re going to be looking down the long arm of the law.  These birds are protected.

The festival itself, while very busy the first few days, seemed to lighten up considerably on the final day.  Fine by us, as it made getting a table at the previously crazy Smokin’ Tuna Saloon fairly easy early on Sunday afternoon.  That said, by about mid-afternoon, the venue filled up, so maybe everyone was simply sleeping off a Saturday night of debauchery, attending Sunday brunch with mom (it was Mother’s Day) or we just got incredibly lucky, but whatever the reason, if you really want to see a certain artist, arrive early!

Other diversions we were able to sneak in included The Ernest Hemingway House (loads of six-toed cats, one of which we had and which we miss dearly, so that was a hit for us), The Truman Little White House grounds and a few shops.  There are lots of these things around and all it takes is a little research or a simple walk to find them.

Bottom line is our little group decided this was such a fun and successful trip, it needs to be a yearly trip.  I recommend it to music lovers that have been to songwriter rounds before and know how incredible they are, people that have never attended a songwriter round in their life because this would be like winning the lottery if you lived your life from paycheck to paycheck or songwriters that are just looking to further their craft and learn from the best by seeing so many of the best in a relaxed atmosphere.