It was very appropriate, and no coincidence I’m sure, that Carly Pearce’s self titled, sophomore album on Big Machine Label was released on Valentines Day. Recently married to fellow country star Michael Ray, the album sees Carly  singing about finding love on many of the tracks, but also reflecting on the sadder times of the past few years ……which as she says “ have been full of the highest highs and the lowest lows “ and have seen her grow as a person throughout the making of the album. She worked once again with producer Busbee (who also co-wrote one of the tracks) and the album ended up being his final body of work before his sudden and premature passing last September.

I was fortunate to be able to ask Carly a few questions on album release day on behalf of the Think Country team, concentrating of course on her new music, and I hope you enjoy what she had to tell me! 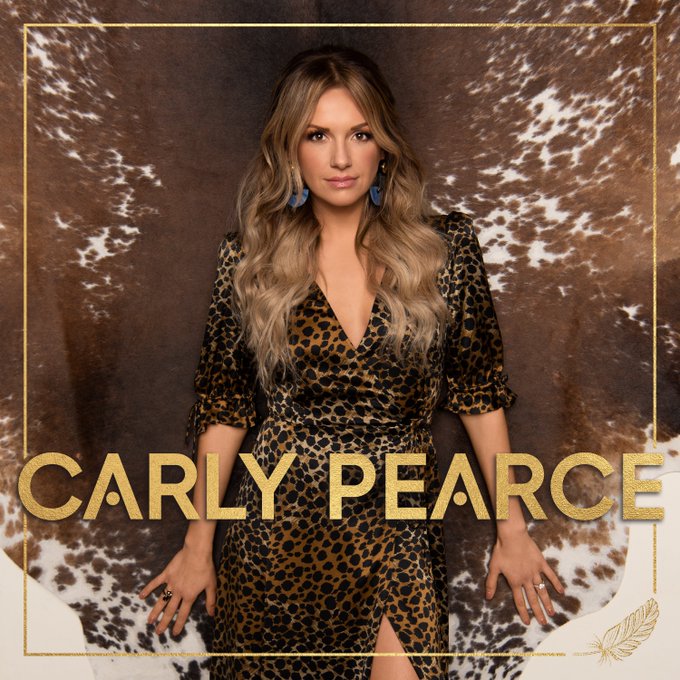 Hi how are you?

I’m fine thanks!  Happy Valentines Day and album release day! Are there any tracks that you are particularly excited for us to hear for the first time today?

I think all of them!

Well I’m certainly loving them all!

It must be a bittersweet day for you too, though, without your friend and producer Busbee here to celebrate with you?

I know he’s very proud and looking down today.

What did working with him over the years teach you?

Oh gosh, he taught me a lot! He taught me to be ME and to push myself as a writer, as a singer, as an artist.

Sophomore albums can be a notoriously daunting undertaking for artists. Did you feel any pressure going into this one, especially with your debut being so well received?

Of course, I’d be lying to you if I said I wasn’t nervous. But I feel so confident in this record being a great follow up to my first that now all those nerves have gone.

I love the mix of classic country and contemporary instrumentation throughout the tracks. When you write a song, or hear an outside cut you want to record, do you immediately have an idea of how you’d like it to eventually sound?

I think it just depends on the song and if I can really feel it. I want to be a country artist so it has to have a little bit of that in there, a certain phrasing, lyrical content . So yeah I think it’s about all of those things.

There’s several of your co-writes on the album that really see you wearing your heart on your sleeve and exposing your vulnerability  (  such as “ I Hope You’re Happy Now” of course, but also “Halfway Home” in particular). Do you find songwriting therapeutic, a way to move on out of difficult situations?

Yeah! Sometimes I feel I express myself best through a song.

But there’s also plenty of tracks here to reflect the fun side of you and the happiness you’ve found with your husband. They must be really fun to perform live?

Yeah I love all the upbeat stuff! Love is a huge part of this record and this chapter.

And your incredible vocals are a stand out feature throughout, you deliver the outside cuts with as much conviction as your self penned songs. I assume as well as being great songs what you look for in those written by others is a connection, something that resonates with you?

I think I HAVE to as an artist, whether I wrote the song or not, have some connection to it and some sort of reason for cutting it . So yes, I definitely look at the scenarios and think “could I put myself in this song like I wrote it”.

I think my favourite outside cut on the album is “ Dashboard Jesus” (Victoria Banks, Sara Haze, Emily Shackleton) a song I gather you heard several years ago and have always looked at recording. What drew you to that particular one?

I think that it really told my story of going and trying to chase my dreams. That will never change and that’s why that song stood the test of time with me. And it just reminded me of ’90’s country.

Absolutely! I know you are a big Shania fan in particular, performing “ Man, I Feel Like A Woman” as one of the songs that influenced and inspired you at this week’s “ All For The Hall” benefit show in Nashville. There’s actually a couple of tracks on your album I could envisage Shania singing, I hope that’s something you’re happy to hear!

And you’ve got two duets on the track listing too, obviously the fantastic single with Lee Brice which is doing amazingly well and you must be so happy with the reception that’s receiving…..

Yes, I’m really, really excited . I obviously hoped that it would do what it’s doing but you can’t expect something to happen quite like this and I’m really happy.

…….and then of course there’s the other duet “ Finish My Sentences” with your husband! I’m sure you’re looking forwards to performing that together tonight at your show in St Louis?

Do you have a favourite country duet?

Great one, and another husband and wife duet too!

Looking at you tour schedule, you’ve got a busy time ahead out on the road Stateside, but are there any plans to return to see us in the UK? We loved having you at C2C last year!

There are no plans as of now, but we definitely will be back in the future, probably next year.

Oh that’s great to hear, we’ll look forwards to welcoming you and will keep out eyes and ears open for any announcements! Many thanks for your time on what I know is a crazy busy day for you.

Ahead of new album ‘Saturn Return’ due February 28th,...

TC in Conversation with Kelsey Waldon