We are becoming more and more fortunate with the quantity and frequency that US country artists now come and visit Europe to play shows but there is something really cool about getting to witness these journey’s form the start. Kelsey Waldon is an artist that we have heard a lot of people talk about as someone that the UK was well and truly ready for and off the back of her latest album ‘White Noise / White Lines’ which was released at the back end of 2019, she was finally able to make the trip over for the first time. Playing a string of shows in the UK and European mainland through this February opening up for Sean McConnell, Ian Noe and John Prine where she would have her first encounter of country fans on this side of the Atlantic and before her own headline show at The Slaughtered Lamb in London, we were lucky to speak to Kelsey and find out more about the Kentucky native.

Kelsey on her first impressions of the UK from her first ever trip to London:

Man, I mean we’ve loved it! I’ve only been here since Sunday, haven’t got to do too much but did a few touristy things yesterday as I had a day off. The day before was all press stuff but we played a show Monday night at Omeara with Ian Noe and it was awesome! Just the fans, I mean everyone was so receptive and very respectful, I really feel they embraced me which meant the most, stood out the most for me.

and her initial experience encountering the UK country fans:

I had, all my friends and all my peers, everyone that had been over here before me have all said that. They were like you are gonna love it and they’re gonna love you! I’ve just heard awesome things about the country music fans too, I mean super great things. Based on the first show that we did and based on how excited people seem to be, I mean we definitely have some great fan bases back home too, don’t get me wrong. Just for the amount of respect for the song and songwriting. I’m over here touring with just myself and my guitar where people seem to not care one bit, it’s not really about flash or anything, people just have been really receptive.

then why this was the first time she had visited the UK and why the time was now right:

Oh My Gosh! Well I would absolutely have been over here earlier if it was up to me. I don’t think people realise how hard it is for an American artist to get over here. I’m sure it’s as hard for an artist from London to get to America – You know, we didn’t have a record out over here for a long time and before I was signed to Oh Boy Records, I was sending records out myself! Like on vinyl, I mean I was sending them out in my basement and a lot of them were coming over here but it still never really made sense, with the money and the budget you know. Then when we had the record come out finally over here on Thirty Tigers, it was like it’s time! It was way overdue so I’m excited to be here now and making it count. It’s obviously been supporting slots this first time and the venues seem great for the shows with Sean (McConnell) then meeting back up with Ian in Amsterdam, doing some shows with John Prine and doing some shows in Sweden of my own. We’re in Europe for around 3 weeks all together but leave London tomorrow, we’ve had fun getting to rest here, still not really on a great sleeping schedule but.

Kelsey on the awful beast that is jet-lag:

I dunno yet, it’s strange. I thought we’d fixed it the first night when we stayed up like 2 days straight and then we went to bed and were like OK we’re on schedule now but we weren’t. I flew straight in from Nashville on the direct but on the way back it won’t be that easy for us, we’re basically gonna connect 4 different planes but getting here it was very easy. 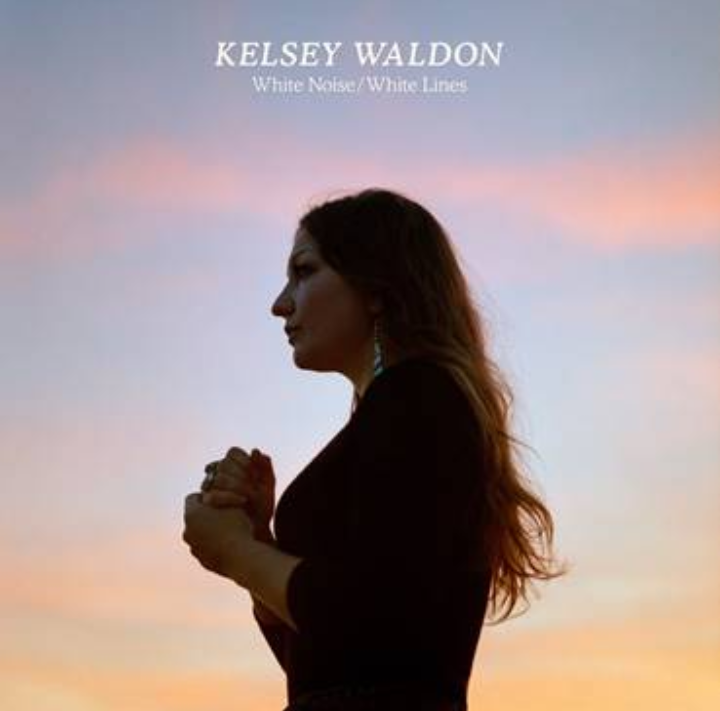 Kelsey on releasing ‘White Noise, White Lines’ as a full record and the importance of being able to tell a story with a full album:

I appreciate that, I don’t know if we really meant for it to be that way. I’ve always been a quality over quantity kind of person and I think albums are still important, they’re still important to me and I still think there are still fans in the scene out there that do care about albums. Honestly the single world is maybe a bigger thing in the pop country type setting which is fine but like I prefer to do it that way and just put up that quality. Have it be organic as well! My favourite records were all albums! God, I went to visit Abbey Road yesterday and literally thinking how that record, I know like back to front! White Noise was the same kind of goal.

Kelsey on her own musical influences:

Gosh I mean growing up clearly country, bluegrass and you know all types of music. Even from the beginning Hank Williams Sr, Loretta, Tammy Wynette, Dolly Parton who was a huge influence of mine when I was younger. Patty Loveless was one of my first concerts ever, I’m a huge Ralph Stanley fan and all my bluegrass heroes. I also love soul music, I love Mavis Staples, The Staple Singers and classic rock was always on. I went through a big Led Zeppelin phase in High School, Pink Floyd and Dylan! I would say Bob Dylan was my first songwriter, like big songwriter but there’s so many. Tom T. Hall, Townes Van Zandt, John Prine who was one of my first ever heroes and now I’m signed to his label which is pretty insane.

Kelsey on how she built the relationship with John Prine which lead to signing with Oh Boy Records:

Well, I guess the story goes he had heard my last record which was called ‘Iv’e Got a Way’ I guess him and his wife did and actually the whole Oh Boy team heard that and I got introduced to Fiona, his lovely wife who has also been my mentor. Then to make a long story, short I finally ended up playing some shows with John on my own and I guess that’s kind of when we bonded. He started kinda asking me about the record and was really interested then as they say the rest is history and it kinda kept growing.

and how far along White Noise / White Lines was before the label came on board:

Kelsey on country being her musical calling:

I think I love country music more than my Dad does! My Grandparents were the big country music fans. I think a lot of people have stereotypes about rural people and that type of place. Sure, maybe Kentucky isn’t known for their punk scene or anything like that but it definitely exists. I think there’s a lot more than meets the eye and I’ve been all the way around the States at this point and clearly it seems like our stories connect with other peoples stories no matter where we’re from. At the end of the day everybody’s the same everywhere. I think I’ve had a lot of influences but at the end of the day I’m a country person, I’m a rural person and I think that comes out in my music, it’s not really choice. You can’t really switch a light on and off to be like not country. So whatever else gets mixed in with that and influences me it’s all in that pot!

on growing up in Kentucky and her home town – Monkey’s Eyebrow:

It really is called Monkey’s Eyebrow! There’s my Dad’s hunting lodge and that’s pretty much it, a couple people still live there now. It’s kind of like a little nook in the county. It’s really not that unusual a name if you’re from Kentucky, there’s a town called Possum Trot less than an hour away, we had a Shady Grove in our county. Kentucky has all kinds like that, there’s the Big Bone Lick so all kinds of crazy names. I just kind of embrace the wild and wonderful culture where we’re from. Honestly it’s pretty unique, I’m the one and only. 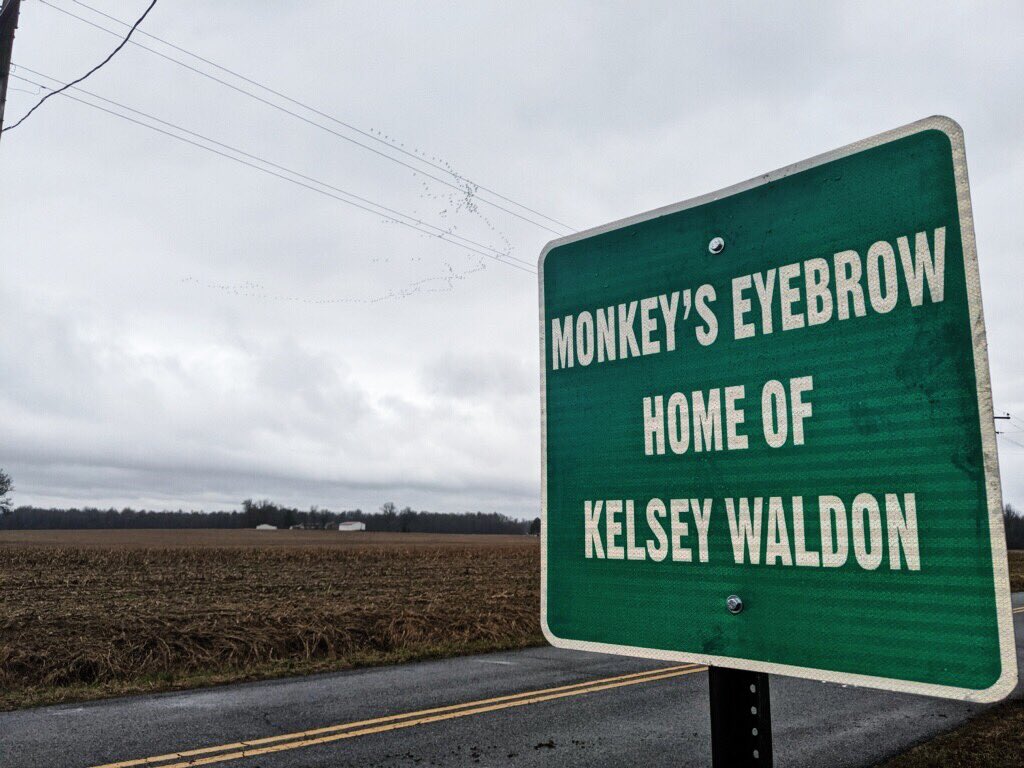 and the new addition to the local town sign:

That just happened really recently and it really meant a lot to me. Dad took a picture and they say ‘Proud as a Peach’ but I think he’s prouder than that! It feels good, there’s so much talent out of our state and always has been so it’s an honour for me, I hope people can be encouraged by it and it can be a positive thing.

Then finally on any future plans to return to Europe:

We’ll be back! That’s the plan, this is definitely a strategic plan everybody! We’re coming back!

Kelsey’s recent album’White Noise / White Lines’ is available now on Oh Boy Records via Thirty Tigers which you can find HERE, whilst you can keep up to date with her and be the first to hear about any future trips across the pond like she promised on her Website Facebook Twitter Instagram & YouTube.