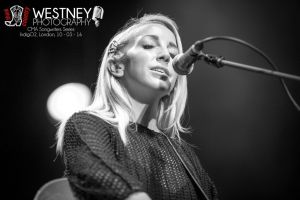 For those who are unfamiliar with Ashley Monroe, she is a Country Singer-Songwriter, better known as one third of The Pistol Annies (Hippie Annie), alongside best friend Miranda Lambert (Lone Star Annie) and Angaleena Presley (Holler Annie). Ashley has been in the music industry, though slightly under the radar for a while, mostly as a songwriter, penning songs for Miranda Lambert, amongst other artists, as well as having songs featured on ABC’s Nashville. Ashley, surprisingly not that successful in the beginning of her solo career, released her debut album Satisfied in 2009 – whilst almost impossible to obtain a physical copy, the album is available to download from iTunes among other outlets.

Since then, and alongside the release of The Pistol Annies’ second album Annie Up , Ashley released her second and more well known album Like A Rose. This featured nine equally fantastic songs, including a slightly remastered version of Used, which was originally on her Satisfied album. Used is a favourite of mine which I have never seen her perform, despite seeing Ashley a few times. In 2015 Ashley released her third solo album The Blade, featuring songs such as the uptempo On To Something Good, and the critically acclaimed song The Blade which is actually the only song on the album that Ashley didn’t have a hand in writing but is still, in my opinion, one of the best songs in Country music today. Ashley also featured on Blake Sheltons hit Lonely Tonight in 2014 which features on his Bring Back The Sunshine album.

10th March 2016 saw the beginning of the latest Country 2 Country Festival at the 02 Arena in London. Once the line up was revealed and that Ashley Monroe was going to appear, it was almost too good to be true and then……it WAS too good to be true. Ticket holders for the three day festival only (11th-13th March) were disappointed to learn that Ashley would only be performing in London on the Yamaha Stage which is a B stage at the back of Arena where artists play around two songs in between the main stage acts. Alas, not long after the festival announcements, Ashley was confirmed to be part of the CMA Songwriters’ Series on the Thursday before the main festival, which is one of the best nights of all the festive treats. However, as good as it was, myself and many others were still craving a full show from Ashley.

A long time had passed – in fact we were already into 2016 – before C2C announced a string of ‘C2C Introduces’ shows. Amongst these, I was delighted to see, was a solo show from Ashley Monroe at Bush Hall in London on Tuesday 15th March 2016, just days after the C2C Festival. I then knew we were ‘On To Something Good’. I would usually be concerned when a show is taking place so soon after a festival, but country fans are very loyal and will always find the energy to attend a Country artist’s concert, no matter how exhausted they are.

Bush Hall, in Shepherd’s Bush, London is a very small venue with a capacity of around 350. Slightly hidden, and just a little further up from Shepherd’s Bush Market, Bush Hall is a stunning building built in 1904 and was originally a dance hall – and even used as a soup kitchen in World War 2. Solely used now as a music venue, to see an artist in this setting is truly unforgettable.

Arriving just minutes before the doors opened, I managed to secure a place at the front of the stage, as it was all standing, and watched as the venue gradually started to fill. A sold-out show, the audience were well behaved and respected their neighbours and everyone was comfortably placed.

The stage, whilst very small, almost like a pop up stage – it just showed how intimate this performance was going to be.

After a support act from UK Country act Lucy May, Ashley took to the stage. Dressed in an all black figure-hugging trouser-and-top set, Ashley was escorted on to the stage and joined by two band members, one a fiddle player and the other on the upright bass.

Beginning her set with I Buried Your Love Alive, I was immediately taken in and started to get lost in her performance. After her second song If The Devil Don’t Want Me, Ashley emotionally addressed the crowd with gratitude stating that no one had ever sung that song back to her before, whereas the whole of Bush Hall did. To me, and I am sure many others, it strikes me as odd not to be familiar with an artist’s entire tracklist on an album, but Ashley is not the first US country artist to tell us she is overwhelmed with the UK fans knowing every word to every album track, as the US crowds don’t. Flashbacks to my interview with Little Big Town last year where Kimberley Schlapman told me we, the UK, are special fans because we know the words to every song and not just the singles. Brad Paisley made a similar statement in an Interview I’ve read too. Hopefully, this will encourage these artists to come back – and for those who haven’t visited before, to come over.

Although I enjoy singing along to Ashley’s songs during her show, I could also sit there in silence and just listen to her with no other sound. Her voice is such a rarity in today’s music industry, as it’s possibly one of very few traditional Country sounding voices around. Ashley not only mesmerised us with her voice, but she also entertained the crowd with her quirky personality and quick wit. A songwriter as well as a singer, before introducing the next song, she told us of her first writing session with Guy Clark and Jon Randall, about how nervous she was and had no idea what to write about. Prompting her to tell them a bit about her life, they penned the title track to Like A Rose, based on what she told them.

Weed Instead Of Roses was the next song on the set list. A slightly raunchy, yet comical song, Ashley informed us how Vince Gill, who produced the album, refused to do so unless this song was put on the album. Despite thinking it was a risky move, Ashley indeed put it on the album and rightly so, as it’s a great song. As a bigger fan of the album Like A Rose, I would have liked to have heard more of the album, but was more than happy with her performing more songs from her current album The Blade.

The rest of the set included Bombshell and the uptempo single On To Something Good – a song she described as not like her usual material, but didn’t exactly fly in America as well as she thought it would. Later in the evening we were treated with a new song that she had taken a while to write, as the melody had been stuck in her head for months with no lyrics till one day they came to her. It became a song called Orphan and Bush Hall was the first place she had ever played it live. With it being a new song, no one knew the words, so it was beautiful to hear just her voice with total silence from the audience. A track with such a beautiful melody and equally beautiful lyrics, I am certain this song will be cut on her next album.

Stating the next song was her “last song” – but not her last, as she said we all know she will come back on for an encore – she sang Winning Streak, a more traditional sounding track from The Blade album, with a fast paced sound.

Going back to the songwriter’s session on Thursday, during her performance of Heart Like Mine, Ashley brought out, much to everyone’s surprise, the one and only Miranda Lambert to sing with her so, of course, we were all hopeful she would do the same for this show. Having seen videos of Miranda joining Ashley on stage in the US a lot lately in venues such as Nashville’s 3rd and Lindsey, I was 100 per cent convinced this would be the case, especially as I had seen the set list had Heart Like Mine as part of the encore. After just minutes, if that, Ashley returned to the stage to talk about the next song, the title track to the album The Blade, and how her very best friend sung harmonies on the chorus. She then said, ’So I am going to bring her out to sing harmonies’, or something along those lines – her exact words I don’t remember as it was all a blur. I was too busy cheering for we all knew what this meant. Then very casually, dressed in a stunning black leather skirt and flattering red lace top, CMA Female Vocalist of the Year Miranda Lambert joined Ashley on stage.

Miranda stood on the stage and had a quick giggle with Ashley and looked very emotional and taken in by the overwhelming support for her best friend. Despite the people on the front row attempting to get Miranda’s attention, she politely ignored them to ensure the moment was all about Ashley. Miranda told us that she’d watched the entire show from the back of the venue. Amazing how nobody noticed that the biggest female artist in Country Music today was just casually standing at the back but hey! – that just shows how much of a good performer Ashley is, to have her entire audience fixated. What was so wonderful about Ashley and Miranda on stage together was that Miranda just seemed like a totally normal person. It was just like seeing two friends get up and sing, which in reality was exactly that.

Singing The Blade and Heart like mine, Miranda then departed from the stage, leaving Ashley to finish the night solo. Miranda stood at the side filming the moment as a proud friend would do. The only issue was that some people on the front row spent the entire duration of the last song staring at Miranda, rather than concentrating on Ashley singing Hickory Wind. I found that rather disrespectful but it’s probably a risk Ashley is aware of – in my opinion Miranda really doesn’t upstage Ashley in any way. The fact they performed together was just a bonus, a damn good one but a bonus – and possibly a moment we shall never experience again. I for one will certainly never forget it.

Overall the night was everything I expected and more. With Angaleena Presley performing there just months before and Miranda joining Ashley on stage, Bush Hall can now boast it has hosted all three members of The Pistol Annies, albeit not together – but maybe one day?? We can dream right?