Taken from the website Your Life In A Song 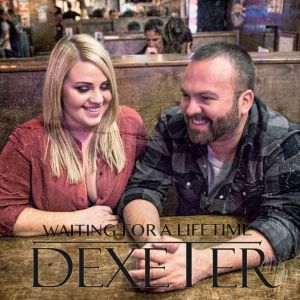 Dexeter’s reputation in the UK country music industry has grown and grown continuously in recent years. Since their appearance at the very first Country to Country back in 2014, Dexeter have cemented themselves as regulars at the festival, and they have opened for a number of successful UK acts including The Shires, Ward Thomas and Raintown. Not to mention the support they have received from BBC Radio 2’s Bob Harris, appearing on his ‘Under The Apple Tree’ stage at this year’s C2C.

Their debut album ‘4000 Miles To Nashville’ received impressive reviews, and now they are set to release a brand new 4-track EP titled ‘Waiting For A Lifetime’ which is yet another step up in quality.

The EP begins with ‘Not Giving Up’, a gorgeous depiction of the struggles of a relationship, whilst still maintaining a determination and persistence to keep the love alive. Deeanne’s pure, angelic voice hits you right from the very first lyric, proving once again why they have attracted such incredible crowds at C2C year after year. She is technically one of the very best vocalists the UK country scene has to offer. This is a beauty, with such a wonderful use of an electric guitar and slick production throughout. This will definitely become a fan favourite.

‘Try’ is totally at the other end of the scale. An attention-grabbing infusion of pop and country that will come as a bit of a surprise to fans. Certainly an experimental track and drastically different to anything the band have produced to date. That’s not to say it won’t be embraced; it takes a couple of listens to really get into the song, but it’s incredibly catchy and one that would sound awesome live. To their credit, it showcases their ability to push the boundaries and they’re certainly not playing it safe here. An interesting one.

The title track ‘Waiting For A Lifetime’ is a return to Dexeter’s comfort zone. A simple yet beautiful ballad allowing Deeanne to shine once again. The introduction of drums and electric guitar mid-way through the track is sublime; you really get a sense of the track building and building. It’s one of those sit-up-and-listen tracks, it’ll grab you and you’ll find yourself becoming wrapped up in its warmth.The song was written in Nashville, as part of an exciting collaboration with Grammy nominee Michael Logen (Kelly Clarkson, Will Hoge, ABC’s Nashville soundtrack). This is Dexeter at their very best – stunning.

‘Weight Of The World’ is the final track, a more up-tempo tune about what it really means to love somebody. A delightfully written song with a very uplifting vibe; probably the most mainstream-orientated of the four on offer here and one that will certainly appeal to the masses. It’s a real foot-tapper, another one that lends itself beautifully to the live show, especially with the killer electric guitar. Almost early Lady Antebellum-ish material.

Once again, Dexeter have produced a very pleasant collection of songs that will be played in our car for a while, that’s for sure! The quality of their music continues to improve with each release, and this is an EP which will not only please loyal fans but will also attract a lot of new faces. They are currently on tour with UK country duo Holloway Road, make sure you go and check them out – details at dexeterband.co.uk