We are absolutely delighted to be bringing you the exclusive global premiere for the brand new lyric video for “Think About It” the latest track from James Robert Webb which has been rapidly climbing and gaining significant reach charting highly on both the Billboard Indicator Chart and the Music Row Country Breakout chart which has notched up well in excess of 150,000 streams on Spotify alone.

The upbeat track engraved with a positive uplifting message was written by Webb along with Alex Dooley and Shelby Lee Lowe which is the thirteenth and final track from Webb’s recently released self-titled album (Listen to James Robert Webb HERE) that was produced by the renowned producer Buddy Cannon who will be widely known for his work with the likes of Kenny Chesney, Reba McEntire and Wille Nelson to name but a few.

Webb is not your typical country artist as the Oklahoma native who still resides on the outskirts of Tulsa splits his time between music and his other calling in life as he is a practising physician with a focus on keeping people out of hospital looking at  helping people with the likes of spinal fractures. His calling to medicine is just something he has been able to put aside whilst he described his relationship with music as:

Always been a part of my life, it’s just “Fighting for total control”

He talked about his musical upbringing where country had always been a part of his genre spectrum whilst his main instrument has always been piano which he learned from a young age that lead through being in bands and playing jazz through being in the all-star state band. Yet his real musical draw was rock through his teenage years particularly artists that looked to do things differently and innovative. He talked of early memories listening to his mothers 8-tracks of Elton John’s “Goodbye Yellow Brick Road” and Fleetwood Mac’s “Rumours then had been fascinated by the work of Queen, Jimi and Jimi Hendrix along with British progressive rock band Yes and in particular Sting and The Police. Then the draw to country specifically comes from the appeal of songs being well written and telling the stories of real life and of regular people we can relate to:

I’ve always liked music that’s interesting and when it comes to country, all the people in the 90’s: Garth Brooks, Brooks & Dunn and Alan Jackson they took that almost more rock and roll than country. Really old time rock and roll infused with country. Even artists that have taken that sound on like Kenny Chesney and Keith Urban, it’s like the last bastion of rock and roll I would say in the most part. I like things that sound organic, if you take what country is now compared with the artists from the 70’s like Eagles, Tom Petty or John Mellencamp there’s a lot of that sound. One of the things that always interested me was things that are different and thrown together like a mashup. Take Led Zeppelin, Jimmy Page comparing his acoustic stuff to the electric sounds.

His work began very much melody driven from working on piano as had initially not sang when he was playing in bands, he worked a lot on instrumentals until he began writing more extensively but this combined with this wonderful voice that was almost like a caged beast waiting to be set free and his love for classic rock has created a sound best heard in his recently released eponymous record that is an infectious blend of southern melodic Texas country impacted with classic rock riffs and sounds, yet is brought right up to date whilst still fitting these traditional values.

I like to respect the genre but also mix it up, then also to do things differently to others because I don’t wanna be chasing trends. My goal with this and Buddy is, I may not be a traditional hardcore country artist but working with him to surround me in that Nashville sound that smoothed everything out.

This ability of trying to keep your lyrics traditional, but adding modern, contemporary twists to make them fresh and current brings about this magic new sub-genre that people refer to as “Neo Tradtional” which in a very simplistic definition is paying respect to classic sounds but bringing it up to date

Being from Tulsa, OK in that Tulsa/Texas region which was always referred to as red dirt, which today means something a bit different but to me it’s about going back to the great songwriters form this area with the shared influences and things. People like Kris Kristofferson, even going back to Bob Wills in Texas swing. In Tulsa we’ve got Tulsa Sound people like Leon Russell. There’s maybe a bit of church music, gospel and blues. I like something that sounds new but also sound traditional country.

This theory of innovation and creativity was a key theme that we talked about and particularly the “Need to find who you are as an artist that no one else can imitate which has to come from a really authentic place.” Given the state of country music right now there is a danger of feeling a need to chase the machine where there is a tendency particularly with radio and the major labels to stick to the same proven formula in terms of sound which jumps somewhere between country and pop. Country as a genre does not need to be constrained, it is not as set as something like polka or KPOP that needs to follow similar mechanics where it is to chase and then try and go one up. However where there is so much music out in country you want to avoid being lost in the white noise even if at times there is that draw to replicating something proven yet you don’t want to go too modern with it where you could end up missing the key values. 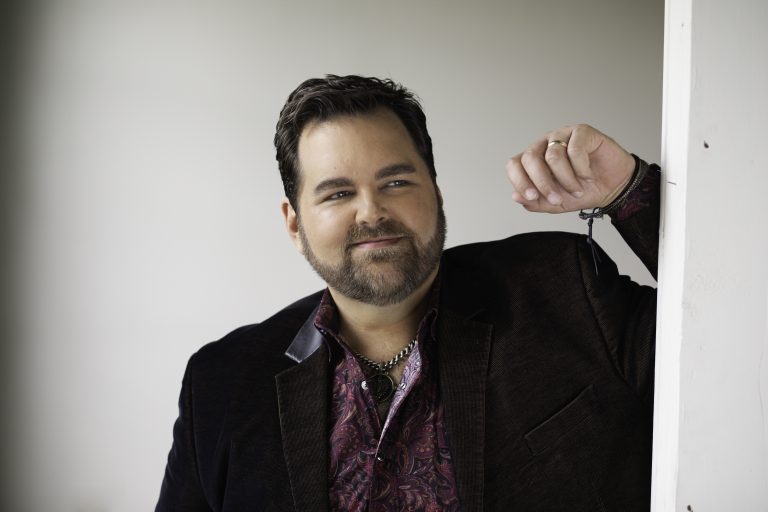 This new self titled record arrived 3 years since Webb’s last release “Honky Tonk Revival” and he feels it is a step forward in his writing and also the first time he had completely found his voice so was almost a coming out album as an artist so hence the decision to have it be self titled when not a debut release. The album has been in the basket for some time, with “Think About It” being the fourth single to come from the record but the release timing was all about ensuring he had the right team in place and the position as a new artist that the stream of new music is key to people discovering you. With this there is to plan to give more expose to some other tracks off the record potentially looking to rework one of them or explore an alternate version or even changing one up to be a duet so there is plenty of life in this sublime blend of vocal smoothness and neo traditionalism in every sense.

The other change for Webb with this record was stepping away from the production element where this was handled by Buddy Cannon which he was aware that there were high standards expected on things he was working on. James said how one of his assistants described Cannon as the “Song Nazi” in that he had to be working on a great song!

We had a mutual friend that worked at Capitol Records who was working on my promotion at Billboard and he passed stuff over to Buddy who liked what he heard I guess. We met, I played him some songs which he liked, then he found songs for me and that’s kind of how it went. It’s been a great collaboration so far and I’m looking forward to doing some more work. We’re already talking about getting back in the studio again and looking for songs!

Given the uncertain times in the world right now, it is difficult to fully plan a schedule going forward but he is still optimistic of making some things happen on the road in July and trying to focus where there has been areas of strong airplay and support so we are thrilled to be able to set the ball rolling further by premiering the lyric video for “Think About It” and keep the positive momentum going as we move towards the prospect of him being able to play some live shows once more.