Alabama native (but long time Nashville resident) Walker Hayes released boom., his long-awaited, full-length studio album, on Friday 8th December, via Monument/Sony Music. Hayes, who wrote or co-wrote every song on the 10-track album, many with ambiguous song titles, chose an album title that may well be his only instance where the title might give away the meaning. “’boom!’ It’s my favourite word. It’s the first thing I say after I play a song from the album for anyone. So, it’s what we had to call the album. I’m just so excited to share another part of the story. BOOM!

boom. is produced by Grammy-Award winning producer Shane McAnally. “You Broke Up With Me,” the project’s debut single, has already accrued over 25 million streams. 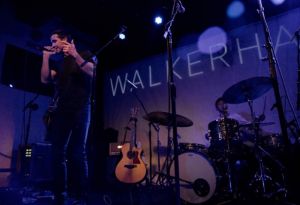 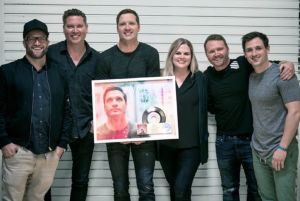 TC: ​Entertainment Tonight called you ‘insanely talented’ recently; how does it feel to be finally getting success with your music?

WH:​Hahaha…I don’t know about “insanely talented” but it does feel great to be able to provide for my family making music. It’s a little bit unreal to think that after all these years, I have an album on shelves in stores, a song racing up the charts, and a fan base rapidly growing larger. I really am just grateful. I’ve watched friends way more talented than me come to Nashville and leave before the world recognized their gifts. I’m one of the lucky ones. So, so, so grateful for this opportunity. I don’t want to let anyone down. I just want to make my family and my team proud. They have sacrificed so much to bring me here. I don’t want to take a second of this for granted.

TC:​Your father must be so proud after he pushed you into taking the first step?

WH:​Yes, he is so proud. As a matter of fact, just the other day he called me in tears saying how much he loved the song, “Craig.” He said, “it’s one of the best things you’ve ever written.” Then he said, “Hey, here comes someone…I gotta go play it for ’em…call you back later.” That pretty much sums him up. Too busy bragging about me to talk to me!

TC:​It must be fantastic to work with Nashville royalty Shane McAnally. What is he like to work with? Did he try to change your path at all?

WH:​If any other producer had called me and said they wanted to make a record I would have said, “no thanks.” After all I had been through before Shane called, I was pretty jaded. I thought best case scenario, another artist might cut one of my songs and launch a writing career. When Shane said he wanted to produce a project on me, I felt a hope I hadn’t in a long time. Working with Shane has spoiled me. He takes such care of the projects he invests in. I’ve never worked with anyone that felt so obligated to make it right. That’s what it’s all about for him. It’s not about flexing his writing/producing muscles in order to further his brand. It’s about the music. He is still in awe of the power of music. He listens like a kid. Making this record with him has been an honour and an educational experience. Shane and his team changed my path. They encouraged me to write the 8 tracks. Those were game changers for me personally. I had never written without aiming. I had never experienced that much artistic freedom. Writing 8 songs NOT for radio, NOT for a label, just for the listeners and myself. It was an unbelievable exercise that I think all artists should practice. Those two projects, “Good Shit” and “Break The Internet” brought out my best. “boom.” never would have happened without those. As a writer, I improved more in the course of those two 8 tracks than I had in all my previous 12 years in Nashville. Shane continues to shape my path because I trust him. I listen to him even when what he has to say pisses me off. I’m lucky that Shane and his team have my back. I’m fortunate to have found a home that understands me so well and knows how to coach me to my full potential. I’m so grateful.

TC:​It has just been announced that you are playing a Bluebird session and an after-party show at Country to Country in March. Everyone will be clambering for tickets. Have you been to the UK before?

WH:​I have never been to the UK! I know…sad. But there is a first time for everything. I’m really looking forward to it.

WH:​I know nothing about the UK. Not gonna lie. I just want to soak it all up. Word on the street is that the fans in the UK are the greatest. I’ll be the judge…! From what I hear, they are music lovers. That is something we have in common. Every artist is grateful to play for anyone with a deep appreciation for music. I can NOT wait to share mine with the UK.

TC:​How do you manage the touring with your large family?

WH:​We are grateful for the tours. That is how I provide for them. My family loves my job and wouldn’t want me to do anything else. They are extremely proud of everything we are accomplishing and love coming out on the road when they can. So far it has been pretty smooth balancing family and work. I’m sure there will be challenges as this thing grows but I want to always make them my number one priority. All the touring is for them. I miss them…but they have shoes.

TC:​How was touring with Thomas Rhett?

WH:​Touring with Thomas was a blessing and a curse. It was incredible, but I have been spoiled. It will be a while before I’m riding that kind of a high again. 10,000 plus arenas every night. His crew treated us like rockstars. The bus life. No rental cars. We had an absolute blast. I watched Thomas crush it every night. #showgoals! I learned how to treat an opening act in the future. Honestly, every Wednesday night I was a little giddy to get back out there. I am forever grateful to Thomas for that opportunity. I’d do it again in a heartbeat.

TC:​‘boom.’ is going to be a controversial album with some of the traditionalists – if they thought Sam Hunt was not country, you’re pushing the genre a little more. How would you answer these comments?

TC:​”You Broke Up With Me” is such a clever song as you would initially think it was the age-old story of girl meets boy, but it’s actually a song to Nashville after your previous record contract ended. Can you tell us more about that track?

WH:​Yes. When I lost a record deal about 6 years ago, I lost so many fair weather friends. It was really hard to get anyone to respond to emails, phone calls, etc. I understood, but it still hurt. When Shane signed me all the sudden people came out of the wood work wanting to write/collaborate again. I was like, WTF. “Where were you guys 5 years ago?” They were a little upset at my reluctance to reconnect. I was like “hey, y’all broke up with me.”

TC:​How does it feel to be the flagship artist for Monument Records?

WH:​I’m not worthy. That’s how it feels. Of all the talented people in this town to have the opportunity to be one of the flagship artists for Monument Records is just surreal. No pressure hahaha! It really is the opportunity of a lifetime. They are growing as I type and the talent is remarkable.

TC:​Finally, good luck with ‘boom.’ we can’t wait to see you in London next March.

WH:​Thanks. So much. Really. We are so proud we can’t stand it. I hope you enjoy the album and I can’t wait to hang. 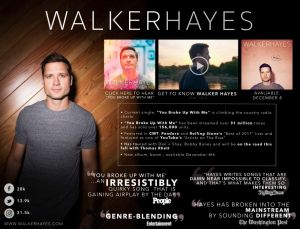