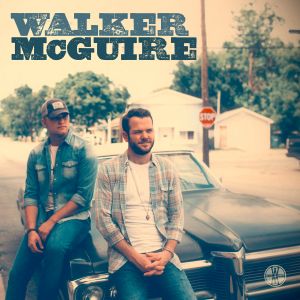 when they impressed the capacity crowd with both their songwriting and confident acoustic performance, their vocals being truly fantastic both individually and in harmony. The pair ( Johnny McGuire and Jordan Walker)  have already created a huge buzz stateside, touring relentlessly in the past couple of years and releasing two singles,  “ ’Til Tomorrow” back in 2016  and more recently “ Lost”  both of which appear on the EP. Teaming up with some high profile names including Brent Anderson and Kristian Bush the duo have co-written all of the five tracks, the first three being pretty intense ballads, with the closers picking up the pace a bit and being more lighthearted in subject matter.

So, the EP kicks off with two love songs,  “ Mysteries of the World” and “ Lost”,  the afore mentioned current single
I heard the opening track live in London and it’s great testimony that it sounded familiar after hearing it just the once, and for me it’s one of the EP’s stand out tracks. I particularly love all the analogies used. “ Lost” clever describes that feeling of how you can be in totally familiar surroundings yet just a smile or a kiss from that special someone can totally transport you. I must say that while these two are both beautiful and moving I find them very similar sonically, strange as they have only one writer in common! On an album or if they weren’t consecutive tracks maybe this wouldn’t have been so apparent?
Another that the pair showcased in London follows,  “Til Tomorrow” is the third slow tempo track, but this time a break up song. It really paints a fantastic picture, finally venturing out to a bar several months after the relationship ended where for a short while things can be forgotten…..but of course the next day reality kicks back in. Not a new concept but particularly well conveyed.
“ 18 Forever” is a faster track which is a nostalgic look back at their youth.  Probably my least favourite on the EP, if I had to pick one, but I can imagine it it going down really well live and once again there’s some great and relatable  lyrics…. “ Back when freedom was a set of car keys and we were half a tank from anywhere” ….” We got tattoos on a dare, ‘cos we didn’t care” caught my attention immediately!
Closing the EP is “ Best Kinda Bad” which I absolutely loved straight away, especially the opening lines which describe the girl this is written about as a “ Tom Petty girl in a boy band world” ( it very cleverly samples “ Free Falling later on) and having “ a fast set of keys and a fake I.D.” It’s a song where guys listening to it will want to know this girl, and females will probably aspire to be her! Its chorus is totally infectious and I really hope this will be released as a single at some point! Modern country music doesn’t get much better.
All in all this is a  collection of songs rooted strongly in trad country but with a fantastic modern twist. The lyrics are both important and to the fore, with the production ( Mickey Jack Cones at the helm) allowing them to be heard clearly above the guitar/drum-driven accompaniments, and there are some great guitar solos too! Vocally it’s superb, and i can’t wait to see what the future holds for this exciting duo……hopefully a full album and a return to the UK very soon.
TRACKLISTING