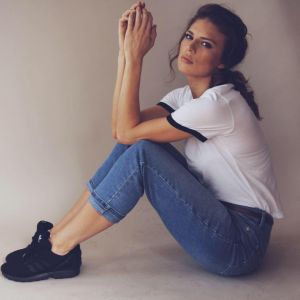 Hailing from Yorkshire Twinnie  started early in the arts world performing in several musicals throughout her childhood. However she is best known for her role as Porsche McQueen in Hollyoaks, joining the cast in 2014 after a friend dared her to go in for the audition. The following year she quit the show to pursue her career in music.

Signing a publishing deal with Universal Music she met with Ben Earle, now one half of The Shires,  to co-write their track ‘Black & White’. Together they formed a country duo, but Twinnie left soon after, deciding that she wanted to sing as a solo artist.

Released in 2016 her self-titled EP contains four tracks, all of which were self-penned. Two songs, ‘Cool’ and ‘Home’, went on to be released as singles.

There’s Country/Americana vibes present throughout the duration of the record. ‘Cool’ is the opening track and I’m instantly drawn to her gravelly tone. Lyrically it details a break-up but its catchy melody has you looking at the situation in a positive light. It’s no wonder this charted at #2 on the UK country chart. ‘Home’ shows a more poppy side vocally and is reminiscent of Ella Henderson.

The heart wrenching ballad ‘Lie To Me’ is the first taste of Moore’s vocals in an acoustic setting. Her vocal delivery is still able to grab my attention despite the lack instuments – perhaps even more so than on the previous two tracks, making this one a game changer, and my personal favourite of the four. Finishing off with a personal tribute to her Grandad ‘Looking Out For You’ is a beautiful folk ballad that sees her reminiscing about her childhood. It wraps up the EP on a sweet note.

With her talent for songwriting and outstanding vocal ability, I can predict that Twinnie has a bright future ahead of her.

Look out for our interview with her coming soon.