The Think Country Team had their hands full trying to pick our next Superfan.  Multiple nominations came in for a few different people and each one was, indeed, a great fan.  Like always, only one person can be chosen and this time we’d like you to meet Andrea Isaac of Weston-super-Mare, a small town in the South West of England.  Isaac is a Superfan of UK country music artist, Kezia Gill. 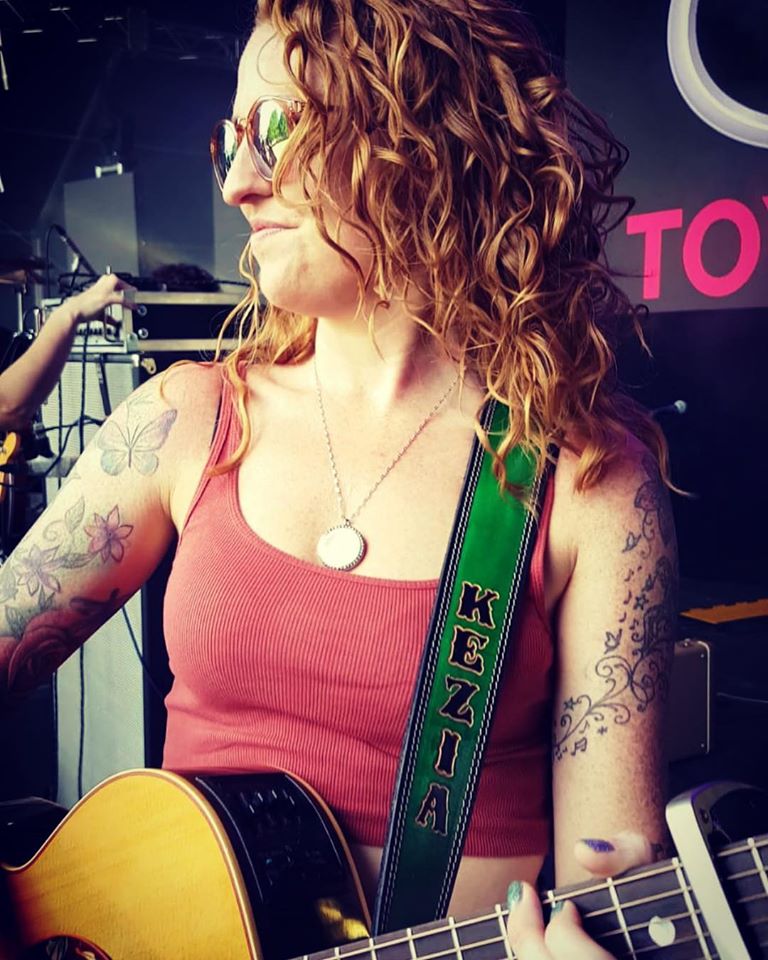 “Derby Based Singer/Songwriter Kezia, has been singing professionally for over 10 years. A delicious mix of Irish and country influence, her sound is completely unique.

Kezia plays all over the country, not only performing her own material, but bringing her own vocal style to a variety of classic covers; With her unique vocal style, and skilled acoustic guitar playing, she makes every song her own.”

I must admit, I had very little knowledge of Kezia Gill myself, but I’d heard a song or two and knew I loved her voice.  Writing this piece has introduced me to a whole new world of Gill’s music and really, this is stuff I wish everyone would check out.  She’s fabulous.  It doesn’t matter what I think anyway, Andrea Isaac of little Weston-super-Mare knows how good she is and that’s why she’s a Superfan.

Being a Superfan is fun, but unfortunately, life sometimes gets in the way.  You know, work and things like that.  Isaac is a full-time Emergency Services worker who said, “The last few months have been very challenging, as they have been for many people for lots of different reasons.  Live music and theatre are my passion and my stress relief, so I’m really missing that at the moment.  I’m also in a choir, and I’m a keen tap dancer!”  A singing, tap-dancing emergency services worker.  Can you imagine someone like that coming to save you?  At least that might brighten up the situation a bit.

Passionate about country music, “as it’s heartfelt and I find I can identify with the lyrics”, Isaac doesn’t limit herself to the genre when it comes to what she listens to.  “I love a bit of rock, musicals, folk and pop.”  The first concerts she ever attended were an eclectic mix, including Aerosmith, Bon Jovi, Bryan Adams, Tom Jones and Erasure.  Isaac said, “I think my favourites have changed depending on where I am in my life.  The past seven or eight years I’ve supported and listened to country artists, both international and UK-based.  Keith Urban, Ashley McBryde, Cam, The Wandering Hearts, Ward Thomas and Sean McConnell are just a few of the acts she has seen more recently.

We probably wouldn’t be here talking about Andrea Isaac from the South West of England if it weren’t for Kezia Gill, and it was purely by chance that Isaac learned about Gill in the first place.  She explained how that happened.  “Kezia was appearing at a festival we were attending.  It was the Buckle and Boots Country Festival held near Manchester.  She was singing ‘House of Cards’ and she literally blew us away!  So much energy and passion.  My favourite lyric from that song is ‘When the idols of tomorrow were chosen yesterday’.  The whole festival was amazing.  We were introduced to many new artists we’d either not heard of or not seen live before.  We’ve been to the festival every year since and wouldn’t miss it.  Kezia was definitely a standout memory of that festival.  Even though she was on a small stage at a random time of day, she had a crowd and made everyone pay attention and listen!”

All across the globe, this pandemic has been so difficult for artists and music fans alike.  Everyone wants to get back to the live music experience.  Over in the UK, they were saddened to learn that the very festival where Isaac discovered Gill’s music, Buckle and Boots, has been canceled.  Scheduled for August 28th-30th, it was just announced this week, that the festival, like so many others, would not be happening.   Especially disappointing for Kezia Gill and her fans, as she was set to headline the Friday night show during the festival. 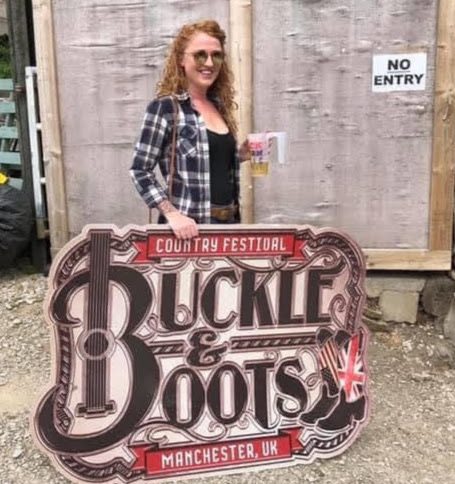 So many serious fans of other artists have quite a few, if not tons, of photos of themselves with the artist or band they adore.  Not so with Isaac.  She’s met Gill while purchasing merch or getting signatures, but has never had the courage to ask for a photo.  There’s a little more to that story though.  “I also hate photos of myself, so I avoid it whenever possible,” she confessed.  I would hope once concerts start rockin’ again, Isaac and Gill will finally get that photo that Isaac has been too timid to request.  I’m sure she’ll look just lovely in it too.

What is it about Gill that Isaac enjoys so much?  Actually, there are several things.  “Kezia is so down-to-earth, so generous with her time and so talented.  Kezia and her husband Lloyd have live streamed from their living room every week since lockdown on Friday nights from 8 to 9:30 PM, but it often runs over because she’s chatting and trying to get all of our requests in.  Theme nights, and so much fun with movie nights, 80’s night and others.  They get dressed up and so do her Friday Night Crew, and we all share photos.  Also, a lot of discussion about whiskey!”

She excitedly continued, “She really cares and always celebrates birthdays and anniversaries.  Sadly, I lost a good friend and 20-year colleague during lockdown, known to many as ‘Nessie Noo’.  Kezia did a live dedication to her and her words were perfect and very heartfelt.  Nessie Noo’s family really appreciated it.”

As proof that Gill has both feet firmly on the ground, when she performs live at festivals, she always does her best to support her fellow artists and joins fans in the crowd.  The photo below shows Gill at a music festival, right out in the thick of things, dancing with her mum. 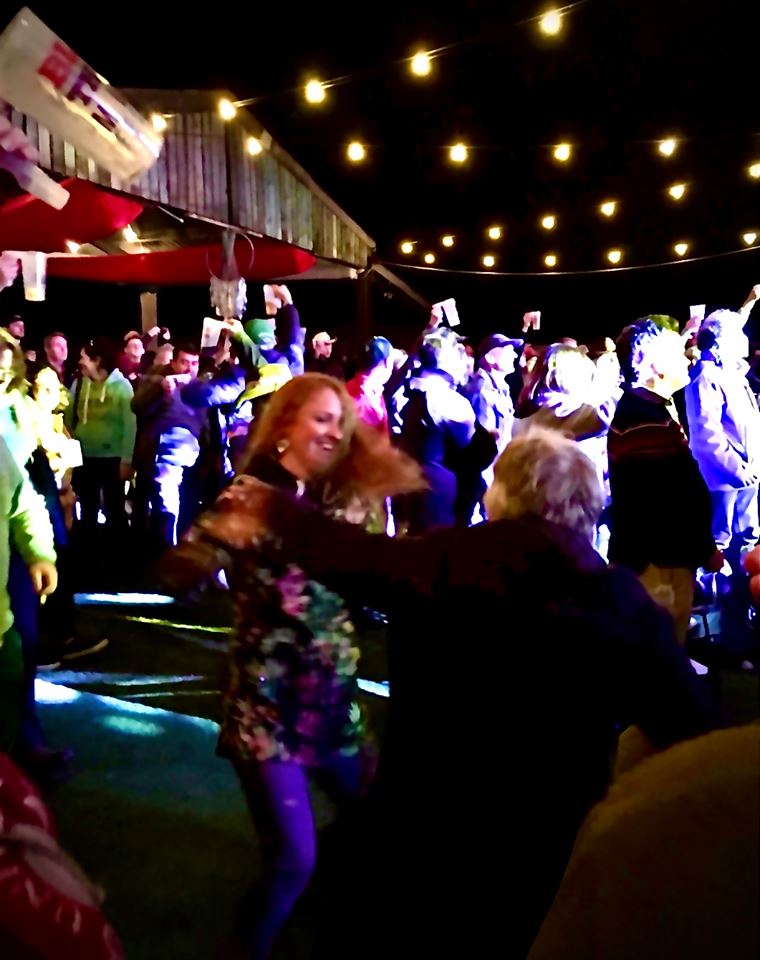 We know that Isaac stands in those merch lines because that’s where she’s had the opportunity to meet Gill, but what is she buying?  What’s her favourite Kezia Gill merch?  Isaac keeps it simple and told me, “Signed Kezia CDs, as these are all about the actual music, however, I do love my 2020 Lockdown t-shirt, as this really represents the joy Kezia has brought us each week during these difficult times.” 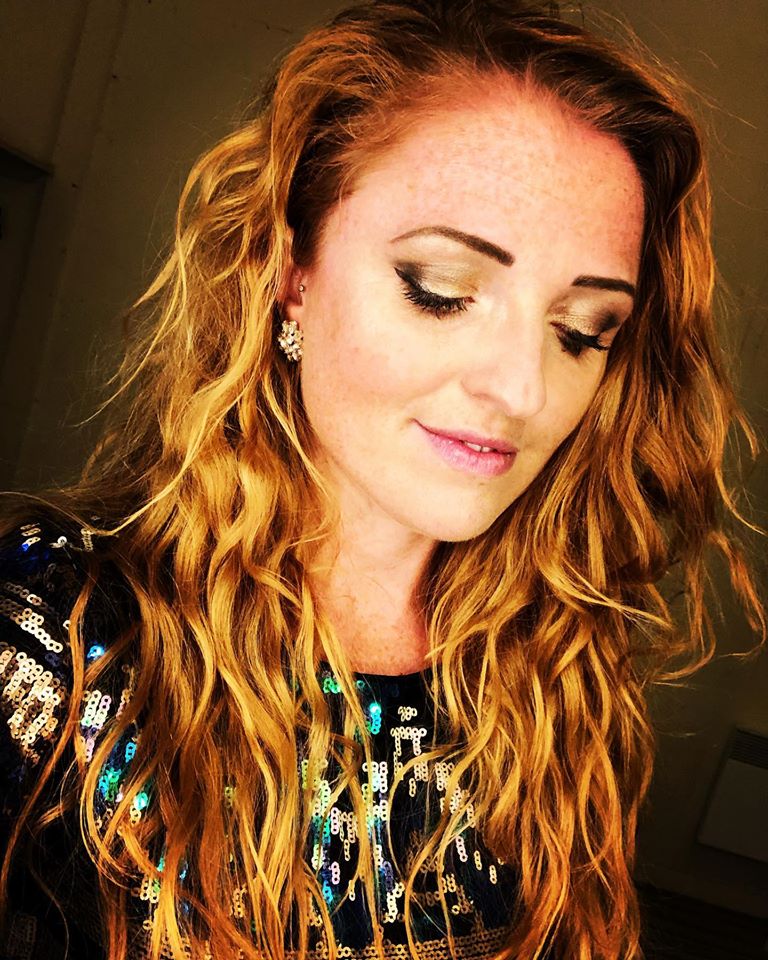 At this point, readers may be scratching their heads a little.  Yes, Isaac sounds like a great fan who enjoys Gill very much, but what makes her a Superfan?  What really sends her over-the-top and into that next level of fandom?  It was a little (okay, maybe a lot more than a little) something Isaac put together to thank her favourite artist for being a light in a rather dark period in history.  I asked her to elaborate and tell me how this incredible project came to be.

Isaac spelled it out from start to finish.  “I really wanted to do something special for Kezia, or make something to say ‘thank you’ for everything she’s done during lockdown.  I had a few ideas but none special enough.  Then I thought if I was feeling that way, maybe others were too, so why not get as many people involved in my project as possible.  I’m a true believer in action for happiness and paying it forward.  So, the idea was born to do a video.  I messaged 152 people, none of which I knew, other than from comments during live streams.  Since the hundreds of emails were sent, the collection of the photos was done and the production of the video was complete, we’ve become a Friday night family and made new virtual friends.  Out of this, came a dedicated Kezia Gill #Fridaynightcrew Facebook fan group, which already has over 500 members in just a few short weeks.”

She went on to say, “The video is a compilation of photos, each with the subject(s) holding a word to make up a message that I set to one of Kezia’s own songs.  We then planned a Friday Night Crew Takeover and interrupted her live stream so we could watch her watch the video for the first time.  Kezia and Lloyd’s reaction was so emotional, many tears from her and those watching.”

Nominated to be a Think Country Superfan by some of the members of the Kezia Gill Friday Night Crew, our team believes we made a sound decision in choosing Isaac.  This was a major undertaking.  Don’t believe it?  Just watch the first video above.  It’s superb!  Then watch the video that follows to witness Kezia Gill’s reaction to the completed project.  It’s priceless!

As we like to do with our Superfans, we offered the floor to Andrea Isaac.  We gave her a platform to speak directly to Kezia Gill and say anything she liked.  She wasn’t shy at all this time.  “Really, it’s a few things.  Believe in yourself and don’t give up.  Your time will come and I can’t believe you aren’t already signed!  Thanks for being so honest, open and sharing your house with us all, and giving us something to enjoy during these difficult times.  I can’t wait to see you live again soon, and I promise I’ll be brave enough to ask for a photo!”

That’s encouraging to hear!  Oh, and when that photo happens, please share it with Think Country.  We’ll kind of be waiting for it.   For everyone else, absolutely go follow Kezia Gill on her socials and check out her music.  Her voice is so unique and beautiful, and just like Andrea Isaac, you’ll be blown away by it.  It’s too bad you can’t see her live at the moment, but there is that Friday Night Crew thing over on Facebook… they sound like a fun bunch.  I would bet they’d welcome a few more friendly music lovers in the door.  The link’s below.  Go ahead, knock. 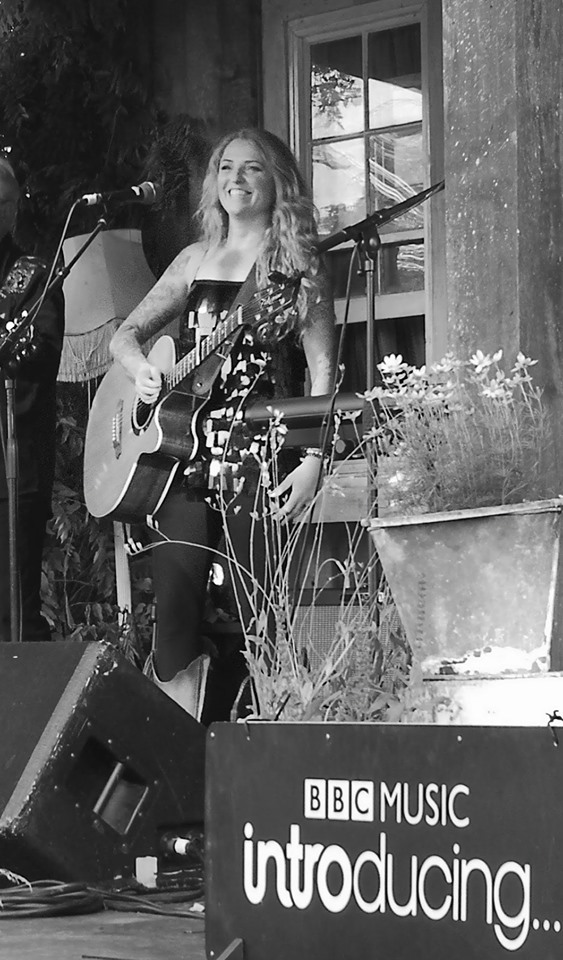