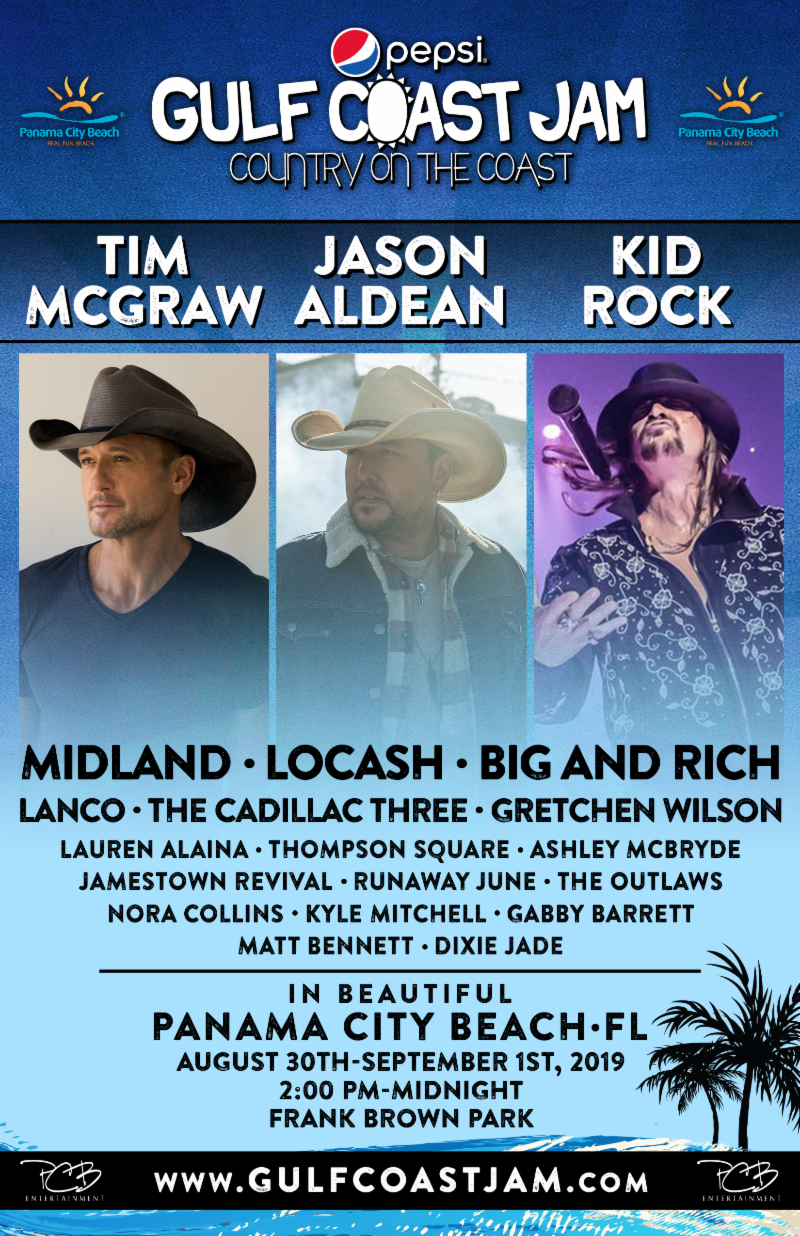 Producers of the 7thannual Pepsi Gulf Coast Jam took to social media  to reveal the full lineup for this year’s Country On The Coast festival, simultaneously announcing some of the biggest names in music on the Pepsi Gulf Coast Jam and Visit Panama City Beach Facebook pages. Tim McGraw, Jason Aldean and Kid Rock have already been named as this year’s headliners, and they will be followed by Midland, LANCO, LOCASH, The Cadillac Three, Big & Rich and Gretchen Wilson.

“This group of artists not only represents three decades of amazing music, but countless awards, #1 singles and top-selling albums,” said Pepsi Gulf Coast Jam Executive Producer Rendy Lovelady. “We can’t wait for all of them to hit the stage for another amazing event.”

Pepsi Gulf Coast Jam producers have committed to donate $10 from every paid ticket sold to benefit panhandle hurricane relief. Tickets for the three-day event, which Billboard Magazine named one of “The 10 Best Country Music Festivals,” are currently available at www.GulfCoastJam.com. General Admission tickets are currently $139 plus fees. Military tickets are only $129 for all three days. That price will not increase, but quantities are limited. VIP Pit tickets are $429, Golden Circle are $699 and Side Stage tickets are currently $1,150. Skyboxes are sold out. Payment plans are also being offered, and details can also be found at www.GulfCoastJam.com.

“We’re blown away by the response to this year’s Festival, just on the strength of our headliners,” added Pepsi Gulf Coast Jam COO Mark Sheldon. “Panama City Beach and Bay County are amazing partners in this event, and we’re excited to continue our work raising money for hurricane relief in our community.”

Parking passes for the Pepsi Gulf Coast Jam have traditionally been sold on site and always sell out. For the first time, parking passes are being offered online at www.GulfCoastJam.com. In addition, a limited number of Early Entry passes are also available for sale online.

Going to CHURCH in crop tops & back to Midtown – CMA F...