Friday morning began with the news of some troublesome weather in the area (apparently?) so the outdoor stages were pushed back a little which meant that a little extra sleeping in combined with our new life changing discovery that is the mythical power of Crystal Light we were again all absent of any hangovers. The later lie in also gave us the chance to wait for Amy to get into town from Franklin and we all went and some breakfast at Dunn Brothers which does awesome coffee and is situated at 401 Church Street just on the corner of 4th Avenue – This is definitely a great spot and really reasonably priced for good quality breakfast and some of the best coffee we had in Nashville.

From here we made our sole trip of the festival to the Chevy Riverfront Stage, it wasn’t as hot during the festival as last year but you are still exposed to the elements with no shade from the sun and no cover from any potential rain in the area. We all caught Dylan Scott’s set who I hadn’t actually heard of before so that was quite a pleasant surprise as I suppose he was my CMA Fest 2019 discovery. The crowd were really going some and I really liked what I heard so I have been listening to his stuff on Spotify all morning as I’m writing this so am definitely now a fan! – C2C organisers this guy would be an absolutely great for our festival next year with the mix of what he brings to appease a wide variety of UK country fans.

I ditched the girls after his set whilst they stayed to watch Mitchell Tenpenny and Maddie & Tae. I tend to try and not have regrets about things in life but this decision definitely was one of them! A friend back home I play cricket with that has recently got into country music has been raving about Mitchell Tenpenny as someone he is really digging and Katie had said after he was awesome so was definitely gutted not to catch his set and who doesn’t love Maddie & Tae, especially as their new stuff is so good! The reason I headed off essentialy became a cataclysmic shitshower that was an absolute waste of my time which made missing both of these acts more frustrating but was something that I have learnt lessons from, so we will leave it there! 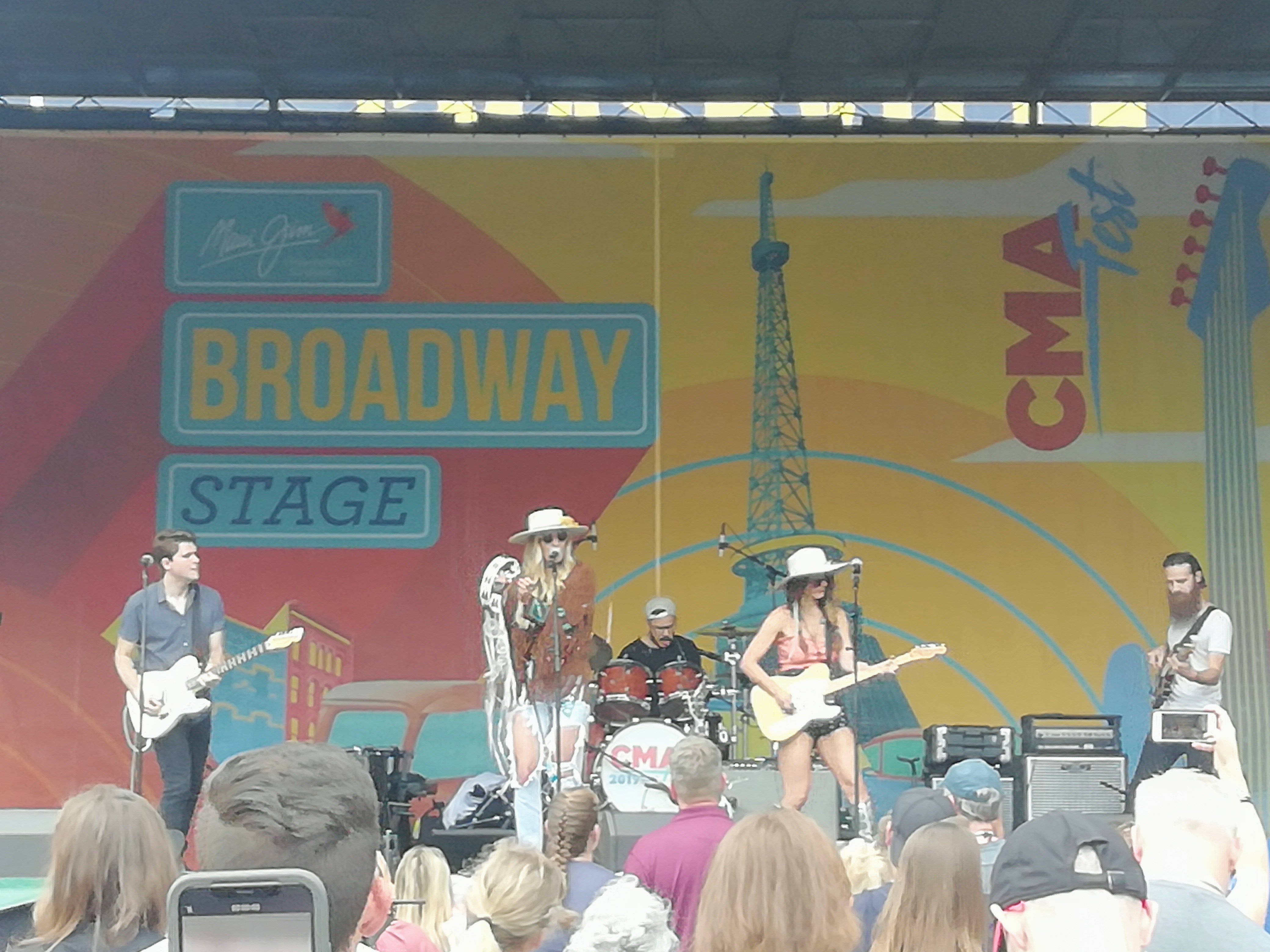 However beer solves a lot of problems especially when in comes in 25 fluid ounce cans! These were the only size beers you could get at the Maui Jim Broadway Stage in front of the Bridgestone Arena and for any Brits not sure on the US measurements its not far short of a pint and a half in a can! Quite a lot of the Brits I knew were all heading over to this stage to catch Nashville Meets London alumni The Sisterhood Band. Ruby and Alyssa were incredible when they played at Canary Wharf last year but with a full band behind them WOW!!!! This was loud, absolutely rocking and again being another great example of how the girls are tearing it up in Nashville! Hopefully the girls can come back over the pond to see us again soon! 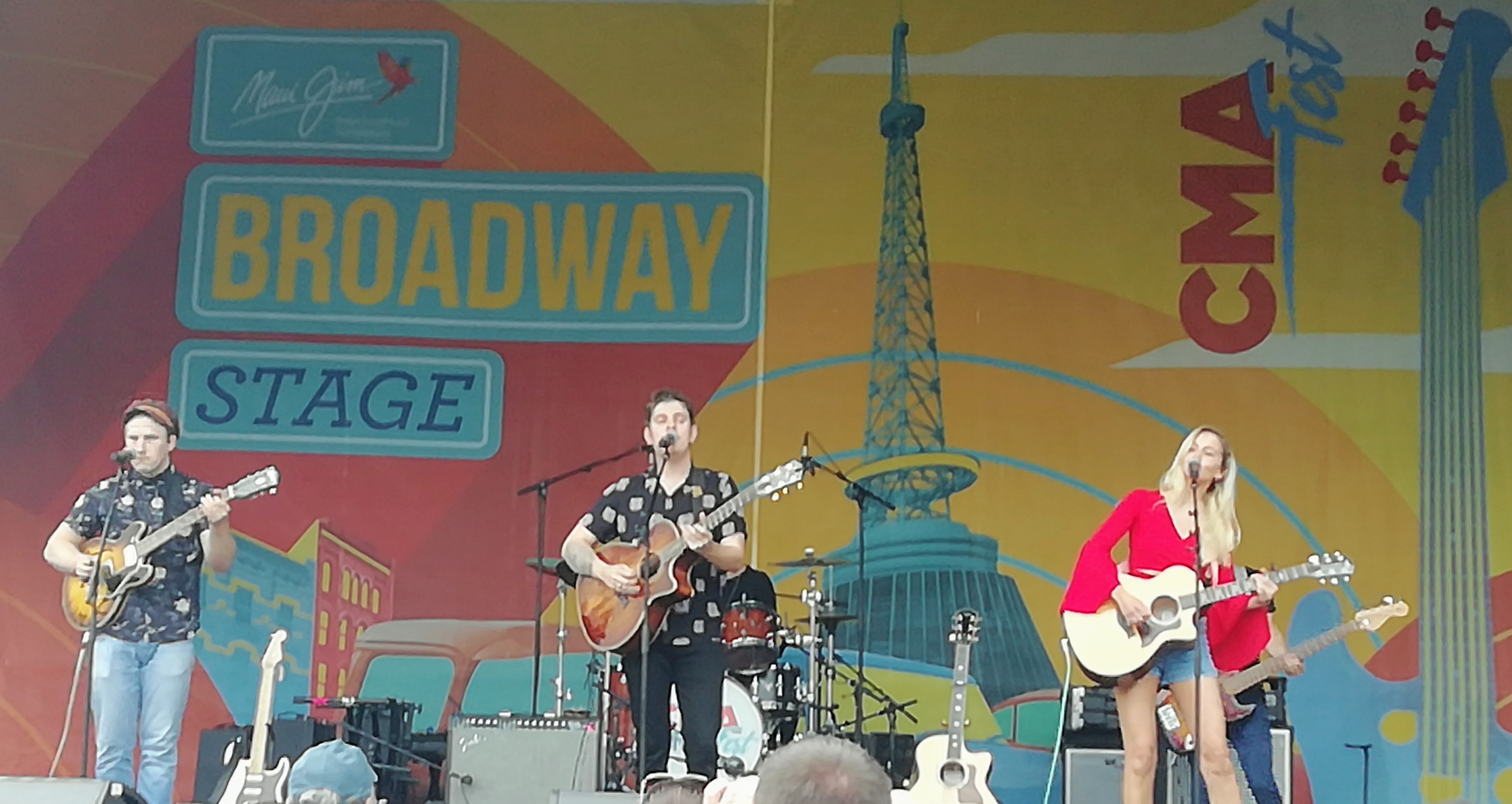 Talking about people hoping to come back over the pond soon, on the same stage we had our absolute favourites here at Think Country. After the first time I saw them during country music week last year, interviewed them 2 days later (which you can check out HERE) and kept spreading the word ahead of them returning to London for Country 2 Country this year we have made sure we have gone out of our way and used every possible opportunity to let anyone who will read or listen to us about how good Fairground Saints are!

It was fantastic to see them in the States and great to see songs from their EP “Magic” (which you can read more about HERE) played full band! I spoke to Mason after their set and caught up with all 3 of them the following morning when I was picking up some merch for friends back home and they all told me firstly they are really thrilled by the response they have received in the UK and are really excited to come back which they hope will be in Autumn.

From here we all headed back onto Broadway and piled into Crossroads (a bar I had never been in before but quite liked actually) to get out of the rain. If you caught the spoiler in my previous piece this is where it came down. Friday was all about seeing 1 man in the stadium and me and Emma along with pretty much everyone else in Nashville are massive fans of Eric Church and the day before we had seen both Kassi Ashton and Kalie Shorr wearing an awesome Desperate Man t-shirt so we like we need that top! Eric had a pop up store at a bar called the Flying Saucer Draft Emporium at 111 10th Avenue South so we headed over to try and find them. Firstly this is a really cool bar that has an insane amount of draft beers, I received a drunken recommendation from Megan O’Neill about this place (no surprise that a girl from Ireland that has been drinking tries to send you somewhere she has been drinking before) and it is somewhere that has to be on your Nashville to do list regardless! Eric Church merch just looks so much cooler than anyone else’s and I decided that the Desperate Man top in a ladies fit and style was just absolute badass which I couldn’t say no to and then me and Emma were proper twinning for the night. 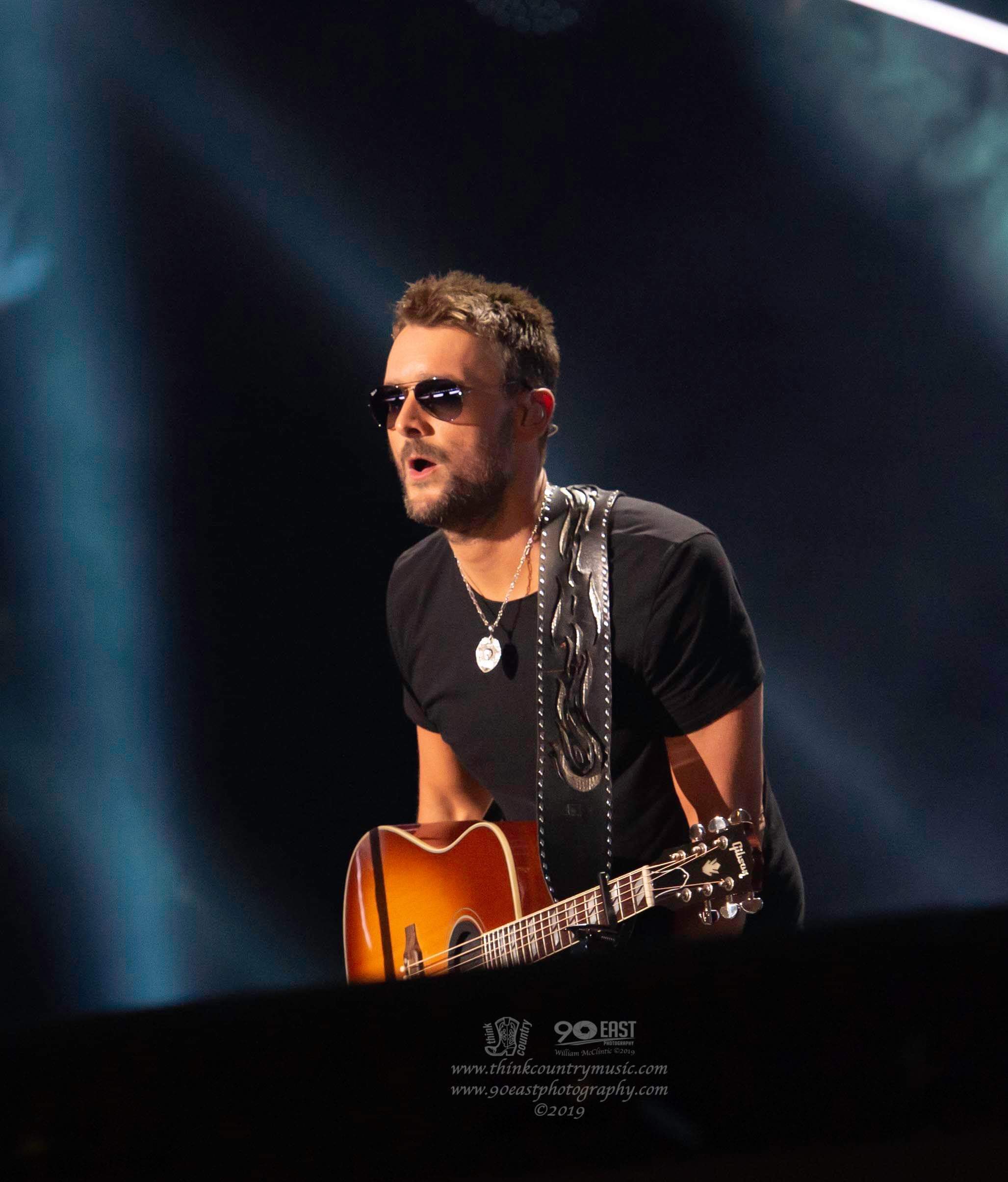 We headed back to our apartment on 3rd North freshened up and then grabbed some food with friends at the Downtown Losers Bar & Grill before heading into the stadium in time for Little Big Town & Dan + Shay but the focal point of the night was about going to CHURCH! Now I have seen Ed Sheeran play to a sold out Wembley Stadium in London just him on his own with a guitar, keyboard and a loop pedal which I did not think anything would ever come close to but OH MY God this 25 minute set was the most magical thing I have ever seen! 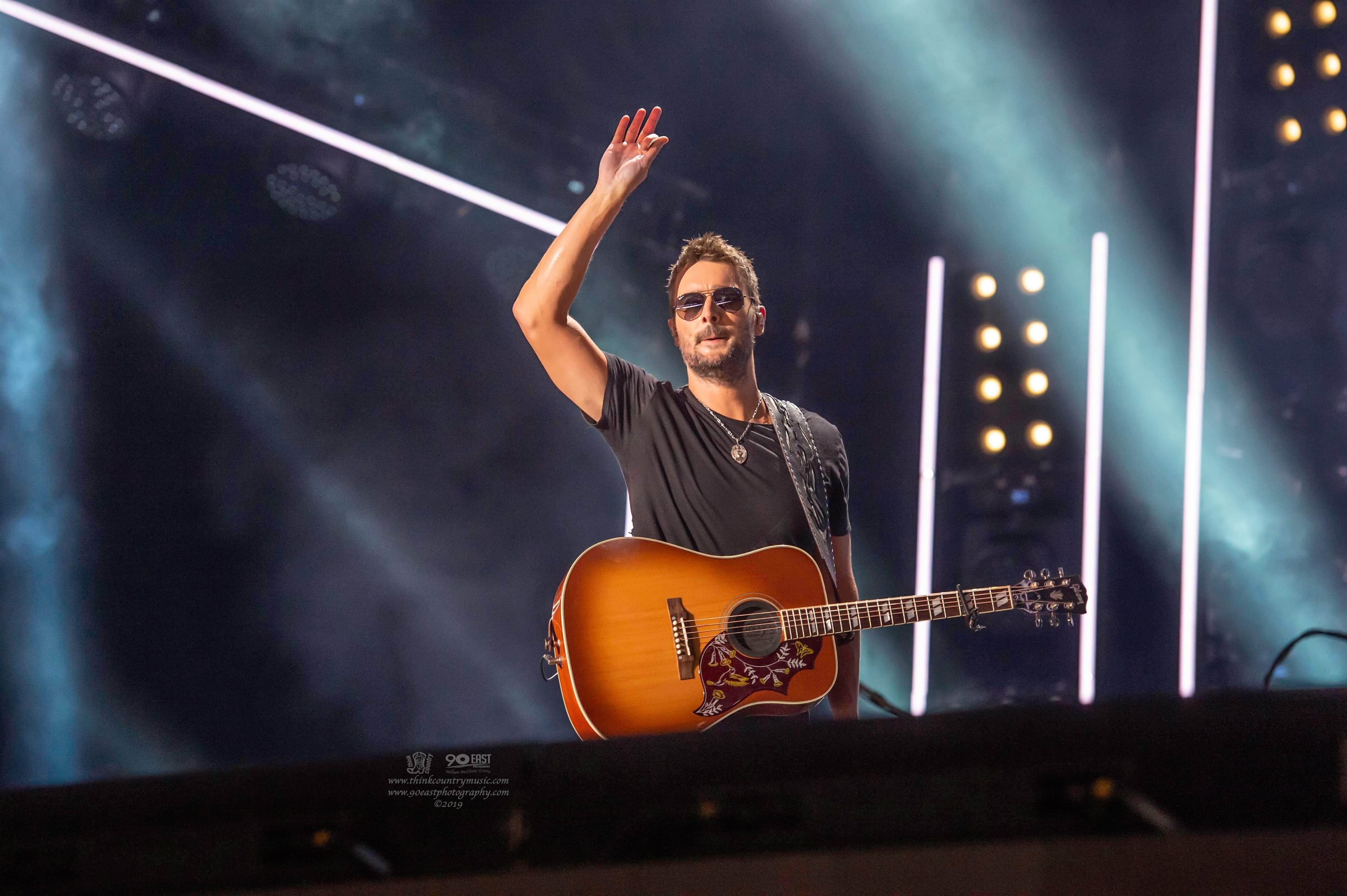 Just one man on an acoustic guitar who stopped once half way through to sip his drink just played an nonstop medley of all of his hits back to back! It is clear to see why this guy recently set the new record attendance for a solo performer at the Nissan and although we had seen him play arena shows in London before this was truly special! This performance was worth all the travel time and money that I had spent on the trip on it’s own! Prior to coming to Nashville I was almost falling out of love with country music in a way. I am not someone that would say I am an out and out country fan, just that a lot of what I enjoy falls under the umbrella of country but I love rock and electro pop amongst other genres equally as much. What I like about country songs is that they are real stories and people are passionate about them and Eric’s performance was that kick I needed to remind me why I love the genre!

We left after his set as about 10 of us had agreed to head back down to Midtown so some of the others could experience why we enjoyed it so much. We jumped in a couple of taxis and had a fairly civilised evening by our standards back in the original Losers (that’s surely a contradiction in terms if ever I had wrote one) as we had already decided by this point of the trip that we were keen to get off Broadway as much as possible to end day 2 of CMA Fest 2019!