‘This One’s For You’ 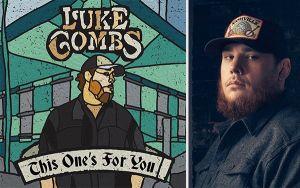 The first time I heard Luke’s distinctive voice was on a Sony Nashville Sampler CD. The song in question was ‘Hurricane’ and his powerfully controlled, yet still edgy and rocky vocals had me at odds with the pop, bro-country style of the song, complete with a truck and a girl. But I liked it. A little at first – growing on me gradually, then sneaking up suddenly, and BOOM! Smacking me round the face shouting ‘WAKE UP Caroline, Who IS this guy?’ What a voice.

Signed to Sony Music Nashville, Luke hasn’t been an overnight success, but his is a story of fame grafted from hard work, determination and his clever use of social media and streaming. He is an extremely talented singer/songwriter and this is clear throughout the album.  It’s chock-a-block full of well-crafted songs, beautiful melodies, topped with a great production – a surefire No.1 album, which is absolutely going to be a highlight of 2017. Luke’s voice is a mix of Southern rock, a twang to rival Blake Shelton and a tone that means business. It’s what I’d imagine Rag’n’Bone Man to be if he’d been born in the USA.

Those vocals, armed with an album full of easy going, relatable songs full of beer, girls & fun, makes for one of my favourite summer releases this year. Opening the album, first song ‘Out There’ is a track full of superb melodies, rock guitar, a big chorus and a great range of vocal prowess. Not a bad start. ‘Memories Are Made Of’ keeps the good times rolling with a great beat and fine-crafted, nostalgic lyrics. I’ll even let the Bon Jovi-esque “woah oh oh oh’s” go with hardly a mention…!

Ballads such as ‘Lonely One’ & ‘This One’s for You’ show the genuinely sincere side of Luke’s craft with touching, intelligent lyrics. He proves that he can flip the sensitivity and create a fun-filled, humorous song to rival even Brad Paisley’s best comical moments with songs like ‘Beer Can’ and ‘Don’t Tempt Me’.  The ability to sing about getting blind drunk and thinking you’re Superman and in the latter track, enjoying beer with your breakfast is easy enough to do at 27. Those of us that are older like to pretend we can still do that too, although the reality is quite different. Singing along with these songs however, makes you still feel like you are still 27 (or even younger) too. Any song that can transport you back into a fantasy is a keeper, especially with clever lyrics and a play on words that transcend the song from a dumb anthem to a way above average country hit – ‘Any flavour, or brand, till the point that I can’t stand…nothing picks me up like a Beer Can.”

The melodies continue, great songs tumbling out one after the other – ‘One Number Away’ which I feel is a pop-country tune in the same vein as Chris Young’s ‘Losing Sleep’, ‘When It Rains It Pours’ another fun tune about turning bad luck on its head and red flag to Mother-In-Laws the world over, ‘Be Careful What You Wish For’ and ‘I Got Away With You’.  The last song is cleverly written, although every time I hear it I get slightly pedantic. You can’t break out of Buckingham with the crown jewels as that’s a town in North Buckinghamshire, its Buckingham Palace. But I get that didn’t fit. I really do.

The song that closes the album, ‘Honky Tonk Highway, is an absolute belter of a track.  A real party tune with a heady flavour of early 90’s country.  Put it this way, I’d push my table and chairs aside and make a party in the kitchen/diner for it – that’s just how I roll.