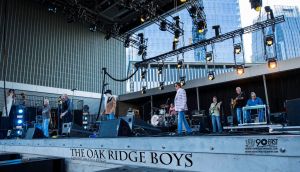 We can talk about “legends” all day in this town.  Long ago legends you can learn about in museums by strolling past their concert worn clothing or even visiting their gravesites and paying your respects.  Then there are living legends, and among those living legends are a smaller subset of artists who are not only still with us, they are still performing, and performing exceedingly well.  You can count The Oak Ridge Boys at the top of that list.

The original group began as gospel and country music performers in Oak Ridge, Tennessee where the atomic bomb was being developed and called themselves the Oak Ridge Quartet.  They began making Grand Ole Opry appearances in the fall of 1945. 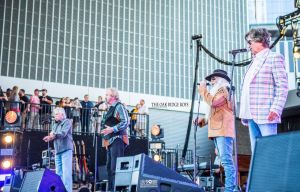 Flash forward to the late 1960’s, having had more than 30 members come and gone, they had a lineup that included Duane Allen and William Lee Golden.    During this time, friendships developed between the band and Philadelphia native Joe Bonsall who happened to sing tenor and a clothing store salesman named Richard Sterban who also sang in quartets.  When openings for both a tenor and a bass came up in 1972 and 1973, you can easily guess who they thought of first.  Sterban joined in ’72, Bonsall in ’73.  Except for an eight year hiatus (1987-1995) for William Lee Golden, the group has remained the same since the late 1960’s.  An instantly recognizable blend of perfect four-part harmonies made up of Allen on lead vocals, Sterban on bass, Bonsall, tenor and Golden, baritone.

In 1975, under the advice of singer Roy Clark’s manager, the band started singing country songs and things really started happening.  It’s been all uphill since then.  They’ve won just about every award you can name, kept fans happy by keeping up a consistent tour schedule and challenging themselves by working with artists in other genres.  For example, in 1977, almost right out of the gate, when things became successful for them with country music, they sang backup for pop artist Paul Simon on his hit song “Slip Slidin’ Away”.  This began a pattern that continues to this day.  Most recently the Oaks recorded a cover of The White Stripes’ “Seven Nation Army”, and went the distance to be sure it was right by commissioning Pop-Rock producer, Dave Cobb for his vision and expertise.  It appears to be a hit with the younger people in their audiences.  This shows they aren’t slowing down anytime soon.

With all this information in my back pocket, I was more than ready to see just what The Oak Ridge Boys were going to do for CMA Fest 2017.  It was the first year for the evening shows at Ascend Amphitheater and the Cracker Barrel Country Roads Stage.  A nice diversion from the madness of the Nissan Stadium shows if you simply needed a bit of a change.  The entertainment was still top-notch, it was just a smaller venue and less chaotic.

Without reserved seating, you needed to be there early if you were intent on being up close.  Anyone that was fooled into thinking because The Oak Ridge Boys are “an old band” there would be plenty of seats would have been dead wrong.  These guys still draw quite the crowd.

The Oak Ridge Boys are backed by their own band who they like to call “The Mighty Oaks” and mighty they are!  They have to be to keep up with these guys!  Jeff Douglas on guitar and dobro, Ron Fairchild on keyboards, Roger Eaton, lead guitar, Scotty Simpson, bass guitar, Rex Wiseman on fiddle, pedal steel, guitar and mandolin and newest member, Austin Curcuruto on drums.  Solid as the mighty oaks they are named after, it’s no wonder word on the street is playing for The Oak Ridge Boys is both a privilege and a pleasure.

The band was fired up and out came The Oak Ridge Boys and they were ready to welcome the CMA Fest crowd to Nashville!  They did it the best way they knew how with “Come On In” from 1978.  This was no audience of shrinking violets either.  Young and old were on their feet and dancing from beginning to end.

They followed that up with 1983’s number one hit “American Made”.  It was the first number one hit for songwriter Bob DiPiero, who has since gone on to write many number ones and countless top 20 hits. The song is about our obsession with electronics and the difficulty in finding any (which holds true even today) made here in our own country, but love? Oh, love, we can find that right here on American soil.  That’s a beautiful thing, and you can bet the fans at Ascend not only loved this song, they love the guys who sing it even more, as displayed by the dancing and singing that went along with the performance I witnessed.

The Oaks played favorites “Roll Tennessee River” and “Y’all Come Back Saloon” next, to legions of faithful fans, still on their feet, still singing every last lyric right along.  I loved watching the sheer joy on not just the faces of those fans, but the faces of The Oak Ridge Boys themselves.  This isn’t just a job to them.  It’s really apparent that this is a calling.  If they weren’t doing this, they would lose their identities.  Does it matter that they’re singing the same songs over and over year in and year out?  I really don’t think so.

“Leavin’ Louisiana in the Broad Daylight”, a number one from 1979 followed and was right before the one EVERYONE knows.  I don’t care if you don’t know who The Oak Ridge Boys are, you DO know what Joe Bonsall means when he says “How about we all sing “Elvira?!”  If you were one of the few who wasn’t standing yet, you were now.  How can you not love it?  It’s a little silly, it’s not ever going to be named one of the greatest songs ever written, but one thing’s for sure – everybody knows it and that has to count for something.  The party amped up as those perfectly executed harmonies the Oaks are known for were put to good use in a song meant more to drive up excitement than to impress music professors, and in a world where life can be a real downer, I’d say that’s a pretty wonderful thing.

Since I’ve been all over The Oak Ridge Boys for the last day, I dug up a few fun factoids about “Elvira” to share with you.  Don Frazier wrote the song “Elvira” in 1966 as the title track of an album he released that year.  The song was not inspired by the name of an actual woman, but by the name of a street in East Nashville, Tennessee.  So if you’re planning to name your daughter “Elvira” in honor of the late great lady that bore the name that inspired this beloved song, keep in mind the blacktop, street signs and curbs that may have been the true original inspiration.   The Oak Ridge Boys released their version of “Elvira” in 1981 and it quickly rose to number one.  It was certified platinum and remains their most recognizable hit to this day.

Imagining that was the end (I mean, in the world of the Oaks, “Elvira” kind of equates to the fat lady singing, or so you would think), people started gathering up their belongings, but WAIT, there’s more!  Yes, there was one more.  Giving these devoted fans one more dose of what they came for, The Oak Ridge Boys broke out into a great big version of “Bobbie Sue”.  What I love about this group is they encourage the sing-a-long like nobody’s business.  They don’t care how off-key, how much or how little of the lyrics anyone knows, they just love that people are giving it the best they’ve got.  Get up and try.  So what if you can’t keep perfect time when you clap?  Trust me. I live in Nashville, it’s a pet peeve of so many artists that fans can’t keep time when they clap, it’s a fact.  Clap anyway!  This is a good time group and they’ll handle keeping the time.  Speaking of time, where DID these last almost 50 years or so go?  Did I say these four guys have been together give or take for almost 50 years?  Nah.  I must be mistaken….