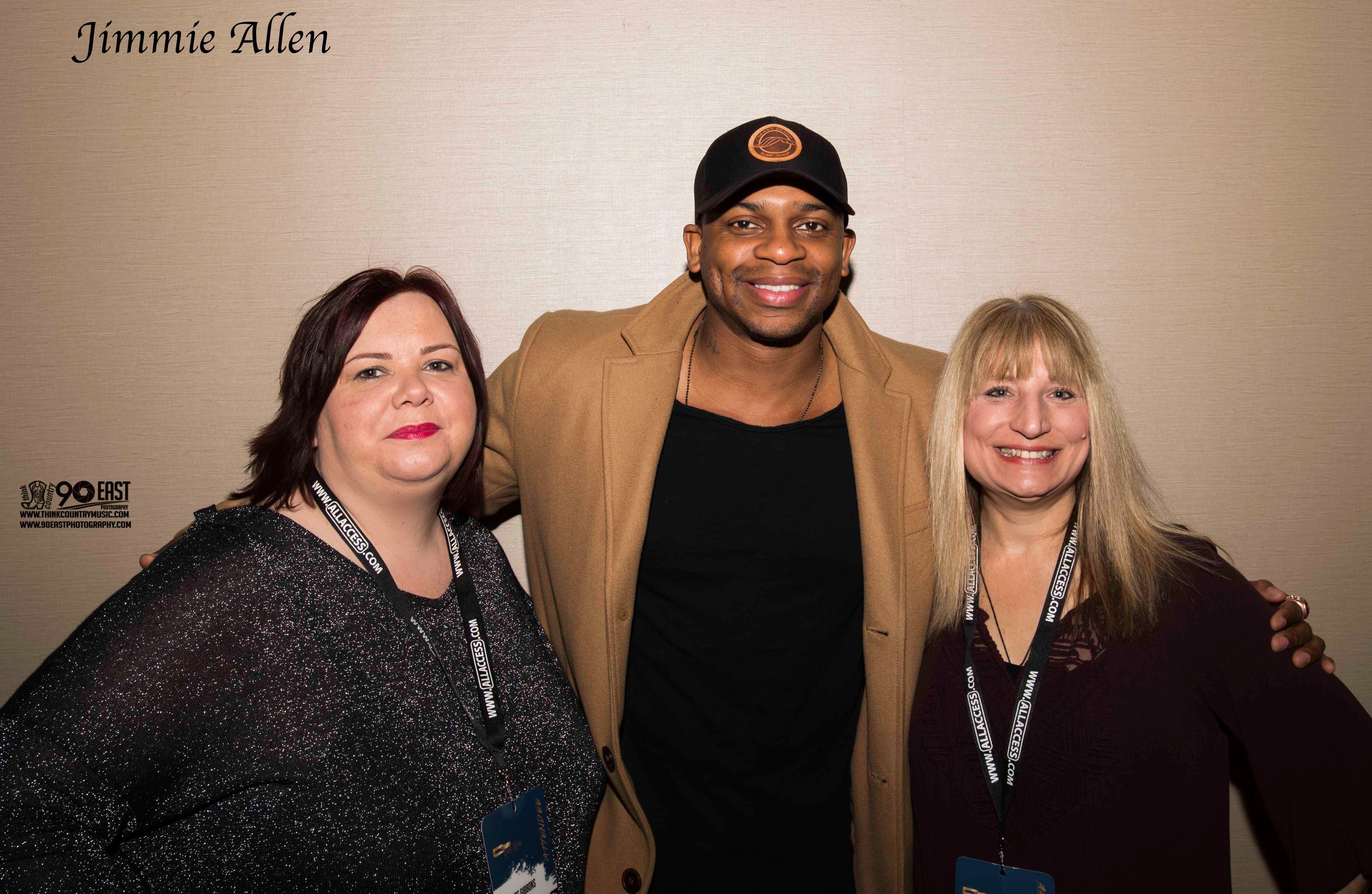 BBR recording artist Jimmie Allen is everything country music should be.  First and foremost, he has the voice.  It’s one of those that’s so easy to listen to, you kind of lose yourself in it, the vocals are just so clean and smooth.  He has the storytelling chops of the best songwriters, partly because he’s lived those stories firsthand, and he’s humble to a fault.  We were excited to interview him during CRS 2018, because although he was one of the newer kids on the block, having just been signed to BBR in 2017, he’s been working at this music thing for a lot longer than that.

When Jimmie Allen entered our little corner of the CRS world (better known as a curtained off cubicle), he knew how to butter us up by saying, “Anytime Think Country’s checking out something, I’m watching.”  Alright then, Mr. Allen now had our attention.  Not that he didn’t anyway, as we had the pleasure of seeing him perform at the BBR party and he was spot on.  This was one interview we were looking forward to.

Annette Gibbons, Think Country’s Founder, based in the UK, explained to Jimmie Allen that we are now a global outlet, and then asked if he would tell that global audience a little bit about himself.  “So, I am from Milton, Delaware.  I grew up in a household where my Dad listened to nothing but Country music and my mother listened to nothing but Christian music, so I kind of gravitated more towards Country after a while.  I got a little older and I fell in love with Rock and Roll and R&B and Hip Hop and my musical palette expanded.  I’ve always been into musical theater as well, so performing in church and in high school plays, I found out, wow, I could be a singer and a performer.  I was like, ‘Alright!  Let’s do it.’ So, I said, ‘Where do I go?’ Was it Nashville?  New York?  Not New York. L.A.? No. I think Nashville’s the move because Country music was here at the time and it feels more like a small town.  It’s a big city compared to where I’m from for sure, but it felt more like home to me than the other cities did, so I came here and my motto’s always been, “Don’t quit, never give up.”  I don’t believe in Plan B’s.  It’s impossible to put 100% into two different things.  So, I’m just a guy that had a music dream and was crazy enough to believe that it could happen, and I kept the dream going of eight-year old Jimmie, you know.  I’m thankful for me as a kid because I had that dream and I was able to hold on to it.  So, I’m a guy that appreciates hard work, family, friends, just being honest and staying true to your word.”

When asked to describe his music in just a few words, Allen says it’s “a country lyric wrapped in a pop rock production, with pop and R&B phrasing, to kind of pull you in with the different melodies.  It took me a while to figure out what it was, because when I first moved to Nashville I was too country for pop and I was too pop for country.”  We then had an interesting side chat about “pop country”, where Allen had a great quote, “No matter how pop you think a country song might be, you put that song next to a pop song, it’s country.  You can tell the difference.”

As I said before, Allen is humble. He’s also extremely appreciative for those that came before him and those that helped pave the way for him to do what he does.  Perhaps some of the most controversial artists being played on country radio today are Sam Hunt and Florida Georgia Line, often being accused of being “too pop”, or maybe even, “not country at all”.  Here’s where someone like Jimmie Allen shows that he embraces all the artists that have brought something to the country table.  “I love Sam Hunt.  I’m thankful for Sam Hunt, FGL, Thomas Rhett.  Shania Twain to me is, I believe she’s the first person to really take country pop.” 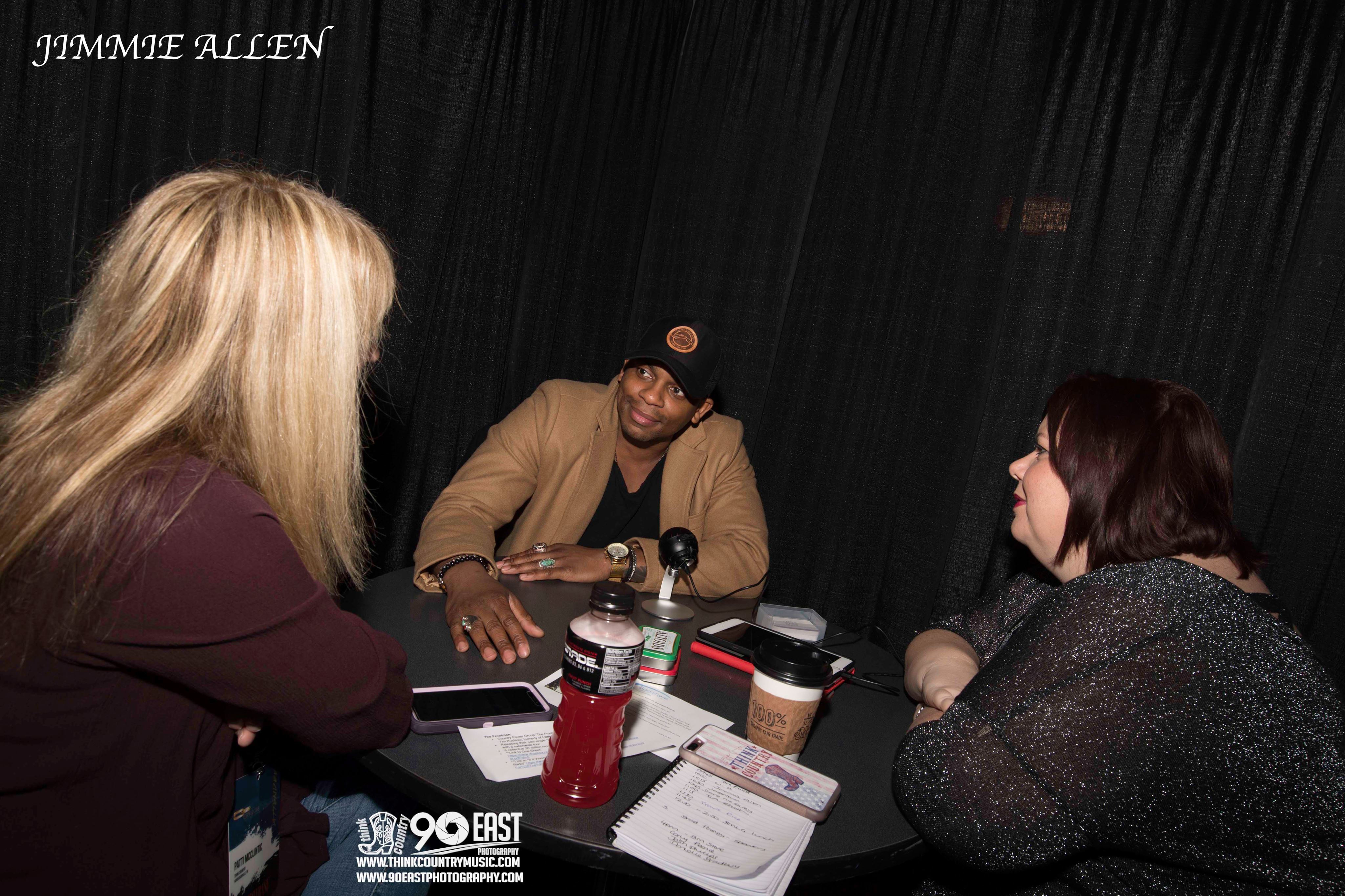 Interviews aren’t immune to flying off on tangents just as talk around the dinner table will, and Shania Twain quickly moved from Annette mentioning how in England, there were three different versions of Shania Twain’s album released, including “the British CD”, which then caused Allen to admit that “The day I meet Shania Twain, I might cry.”  I then interjected with the fact that even artists have that one person they really want to meet.  After all, they are people too, and they do have their idols, and media people do too.  Annette got to mention that she met John Schneider earlier (“Bo Duke” of “The Dukes of Hazzard” and a country artist as well), which was a bit of a dream come true for her, and rather like a game of “Can You Top This?”, Allen casually threw in that he met Garth Brooks the other night.  Said Allen, “I was trying SO hard to keep it together, and man, he was SO nice, that made it even harder!  He was so cool.  It really felt like he was genuinely invested in our conversation, and I’m like, ‘Oh my God, this is Garth Brooks’.”  There was that humility again.  He was intensely thrilled that he had the chance to not only meet, but converse, with Garth Brooks.

The song Allen played at the BBR party was his latest single, “Best Shot” and it’s so good.  We talked about that.  He’s currently doing a radio tour to promote the song and will be doing festivals coming up in the spring and the summer.  Until then, he’s excited and he’s “staying motivated by drinking tons of coffee” and “at the end of the day, I’m so grateful, because sometimes people say it’s so exhausting, but this is what we work for, you know, I’ve seen the opposite end of the spectrum.  I’m getting to travel the world right now and sing songs that I made up.  You can’t beat that.”

We ventured into the realm of co-writes.  Is Allen co-writing?  If so, is he enjoying that?

Aside from “Best Shot”, the five song EP is out now, with no release date yet on the full-length album, but there are 16 songs done and ready for it, which will probably be pared down to 12 for the record.  Allen is excited just to have this first single out for the moment.  “If this single breaks top 10, I’ll be over the moon.  Everybody wants to hit number one, I’ll be happy just to break top 10.”

There’s always an interest from our UK followers as to when new artists will be coming over, so that question was posed next.  “I would love to, as soon as this radio tour is over, to come over to the UK for about two weeks and just hang.  Meet people and play some shows.  Not just meet people in the industry but meet the fans and hang out or grab coffee or go bowling.  Do they bowl in the UK?”

(Jimmie Allen looked at me when he asked that question, to which all I could say was, “I have no idea.  I live here in Hendersonville.”  We all had a good laugh at that one, because I guess I wanted to know just as much as he did.  DO they bowl in the UK?)

Annette assured him that everyone in the UK would love him and it would be good to start building his fan base over there right away, which I think we’re doing as I type, and by telling everyone to definitely get his music and follow his socials.  He’s truly amazing.  In every sense of the word.  As an artist and as a human being.  You really can’t go wrong.

We moved on to one of our favorite questions.  Celebrity bars.  If Mr. Jimmie Allen were to open his own celebrity bar/restaurant in Nashville, what would it be called and what would the theme be?

He was very quick to answer.  “I’m going to call it ‘Betty Ann’s’.  Betty Ann was my Grandmother who died in 2014, she was everything to me.  So, I think the theme, she was into fishing, and she was Native American, so it will be kind of Native based foods, a lot of fishing trophies on the wall.  Just a mix of everything my Grandma was.  The place will just always be filled with love.”

Next, we had Allen dream really big, because he’s already proven to us that he does dream big and he doesn’t quit on those dreams, so this seemed like the perfect question.  In this question, we asked Allen to imagine he’s just been named Entertainer of the Year and he’s about to go out on tour.  Who will he have as his opener, with the sky being the limit.   “Anybody open for ME?  You know what I would do, honestly?  I would find somebody that’s workin’ hard, putting their heart and soul into it, find them and take them out, because I feel like everybody deserves that opportunity.  I feel like if I’ve been blessed to be put in that situation, the least I can do is help somebody else out.”

JIMMIE ALLEN can be found: