We had way too much fun chatting with the band Jagertown during CRS 2018.   I have to note that Jagertown consists of a few members and at any given time, it could be any different band member speaking.  When transcribing a recording, it’s often difficult to recall who it was responding, but if I’m certain, I’ll make note of it.  I should also make mention of this.  JT has a very distinctive voice, so it was really easy to pick him out on tape.  Liz, being the only female in the band, was also a no-brainer, so that’s why they may seem to get more time in this interview, but rest assured, it wasn’t favoritism.  We loved them all. 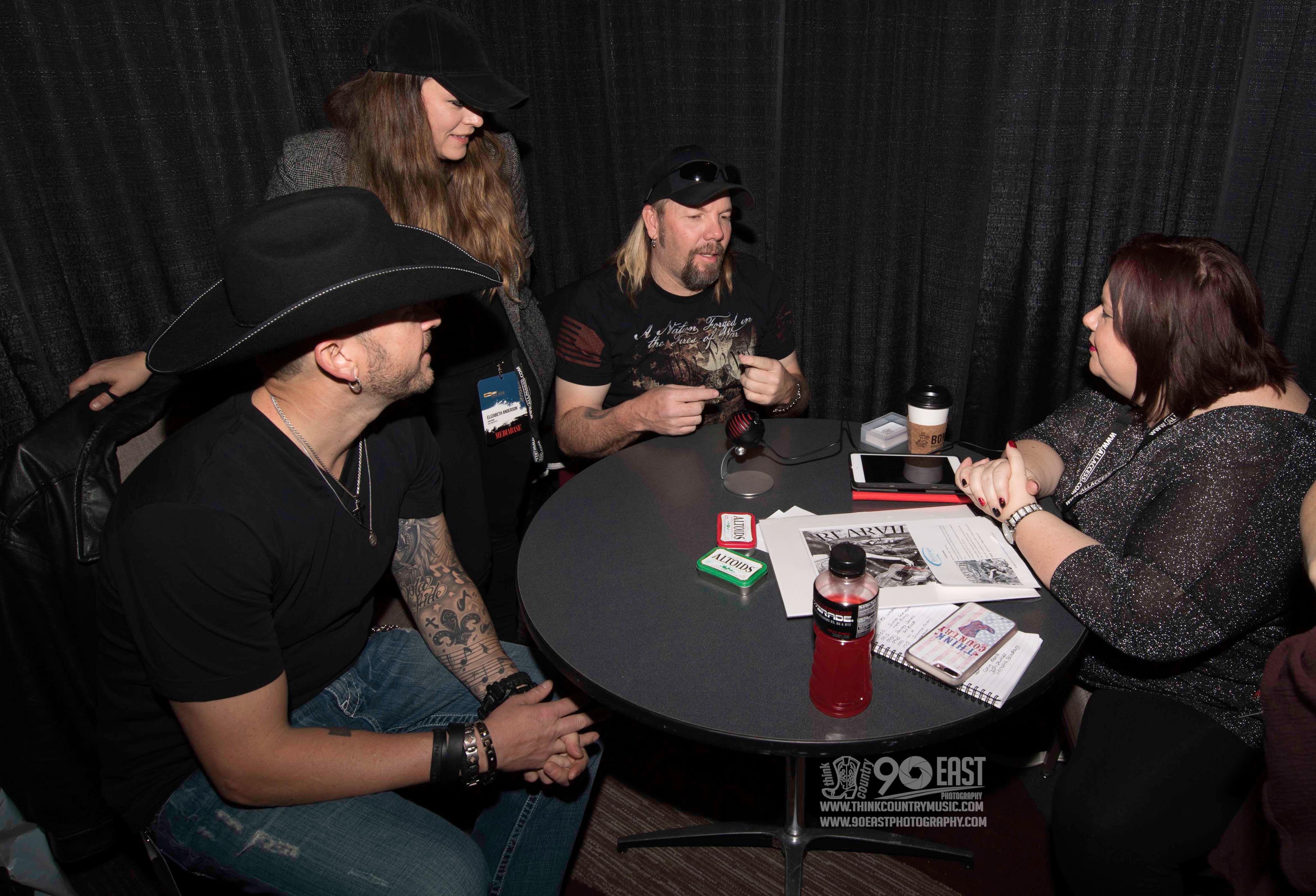 TC:  The last time I saw you guys it was upstairs at The Valentine.  It was CMA Awards week and you went on stage and kind of rocked it.

J:  We try to be high energy.  You should see us when we have a little more room to move.  That was kind of tight!

J (JT):  I compare us to some of the old Garth shows back in the day.  We like to run around and climb on the speakers, so that was a bit…

TC:  When you say violin…

(We are now experiencing a complete free for all and everyone is talking at the same time, but I’ve managed to capture Liz’s voice above the crowd)

TC:  So, what’s going on with you guys?  Do you have a record out at the moment?

J:  So, the last single that we had got to 29 and we dropped it right after the winter freeze, the Christmas break.  We thought that’s where it peaks. “Small Town Superstars” got all the way to 29, which was awesome, it did 50, 51 on Billboard which was great for us, and the real reason we did that show at The Valentine was to come out and record.  So, we were recording at Oceanway (Studios) with Matt McClure, that was how we started our week was with that show, but then we spent the rest of our week in the studio with him and so the new single drops February 12th, and that’s “Rearview”.  So, that’s super fun.

J:  So, “Rearview” (the EP is also called “Rearview”), we cut three songs while we were out (in Nashville) and there’s already a lyric video out so people can kind of preview it, but the song itself, is the idea of drivin’ down the road looking in your own eyes and every now and then you catch yourself in the rearview and you’re thinking, you can only see a little of what’s behind you but you really focus on the future but you’re shaped by where you’ve been.  It’s a shape of moving forward, it’s upbeat, it’s fun, it’s also kind of “look at me now”, you know, I’m putting everything we had behind us.

TC:  Are you going to be doing a radio tour? How are you getting it out there?

J:  Yeah. So, it already was in the Top 15 on iTunes pre-orders, it already got up to 8.  There’s a lyric video.  We’ll be touring, our summer schedule’s going to be awesome.  We’re gonna be going to some places we haven’t been, to the south and the east.

TC:  Are you going to be doing any festivals?

TC:  Rodeos, to me, are America.  (Annette speaking)

J:  If you see the Jagertown bus rollin’ down the road, follow it.

TC:  If you see the crazy Brit following you…

TC (Patti):  Just so you know, I already have you guys on my wall (pulls out a phone picture of a signed Jagertown photo from last year that’s on her office wall).

TC (Annette): From when we met at The Valentine!

(I wasn’t even at that show but ended up with the signed photo via my husband who photographed the show for Think Country.)

TC:  Do you think you’ll ever get over to the UK with your music?

J (JT): I was asked this question yesterday and I put ‘em on the spot by saying that sometimes the hardest part about getting across the pond is we need someone over there, somebody we can say, “Where do we start?”  So, I divert that question to you.  Do you think we’ll ever make it over there?

TC:  I think you will.  Country music is getting so popular, and to see you guys play, you’re fun to watch, it’s a real effect.  You want to get up and dance and that’s what we like.

TC:  We have so many festivals over there that play.

J (JT):  They might take away our passports.  On a serious note, we would love to come over, but it’s so hard.  That’s such a hard jump to make.  You really need someone on the ground over there, some boots on the ground to say, “Hey, here’s so-and-so and they work with so-and-so and I’m going to introduce you.”

TC:  In the next few weeks, I’ll be on social media and sharing your music, and you’ll be touring, especially with rodeos or something truly American, building your fan base, and when you come over, which I’m sure you will, you’ll already have fans over there.

TC:  Alright, a couple of questions we’ve been asking everybody.  In Nashville, on every corner, there is a celebrity bar, and you are opening your own, what are you going to call it and what is the theme going to be?

TC:  What kind of theme is it going to be?

J:  I think one thing I haven’t seen is daily Jager luges, you know, ice filters.

TC:  I have never done a Jager luge.

(I don’t believe we ever did get the explanation for that mural.  I’m calling on a representative from Jagertown to flip us a message about that as soon as possible.)

J (PC):  Jager shots, but what I think we really need is a lot of beautiful cocktail waitresses and how about some beef?  Some men, for the ladies.

J (PC):  Something for the girls and the guys.  Fair is fair.

J (JT):  Booty shorts with a gunbelt with shots in it.

(Once again, everyone is talking all at once, which indicates this bar is already off the ground and no plans have even been drawn up yet.)

J (PC):  I honestly think this would sell because there’s a lot of girls out at the clubs, even more than guys.  Good lookin’ guys servin’ test tube Jager shots.

TC:  Alright, now you’re top of the game.  You’ve just won Vocal Group of the Year, you’re about to go out on your big tour, who will be opening for you? Anybody.  You are on top of the world.

J (PC):  I like it when they do a tour that you don’t expect.  Two people together that, you know, I think that would…

J (JT):  I’m going with Haggard man.  Haggard, yeah. Just so we can hang out, ‘cause if Haggard’s there, Willie will eventually show up.  I know how to build a party.

TC:  Any venue in the whole world?

(Clearly, they’ve discussed this before)

J (LA):  I saw The Allman Brothers there, and I was about as far away from them as I am to you, and it was… (sound effect similar to what you make after tasting the best cake ever)

TC:  We’ve been asking artists what piece of unique merch they would come up with to sell at their shows, but I think you’ve already got it.

(Jagertown now has their very own limited-edition artwork called Litholyrics which simply can’t be described in words.  You MUST go see these on their website or social media sites.  The band was generous enough to gift Think Country with one of these gorgeous pieces of artwork and it now proudly hangs on the wall of the Nashville office.  Litholyrics are one of a kind and are unique to Jagertown. This is the merch item in which Think Country is referring to.  They have certainly won the prize in originality.)

J:  I think three chords and the truth.  There are some great genres of music, but country music is a storytelling genre.  There’s a lot of heart in it, and it’s something that resonates with people on that level.  We want to be approachable.  The reason people want to relate to the music in country and the artists that make it is the songs are relatable.

TC:  Like last night, we were at the Big Machine party, and every artist there, everybody took time to meet you.  You wouldn’t get that with any other genre.